T.M. Shackley and his sister, Margaret, had been up to the ranch about one and one-half miles northeast of Mr. Shackley's home. As they returned, they saw an Indian on a high peak, spying over the surrounding country. This was early in the day. Dave Roberts and Alex Pickett took a bucket and pretended to be going for water. When they reached a ravine and disappeared out of the Indian's view, the two then slipped up the mountain, and at an opportune time, each fired and the Indian fell dead on the ground. A second Indian jumped up and the two also shot at him. It has been supposed they also gave him a mortal wound, for the body of a second Indian was later found not far distant from this point. Five or six other Indians under the hill soon appeared on the scene and charged Dave Roberts and Alex Pickett. After considerable fighting the two whites made an orderly retreat back to their ranch quarters. This episode occurred about 1858 in the Resley's Creek Community, about four miles northeast of the present town of Lampkin in Comanche County.

Ref.: Before writing this section, the author interviewed Geo. W. White of Hamilton, who lived in the Resley's Creek Community about this time or shortly afterwards. 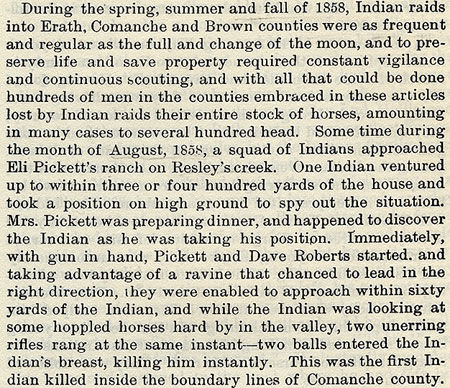