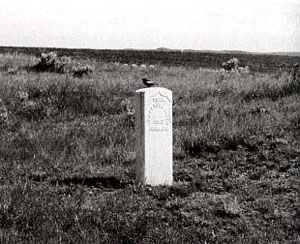 2 September 1864, Marmarth, North Dakota: Capt. James L. Fisk was leading 200 emigrants and gold-seekers in 88 wagons to the mines of Montana. At Fort Rice, on the Missouri River, Fisk begged for an escort, and 47 soldiers, led by a Lt. Smith of Company A, Dakota Cavalry, headed out with the train on 23 August. Brig. Gen. Alfred Sully was not happy to be responsible for yet another group of emigrants and feared trouble.

On 2 September, about 130 miles west of Fort Rice, Sully's fear was realized. In the gully of Deep Creek, about 12 miles east of present-day Marmarth, North Dakota, a wagon turned over, and two other wagons stopped to assist. Leaving nine soldiers behind as guards while repairs were made, the rest of the train moved on. Soon Sitting Bull and 100 Hunkpapa Sioux attacked the isolated wagons, cutting down most of the defenders in the first fe minutes. One soldier did manage to put a bullet into Sitting Bull's hip, and White Bull and Jumping Bull pulled their chief to safety.

A mile ahead on the trail, Fisk and the others heard the gunfire. After corralling the train, Fisk hurried back with 50 soldiers and civilian volunteers. A scout, Jefferson Dilts, moet one of the survivors running toward the wagon train. By the time Dilts reached the scene, the Hunkpapas were looting the wagons. Recklessly Dilts charged. Blasting away with a carbine and a six-gun, he shot six Hunkpapas before reining his horse around. He did not retreat fast enough, however, and took three arrows in the back.

Fisk and the rest of the rescuers, running square into the Hunkpapas, quickly forted up and fought until sunset. After dark they crept back to the corralled wagons. The Indians did not show up.

Ten soldiers and two civilians, including Dilts, were killed. Six Hunkpapas were killed, most or all by Dilts, and Sitting Bull was wounded. From the wagons, the Hunkpapas looted rifles and 4,000 bullets, plus liquor and cigars.

The wagon train continued a few miles the next morning, but the Indians attacked again. Fisk corralled the wagons again and the soldiers and emigrants built sod walls for cover, naming their fortification Fort Dilts after the brave scout. They stayed holed up for several days, suffering no casualties. On 5 September, over 400 Indians probed the earthworks, but the defenders held out. That night, Lt. Smith and 13 men crept out and rode to Fort Rice for help. The train members waited at Fort Dilts for two more weeks before an angry Sully dispatched 900 men to rescue them. On 20 September, the Fisk party was escorted back to Fort Rice.