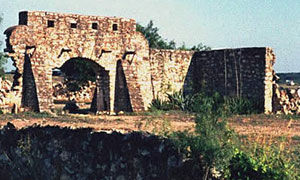 Today the presidio (Spanish for "fort") lies in ruins, but it is not hard to imagine how it looked at its height in the mid-1700s, when it was home to more than 300 Spanish soldiers and civilians, some of them women and children. You can picture the soldiers practicing drills in the presidio's open courtyard while herders tended cattle and farmers worked the nearby fields. With imagination, you might catch a whiff of fresh-baked bread and meat roasting on a spit or hear children playing in the courtyard. But then, suddenly, the reverie ends with the shout "Fore!" followed by the sharp thwack of a metal club striking its target, and then the quiet thud of a golf ball finding purchase on the green.

Photo by Charles M. Robinson, III from the book, Frontier Forts of Texas.

Today, Presidio San Sabá lies just outside the town of Menard, Texas, at the western edge of the Texas Hill Country. The presidio sits amid Menard's Municipal Golf Course, not far from the clear, winding San Saba River. The standing stone ruins are evocative, but they are not from the original 1760 stone construction. Instead, they are the remnants of a past project to reconstruct the presidio. In 1936 and 1937, a crew hired by the Texas Centennial Commission and paid for by a grant from the Texas Legislature reconstructed the northwest portion of Presidio San Sabá as a tangible reminder of the past. These reconstruction efforts, relatively faithful to the design of the original presidio, began to deteriorate not long after their completion. Today they are just a ruin, another crumbling testament to Texas history.