When I found myself buried in a mishmash of stories and pictures, I convinced Lea Ann (Sloan) Rector to work on my database. It turned out that she is a descendant of Capt. Sloan of the Sloan/Journey Expedition into the Trinity Valley and a paternal tie to Cynthia Ann Parker. Her enthusiastic interest in the history of the frontier sustained our efforts to do this site right.

Steve "Cowboy" Murrin suggested Fort Worth tourists could sure use a good day-trip out west and I orignally tried to keep that in mind. I have visited most of the important sites and always tried to hunt down the local historians in the area. I began in Fort Worth meeting Judge Steve King. He graciously gave me, not only his time, but copies of maps and pictures as well as interesting insights into the history of North Central Texas. Sometime later I visited Mr. and Mrs. Jack Loftin in Archer County. He is the author of the "Trails of Archer County" as well as the creator of a historical map of North Texas that first sparked my desire to hunt down the location of specific stories. I showed them my preliminary notes and they recommended several books including J. Evetts Haley's, Charles Goodnight, Cowman and Plainsman. Mr. Loftin took me out to a location on his ranch where there were ancient wagon tracks that were proof of the heavy traffic, century's old, between Cottonwood and the other landmark springs of the area.

Lea Ann and I ventured into Palo Pinto County one day and on the advice of some Lone Camp residents, visited the Ramsey ranch a few miles northeast of town. The ranch had a Rube Goldberg type of security system. When the gate was opened, an elaborate rope and rock system activated an alarm that I recall sounding like a braying goat. Almost immediately Mr. Ramsey shuffled out to welcome us. We showed him our notes and he corrected some things about the Wilson-Acres event and showed us the location of Fort Stubblefield to the south. He let me try out his electric guitar; it turns out we all shared a weakness for Ernest Tubb and Lefty Frizzell. 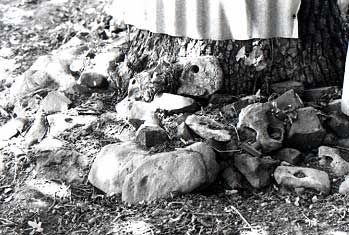 Next chance I had, I returned with an artist couple, Bert and Leon Walters; they'd introduced me to Dutch and Mary as well as "Cowboy". We toured the yard and he showed us his collection of holes. He had two kinds; one were limestone pieces that had been worn by weather or perhaps human hands in the past. The other were his Martin houses overhead. The first being handy to hold in front of your eye to isolate a view in the distance and the second being a natural nesting attraction to the mosquito eating birds. By the way, Leon's the same Walters whose forefather shows up on a plaque on the jailhouse wall in Granbury as well as a historical monument in Glen Rose and Bert is as close as you can get to royalty in Texas. Forefathers on one side were Canary Islanders who were re-settled in San Antonio in the early eighteenth century and those on the other, were members of Austin's colony's original "three hundred". The rest of the day we drove the Cross Timbers while I alternately played disc jockey and story teller. As we approached Fort Worth, Bert suggested that it would be neat to have a tape so that people could listen to the stories while they made the drive. It's been tried since by others though their efforts weren't very successful. I hope that another try, with the aid of new technology, might work better. 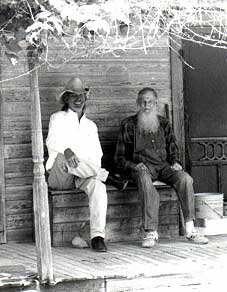 Steve"Cougar" Nichols is an old friend and an exceptional songwriter but around here, we call him "Scout". Fortunately for us, he is passionate about getting the locations of these historic events correct and working on the stories has inspired him to write more than a half dozen original songs based on the events. Several additional people have provided invaluable technical help as the site has grown. Brian Sharp provided first aid for our first growing pangs and Bob Ballew not only provided us with much of the original expertise to launch our web site but also a terrific introduction. Mike Shropshire has given me direction and inspiration as well as quite a few illuminating essays including his own introduction.

I would like to credit anything good that comes from this site to two men who are most responsible for its existence. The first was my father, Netum Steed, my original historical source concerning the Indian wars. The second was my art dealer, Dutch Phillips. He promoted my work, encouraged me to paint and more importantly, to think in historical and cultural terms. He was a central figure in North Texas' vibrant art community. This is, of course, just a short list of my heroes. My earliest influences were the friends and teachers at UNT's art department in the late 60s, particularly Bill and Mickey McCarter, Flip Higgins, Henry Whiddon, John Anderson, Richard Davis, and Roy Wilce. 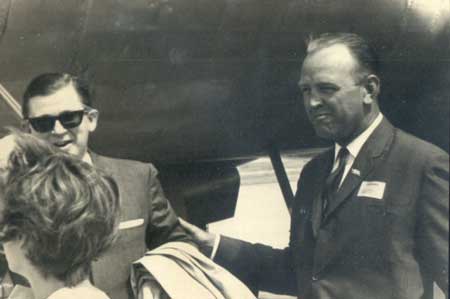 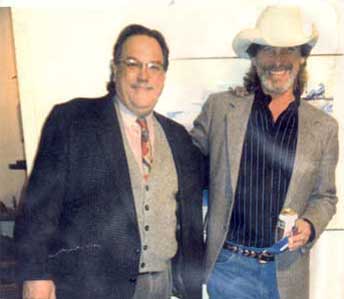 My father (right), arriving in Washington with Senator Tower

Dutch and Me (photo by Bob Wade)