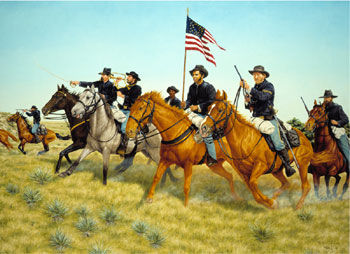 The siege continued until September 21, although the Indians made no major attempt to assault the island after the second morning. By the end, the men faced more of a threat from lack of food than from Indian bullets. The ordeal ended when four men who managed to get away at night returned with a 10th Cavalry relief column, commanded by Captain Louis Carpenter. The Battle of Beecher's Island, named for Lieutenant Frederick Beecher, became a staple of Western folklore. A good defensive position and Spencer repeating rifles kept the Amy casualties lower than might have been expected. Six of the troopers, including Beecher, were killed, as opposed to an estimated thirty on the other side. Among the Cheyenne killed in action was the noted chief, Roman Nose.

Having gone into action as a wholly inexperienced unit in September, Carpenter's 10th Cavalry had found themselves very much in the thick of the action. In October, they would be involved in the biggest battle to take place in the theater since Beecher's Island.

The chain of events leading up to this point began on October 12, 1868, when a large patrol out of Fort Harker in central Kansas was reported as overdue. On the first of the month, Major William Royall had gone out with elements of seven companies of the 5th Cavalry, and had not been heard from-so the 10th Cavalry, together with additional 5th Cavalry elements under Major Eugene Carr, was sent out to search for them. Before the two units would run into one another, they would each find themselves in hostile action.

On October 14, Royall's camp on Prairie Dog Creek was attacked by a Cheyenne group under Tall Bull, and Royall's detachment lost one man in a brief firefight. Carr and Carpenter reached the same stream at a different point, saw no evidence of the battle, but picked up the trail of the Cheyenne and some Lakota. At midday on October 18, the Indians attacked, so the troopers established a defensive perimeter on a hilltop. The Indians launched repeated assaults until evening, when they broke off the attack. Carr's men suffered a few wounded but no losses, and the Indians lost a reported ten killed in action. One Indian was captured, and he betrayed the location of a large encampment of Cheyenne and Lakota who were off the reservation and in violation of the treaty.

Carr and Carpenter reached Fort Wallace on October 22, where they learned that Royall's command had safely reached Buffalo Tank Station on the Kansas Pacific Railroad. Carr then prepared for a mission against the Indian village about which he had learned from the prisoner captured on October 18. Carr's 480-man force made contact with a group of Indians on October 25, so their arrival at their village the following day was not a surprise.

The troops caught the Cheyenne and Lakota in the process of breaking camp and attacked. This engagement, like the one the previous week, cost the Indians an estimated ten lives, with the only cavalry casualties being a few wounded. As the battle wound down, Carr's men destroyed captured supplies and gave chase, but the Indians split into small groups and got away.