Crook and Reynolds suffered through a severe blizzard during the second week of March as they searched the valleys for sign of their elusive quarry. On March 16, they were working their way along the tongue River, when they caught sight of a pair of Indians. Crook ordered Reynolds to take six companies and pursue them, while Crook waited with the slower elements of the command.

The following day, Reynolds crossed into the valley of the Powder River, and came upon an encampment containing an estimated seven hundred Cheyenne and Oglala Lakota. The troops attacked but they were hit by gunfire from the high ground surrounding the camp. Reynolds ordered a tactical withdrawal, which was executed amid confusion and disorganization, and with the loss of four men killed in action.

The following morning, the Indians attacked Reynolds's camp, taking back the horses. Once the column had struggled back to Fort Fetterman through the deep snowdrifts, Crook ordered Reynolds to be court-martialed for bungling the attack and essentially losing the Battle of the Powder River.

There were moments of heroism in the Powder River Fight. Hospital steward William Bryan was awarded the Congressional Medal of Honor for having "Accompanied a detachment of cavalry in a charge on a village of hostile Indians and fought through the engagements, having his horse killed under him. He continued to fight on foot, and under severe fire and without assistance conveyed two wounded comrades to places of safety, saving them from capture." Other Medals of Honor went to two men of Company M, 3rd Cavalry, blacksmith Albert Glavinski and Private Jeremiah Murphy. The latter, "the only member of his picket not disabled, attempted to save a wounded comrade." 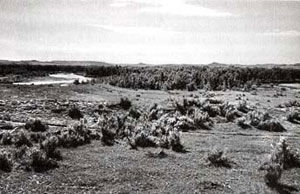 1, 4, 5, and 8 September 1865, Powderville, Montana: As Brig. Gen. Patrick E. Connor led the Left Column of the Powder River campaign, the other two columns were having a tough time of it, troubled by troops near the end of their enlistments who were threatening mutiny. Col. Nelson Cole's Right Column left Omaha on 1 July with 1,400 men who made up eight companies of his own 2nd Missouri Light Artillery, equipped as cavalry, and eight companies of the 12th Missouri Cavalry. Col. Samuel Walker led the Center Column out of Fort Laramie on 5 August with 600 men of his own 16th Kansas Cavalry and a detachment of the 15th Kansas Cavalry.

The two columns met northwest of the Black hills and continued north along the Little Missouri River, then crossed west through badlands to the Powder River, where they ran into serious trouble. On 1 September, as the men camped near the junction of Alkali Creek and the Powder River, about 300 Lakotas of the Hunkpapa, Sans Arc, and Minneconjou band attacked the soldiers' horse herd a mile from camp. Capt. E.S. Rowland and six men responded and were cut to pieces. Only Rowland escaped.

Cole and Walker marched the men downstream to the mouth of the Mizpah River, plagued by poor grass and cold, rainy weather. About 200 horses and mules perished. On 4 September, the column marched back upriver. A detachment of the 12th Missouri Cavalry, sent back to destroy some of the column's own abandoned property, were jumped by Indians but beat them off.

The next morning, warriors tried to cut off the column's herders, starting a three-hour fight that engaged over 1,000 Lakotas and Cheyennes. The Indians made several attacks, hoping to draw the troops out in pursuit. The Cheyenne Roman Nose made several brave runs in front of the soldiers' blazing guns and remained untouched. The howitzers kept the Indians at bay but killed only an old man named Black Whetstone. Several soldiers were killed in the battle.

The Cheyennes left the scene and moved east to the Black Hills, leaving the Lakotas behind to harass the soldiers as they moved upriver. The Lakotas attacked the column on 8 September, but artillery held them back. That night a great hail-and snowstorm struck and continued through the 9th, forcing the soldiers to hole up in the vicinity of present-day Powderville, Montana. About 400 horses perished, and the famished soldiers pounced on the carcasses.

When the weather abated Cole and Walker's men limped farther up the Powder, constantly dogged by warriors, but there were no more serious engagements. On 13 September, Connor's scouts found them and directed them to continue 80 miles upriver to the newly built Fort Connor, which they reached on the 20th.

Cole reported 12 men killed, with 2 missing, presumed killed. He reported only 1 man wounded, but Lt. Charles H. Springer of Company B, 12th Missouri Cavalry, reported at least 4 wounded in the engagement on 5 September alone. Cole estimated they might have killed 200 warriors, an extremely high number. Springer estimated a more likely figure of 20. Walker, although he saw a number of Indians shot off their horses, aid in frustration and anger, "I cannot say as we killed one."

Although the Powder River Expedition kept the Indians away from the Overland Road for some months, it was not a great success. About 700 government and civilian horses and mules died, along with much property abandoned and destroyed.