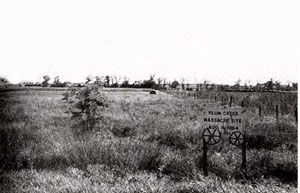 8 August 1864, Lexington, Nebraska: In addition to raiding along the Little Blue River, Cheyennes attacked along the Overland Trail west of Fort Kearny. Two miles west of the Plum Creek stage station, on the south side of the Platte River southeast of present-day Lexington, Nebraska, Mart Bowler's corralled bull train was breaking camp when Cheyennes attacked. .With an arrow piercing his buckskin vest, 14-year-old bullwhacker William Gay fired a shot to alert his comrades, who blasted away. The Cheyennes rode right into the circle of wagons, but the teamsters managed to drive them out. After circling a few times, the Cheyennes disappeared, leaving behind two of their own dead and three wounded teamsters.

The same morning, about five miles east of the first attack, a wagon train heading west-consisting of three wagons of Thomas F. Morton, three of William Marble, and six of Michael Kelly-was charged by 100 Cheyennes from bluffs to the south. Some believed there was no cause for alarm at first, but James Smith and his wife urged their team into a run and peeled away from the rest of the wagons. Mrs. Smith jumped from the wagon and hid in the cattails as he husband rushed on.

The warriors swept in and the teams scattered. Nancy Morton, age 19, began to run. She saw her cousin and brother firing at the Indians, but she saw both die before she was captured. Thrust up behind a Cheyenne rider, she noticed she had arrows in her thigh and left side. The Indians also captured young Danny Marble.

At Plum Creek Station, Bowler's bull train had arrived, but they had only one rifle and some short-range weapons. Lt. Joseph Bone, Company G, 7th Iowa Cavalry, was unable to do more than telegraph a message to Fort Kearny. But it was too late. The Cheyennes disappeared with their 2 captives, 13 emigrants dead in their wake.