Will Peters came to Palo Pinto County in 1856 and located over at old Black Springs near the present town of Oran. Before the War he moved to Palo Pinto and for a time, worked for Styles, who ran one of the first stores of "Old Golconda." While here Will Peters became acquainted with and married Lizzie Bell, a daughter of Valentine Bell, also early settlers in Palo Pinto County. At the time of his death, Mr. and Mrs. Peters had one child, named Susie.

March 1st, 1863, the next morning after B.F. Baker was killed, Wm. Peters who lived on Ioni, about fifteen miles west and south of Palo Pinto, started to the latter place to transact some business. On this particular morning Wm. Peters was riding a very slow horse. Before he left home, however, his wife asked him to ride a better pony, but he replied that it would be too much trouble and require too much time to drive up and saddle another. So this pioneer started toward Palo Pinto. When Will Peters reached the eastern edge of Dodson Prairie, he was assaulted by the same band of Indians that killed B.F. Baker during the preceding day. Peters, who was armed with a pistol, hurried on to the old Geo. Hazlewood house, which stood near the present McDonald Dipping Vat, about four and a half miles west of Palo Pinto. This old deserted log cabin, built by Geo. Hazlewood about 1858, proved to be of poor protection particularly because of large cracks in the walls. Peter's pistol was carried away, but it was perhaps fired out before his death. Will Peters was evidently shot through the crack of the building. He was not only fatally wounded above the eyes, but his face was powder burned. This and other things have caused a few to conjecture that Peters was not killed by Indians but by some one of his own race. Nevertheless, he was no doubt, scalped through the cracks of the log cabin.

Peters was buried in the upper graveyard about one mile southwest of Palo Pinto.

The person that found Will Peters came to Palo Pinto and reported the Indians had killed Nath Darnell. But when citizens hurried to the scene, W.L. Lasater stated that it was not Nath Darnell, but William M. Peters.

It is singular to note that the old house in which Will M. Peters was killed by the Indians, was erected by Geo. Hazelwood, who was also slain by the savages, March 1, 1868, exactly five years after Peters was killed.

Another unusual thing about the death of Will Peters is the inscription on his tombstone. It is: "William M. Peters, Born August 23, 1833. Died February 29, 1863." Since 1863 was not a leap year there was no such date as February 29, 1863. But the author interviewed no less than twenty-five people who lived in Palo Pinto County when Peters was killed and practically all stated that he was killed the succeeding day after the death of B.F. Baker, mentioned in the preceding section.

Since we have conclusive evidence that B.F. Baker was murdered Feb. 28, evidently Will M. Peters was killed March 1,1863, and the person who wrote his inscription inadvertently gave the date of his death as Feb. 29, for he knew it occurred the next day after the death of B.F. Baker.

Further Ref.: Probate Records of Palo Pinto County, and the tombstone at the grave of Mr. Peters.

The following second version of the story is from the book, Indian Depredations in Texas, by J.W. Wilbarger. 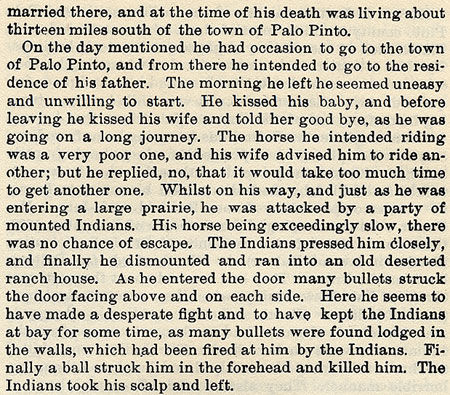