George Crook was sent to Fort Boise in 1866 as commander of the 23rd Infantry Regiment and tasked with a mission similar to what he would later face in the Southwest. Under terms of a treaty negotiated in 1864, the tribes of the upper Great Basin, including Klamath, Modoc, and Paiute bands, had agreed to settle on the Klamath Lake Reservation in southern Oregon. However, not all of the band within these tribes subscribed to the treaty, and raids against travelers and settlements occurred throughout eastern Oregon and southern Idaho Territory. Crook's first job after the Civil War was to bring the outlaw bands into compliance.

On December 18, 1866, he went into the field with forty-five men of the 1st Cavalry in pursuit of a band of Paiute raiders in southern Oregon. Eight days later, he successfully ambushed them on the Owyhee River, killing 30 and capturing seven. A month later, on January 29, 1867, Crook's 1st Cavalry troopers ambushed another renegade Paiute band at Steen's Mountain, killing sixty and capturing twenty-seven. His aggressive campaign continued into summer . In July, he led one hundred 1st Cavalry troopers and about the same number of Indian scouts on a sweep through the region that netted forty-six Paiute killed or captured.

In September 1867, Crook led his command into the desolate lava beds of northeastern California, which were recognized as some of the most difficult terrain in which any of the Indian Wars would be fought. On September 26, Crook led a 280-man mixed force of 1st Cavalry and 23rd Infantry Regiment troops against a hundred-man force of mainly Paiute warriors who had taken up a defensive position in a section of the lava beds known appropriately as Infernal Caverns. In two days of fighting, Crook had killed twenty Indians and had captured or wounded another fourteen, but he had lost eight of his own men.

Crook's relentless campaigning eventually achieved the desired objective. On July 1, 1868, Weawea, the last of the outlaw Paiute leaders, came into Fort Harney in central Oregon to sign a treaty agreeing to live on a reservation. He credited Crook with eventually wearing him down. The U.S. Army also recognized Crook for his accomplishment. General Halleck, the divisional commander, made him the acting head of the Department of the Columbia, a post he would hold until his reassignment to the Southwest-despite Crook not having a permanent general's rank.

To the west on the Pony Express Route, the fight at Dry Creek Station in June of 1860 was a harbinger to the Paiute War. The following picture and story are from the book, Encyclopedia of Indian Wars, by Gregory F. Michno. 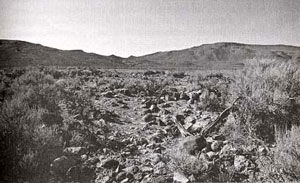 16 June 1860, Austin, Nevada: Si McCandless ran a small trading post at the Dry Creek Pony Express station near the Simpson Park Mountains, in present-day Lander County, Nevada. McCandless lived with a Paiute woman, and when her tribe asked him to bring her back, he refused. Soon he noticed several of the woman's relatives hanging around the trading post, and he warned the Pony Express workers of impending trouble.

One morning, when stationkeeper Ralph M. Lozier opened his door to fetch water, a Paiute shot him down. Another Pony Express employee, John Applegate, ran to the door and was shot in the hip and groin. A third worker, Lafayette "Bolly" Bolwinkle, who had been asleep inside, bolted out of bed, grabbed his gun, ran to the door, and started firing. McCandless dashed across the road from the trading post and forted up with Bolly. They piled grain bags across the door and exchanged shots with the angry Paiutes. Applegate, in excruciating pain, asked for a revolver to shoot at the Indians , but instead shot himself in the head.