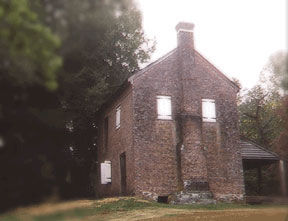 This 210-acre park, on Oconee Creek in the foothills of the Appalachian Mountains, contains two historic structures: a stone blockhouse (fort) known as Oconee Station and a two-story brick residence known as the William Richards House.

The blockhouse was constructed around 1792 as one of a chain of such buildings established during a period of tension between white settlers and the Indians. Oconee Station was the last blockhouse to be decommissioned in the state. The troops were removed in 1799.