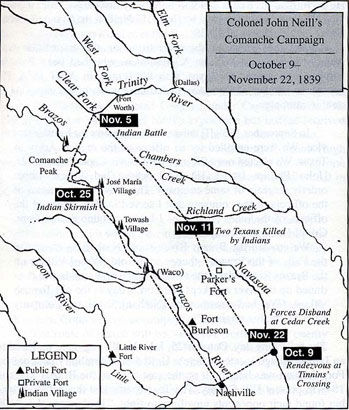 The troops had forty days rations, and beeves enough with them for the whole campaign, and that the late rains having filled the streams, the supplies of water will be abundant.

The troops from the different counties seemed to harmonize, and feel an honorable spirit of emulation to excel in the strife with the enemy.

We crossed the Brazos River at old Nashville-thence to the Falls of the Braozs-thence to the old [Waco] Village on the Brazos River where the town of Waco now stands. We continued up the river and kept one Lord's day at the old Towash village. [We] had a sermon by [Nathan] Shook [of Company E], a Methodist minister.

On October 25, the rangers attacked Chief Jose Maria's village on the bank of the Brazos in present-day Hill County. The Anadarko chief and his band of about one hundred warriors from various tribes had recently been victorious against Bryant's rangers, north of the falls of the Brazos in January 1839. Hamblen further reported...

..."a part of two tribes, Ionis and Keechies." The Indians chose to flee instead of fight their foes and made their escape through thick brush except for "the Ioni chief, who was killed near the village. We captured all their camp equipage and about forty Indian ponies."

The Texans followed the Indians over Comanche Peak to the bend of the Clear Fork where Hamblen reports on November 5 they fought "a small squad of Indians and killed two of them" and on November 11, "we continued our march between the Trinity and Brazos in the direction of home. On Richland Creek, we got two men killed by Indians. They left the command and were shot before they went two miles. Their names were Earle and Whepler and [were residents of] old Nashville on the Brazos.

Col. Neill, who has command of the drafted forces ordered up the Brazos, has returned from the pursit of the Indians. They are supposed to be embodied in considerable numbers, on that river, about 150 miles above the falls.

The settlements on the Brazos are more exposed than any other portion of the frontier; and we hope the Government will place an adequate force on that river for their protection. They have suffered greatly, and some of our best citizens, with a large amount of property, may be sacrificed, unless timely protection be furnished.

The following are two different versions of the same story mentioned above.

October 25, 1838, about eleven years before the establishment of the above fort, Colonel O'Neal and his companions engaged a party of Comanches in a bloody battle. As usual, the Indians were heavy losers and after a large number of their warriors had been killed, they fled from the scene of action. The Texans took charge of their camp, which was known as Jose Maria Village.