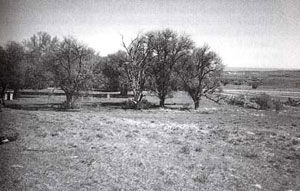 4-6 February 1865, Dalton Nebraska: After their second attack on Julesburg, the Cheyennes and Lakotas who had raided along the Platte in January moved their village to Lodgepole Creek, south of Mud Springs. Mud Springs, in a small, boggy, bowl-shaped valley, was the only water source between Lodgepole Creek and the North Platte River.

On 4 February, an advance party of warriors ran off a horse herd that was grazing near the Mud Springs telegraph station. Defending the station was a small force of nine 11th Ohio Cavalrymen and five civilians. The operator tapped out messages to Forts Laramie and Mitchell for help. Col. William O. Collins started immediately from Fort Laramie with 120 men from various companies of the 11th Ohio Cavalry and part of Company D of the 7th Iowa Cavalry. From Fort Mitchell, Lt. William Ellsworth took 36 men of Company H, 11th Ohio Cavalry.

After a tough march, Ellsworth reached Mud Springs Station on the morning of the 5th. The 1,000 warriors who arrived to attack that day were surprised by the increase in soldiers, but they surrounded the place and peppered it with bullets. The buildings were almost impregnable to small arms fire, however, and the soldiers fired through loopholes cut in the walls. Some warriors crept closer to shoot, but neither side would come out in the open to fight. The soldiers then tried a ploy. They turned loose the stock in the corrals, and the Indians, finding the bait more attractive than desultory firing at buildings, scattered after the animals. The fighting died out for the day.

The next morning, Collins, after a grueling march that gave many of his men frostbitten limbs, made it to the springs. The Indians, planning to renew their assault, again found more soldiers opposing them. Collins placed his men outside to keep the Indians out of the valley, but the character of the ground allowed for only hide-and-seek action, with men popping up to shoot and ducking down to dodge. About 200 Indians got within 75 yards of the corral and angled a mass of arrows into it, hitting horses and men alike. Collins organized two charges to clear the ground, then dug a rifle pit to squelch trouble from that direction.

After four hours of fighting, the soldiers expanded the perimeter and drove the Indians out of the valley. According to cheyenne observer George Bent, the Indians just got tired of fighting and left. Collins estimated that they hit 30 Indians; Bent said no Indians were killed. Collins reported 3 soldiers killed and 4 wounded.