The following is from the Picture This, Early California web site. 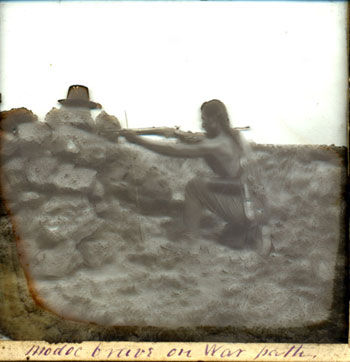 The Modoc were one of the last of the tribes impacted. For hundreds of years, the traditional homeland of the Modoc people was the area around Tule Lake in remote northeast California. In 1864, in response to demands from American settlers and miners, the Klamath Reservation was established in southern Oregon and the Modoc were ordered to move there. In the spring of 1870, a group of approximately 175 Modoc, including fifty to sixty warriors under Kientpoos (called Captain Jack by the local miners), left the reservation and returned to their homeland. In 1872, Army commanders were ordered to return the Modoc to the reservation, "peaceable if you possibly can, forcefully if you must."

In the early morning hours of January 17, 1873, a force of 400 cavalry and infantry attacked the fifty Modoc defending their stronghold, an area of rugged lava beds, ledges and cliffs south of Tule Lake. The Modoc were only equipped with ancient muzzle-loading weapons, but they knew the terrain and used it skillfully. During the daylong fight, about forty U.S. soldiers were killed or wounded while the rest were forced to retreat.

Following the killing of the unarmed U.S. Army commander, General Canby, who was meeting with Captain Jack and other warriors in peace talks, the U.S. Army decided to assault the Modoc stronghold again. On the morning of April 15, a force of 600 soldiers moved against the Modoc positions. After a two-day battle, the Modoc were forced to abandon the lava beds and flee to the southeast. During the retreat, the Modoc began to break up into small groups. One of these bands was captured and agreed to track down Captain Jack and bring him in. Jack and the remaining Modoc were found and forced to surrender on June 1. On October 1, 1873, Jack and six other Modocs were hanged for murder. The surviving Modoc were sent to reservations in Oklahoma. In 1909, those who were still alive were allowed to return to the Klamath reservation in California.

The following story is from the book, Encyclopedia of American Indian Wars, by Jerry Keenan. 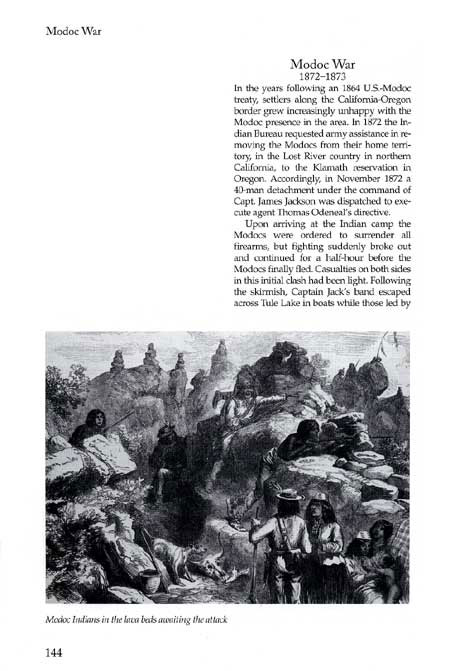 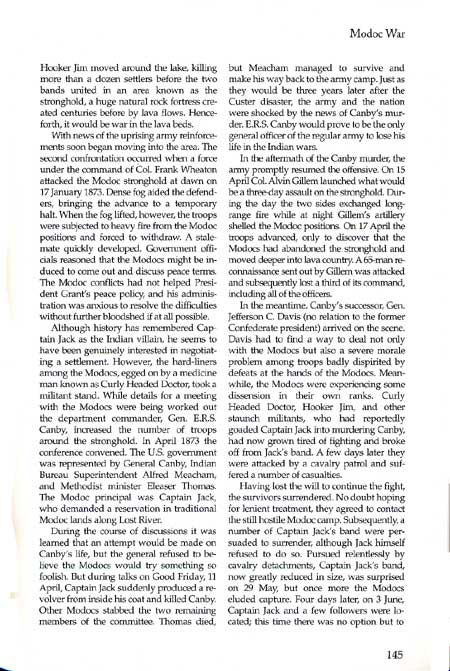 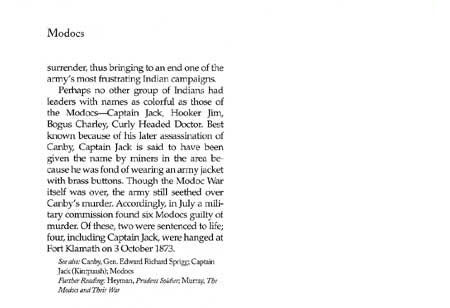