"Mobeetie" is supposed to mean "Sweetwater" in one Indian dialect or another. According to T. Lindsay Baker's Ghost Town's of Texas, when the application for a Post Office was rejected because Sweetwater was already taken, they got the idea to submit it as an Indian word. So a man was sent to the Fort (Elliot) to ask for a translation from an Indian Scout.

He came back with the name Mobeetie, which might mean Sweetwater or "Why do you want to know?" or "Buy me a drink and I'll tell you." If the scout misheard, it might even mean "Beetwater." Anyway, it's too late now. By the way, the Fort was Fort Elliot, not the guy who went to get the translation.

It's original name was Hidetown in 1874, when it was a supply center for buffalo hunters. 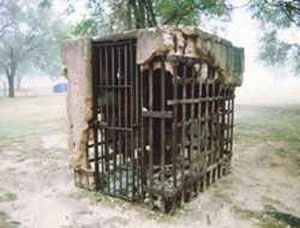 A jail was built in the early 1880s and a Texas Ranger Captain Arrington became the sheriff. Temple Houston, son of Sam, served a term here as District Attorney before he became a State Senator.

In 1878, the town moved a little closer to the Fort. Evidently the Fort didn't like to be crowded, because the soldiers packed up and left in 1890. There was a mass conversion during an 1893 religious revival and just when everyone saw the light and closed the saloons, the town's future was dimming.

They failed to get the railroad to pass through, then they got hit with a tornado in 1898.

The flagpole from Fort Elliott remains to this day, and the old stone jail is a museum.