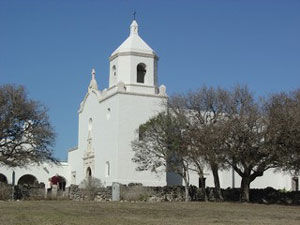 A wonderful opportunity to experience a blending of natural and cultural resources awaits visitors to Goliad State Park. Situated within three ecological zones and located on the San Antonio River, the park offers a variety of flora and fauna blending with tangible remains of Texas history and culture. The park serves as a hub for visiting the Mission Espíritu Santo State Historic Site (located in the park), the Presidio La Bahía, the Ignacio Zaragoza Birthplace State Historic Site, Fannin Battleground State Historic Site, the Goliad Historic District, and Mission Rosario State Historic Site. Surrounding ranches and oil fields remind visitors of the role the area played in the unfolding of Texas' history and economy. The park offers outstanding recreational activities and facilities.

Goliad State Park is 188.3 acres, located by Goliad in Goliad County. In 1931, acreage was accepted by the State Legislature from the City and County of Goliad and transferred to the State Parks Board in 1949.

The park, located on the San Antonio River, contains a refurnished replica of Mission Nuestra Senora del Espíritu Santo de Zuniga, reconstructed by the Civilian Conservation Corps (CCC) in the 1930s. The mission was originally established in 1722 near Matagorda Bay and moved to its present site in 1749. This mission was the first large cattle ranch in Texas, supplying its own needs and those of Spanish colonial settlements as far away as Louisiana. The park also contains General Ignacio Zaragoza's Birthplace, Plaza, and Amphitheater, which are located near Presidio La Bahia. General Zaragoza assumed command of the rag-tag Mexican Army and welded it into a staunch fighting force, which met and defeated the French on May 5, 1862, in the Battle of Puebla, which led to Mexico's independence from France. Park property also contains the ruins of Mission Nuestra Señora del Rosario, established in 1754, located four miles west of Goliad on US Highway 59.

Group School-Sponsored Trip entrance fees may be reduced.
Contact the Park to make arrangements and for pricing.

Special entrance rates may be available for: