(1812-1887) Randolph Barnes Marcy, United States Army officer and Western explorer, was born on April 9, 1812, in Greenwich, Massachusetts, the eldest son of Leban and Fanny (Howe) Marcy. On July 1, 1828, he entered the United States Military Academy at West Point, where he graduated twenty-ninth in the class of 1832. On July 1 he was brevetted a second lieutenant in the Fifth Infantry. In 1833 he married Mary A. Mann, the daughter of Gen. Jonas Mann of Syracuse, New York. The couple had three children. Marcy was promoted to the substantive rank of second lieutenant on November 25, 1835, to first lieutenant on June 22, 1837, and to captain on May 18, 1846. With the exception of two brief tours as a recruiting officer in the East, he spent this period on the northwest frontier in Michigan and Wisconsin. During the Mexican War he served with Gen. Zachary Taylor's army, which saw action at the battles of Palo Alto and Resaca de la Palma.q Again detached for recruiting duty, Marcy returned to Texas in 1847, and in 1849 he determined the route of the Marcy Trail, from Fort Smith to Santa Fe. In 1851 he commanded Gen. William G. Belknap's escort on the tour that selected the sites for forts on the Texas frontier. 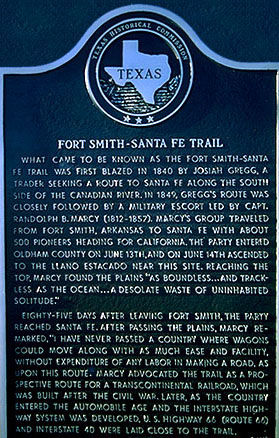 In March 1852 Marcy was assigned the command of a seventy-man exploring expedition across the Great Plains in search of the source of the Red River and directed to "collect and report everything that may be useful or interesting." Second in command of the Marcy expedition was Capt. George B. McClellan, who later became his son-in-law and during the Civil War his commander. Among Marcy's scouts was Jim Ned, a Delaware Indian whom Marcy called "the bravest warrior and the most successful horse thief in the West." Between May 2 and July 28, 1852, Marcy's party crossed a thousand miles of previously undocumented Texas and Oklahoma territory, discovering numerous valuable mineral deposits as well as twenty-five new species of mammals and ten of reptiles. Marcy also recorded a prairie dog town that covered 400,000 acres. He reportedly discovered the sources of both forks of the Red River, as well as the Palo Duro and Tule canyons, which he became the first white man to explore. The expedition encountered and documented the little-known Wichita Indians and compiled the first Wichita dictionary. It also returned with information on Cynthia Ann Parker. Eastern newspapers erroneously reported that Marcy died at the hands of the Comanches. Marcy's 1852 expedition has been called the most significant of his career and "the best organized, best conducted, and most successful" venture into the region to that date. It was the first to locate the headwaters of the Red River, which Zebulon M. Pike, Stephen Long, and Thomas Freeman had all previously searched for and failed to find. Marcy's report on his expedition, Exploration of the Red River of Louisiana, In the Year 1852. With Reports on the Natural History of the Country, supplemented by a handsome collection of lithographs, was published in 1853. It quickly became a classic of Western Americana.

In 1854 Marcy surveyed Indian reservations in northern and western Texas, and in 1856 he explored the headwaters of the Big Wichita and Brazos rivers. His report of the 1856 expedition was published by the United States Senate. In 1857 he served briefly against the Seminole Indians in Florida and accompanied Gen. Albert Sidney Johnston's expedition against the Mormons later that year. During that campaign he received national fame for a winter march of over a thousand miles to secure relief for Johnston's army, which was stranded without supples in the Utah mountains. After this adventure Marcy was recalled to Washington to prepare a semiofficial guidebook for the War Department. The result, The Prairie Traveler (1859), was an excellent compendium of such practical hints for travelers about what equipment to carry, methods of organizing a wagon train, and techniques of avoiding Indian attacks, as well as detailed notes on thirty-four of the most important overland trails. On August 22, 1859, Marcy was promoted to major and assigned as regimental paymaster.

With the outbreak of the Civil War, he was promoted to colonel and named inspector general of McClellan's Army of the Potomac. From September 23, 1861, through July 17, 1862, and again from September 13, 1862, through March 4, 1863, he served as acting brigadier general of volunteers. He was brevetted brigadier general in the regular army "for gallant and meritorious service in the field" and major general of volunteers on the same day, March 13, 1865, "for faithful and meritorious service during the war."

From 1863 through 1878, the year of his wife's death, Marcy served as inspector general of various departments of the army, and in 1871 he accompanied Gen. William T. Sherman on his fact-finding tour of the Texas frontier. On December 12, 1878, he was promoted to the regular rank of brigadier general and was named inspector general of the army. General Marcy also prepared two volumes of reminiscences, Thirty Years of Army Life on the Border (1866) and Border Reminiscences (1872), which contain much Texas material. He retired from the army on January 2, 1881, and died on November 22, 1887, at his home in West Orange, New Jersey.

The information above is from the Handbook of Texas Online.