Approximately three miles from Millsap, about noon, and just after a shower, in 1868, Webb Gilbert turned out his horses to graze. At the time, sixteen Indians were concealed on a red bluff not a great distance away, and in a short time rounded up the horses. Indian signs were soon discovered, however, and Johnce Gilbert and Amos Ashley, discovered the horses were gone. Word was conveyed to neighbors, who came over to the Littlefield Bend. In a short time, M.Y. (Roe) Littlefield, Webb Gilbert, Johnce Gilbert, Geo. Emberlin, Carroll Mabry, Tom Lane, James Littlefield, Amos Ashley, and, perhaps, one or two others were soon in hot pursuit of the savages. When the Indians were crowded, they began to throw off blankets and other loose luggage that could be spared. The Indians were pursued until overtaken about three or four miles further. Here a running fight followed. In a short time the Indians made a stand, fired a few shots, dropped their stolen horses, and then made a retreat toward the mountains, and occasionally continued to drop blankets and other baggage. When the Indians were about three miles north of Millsap, they were again closely crowded and a running fight followed with the Indians still in the lead. One by one the fleeing Indians were shot from their horses, and finally M.Y. (Roe) Littlefield received a serious wound. 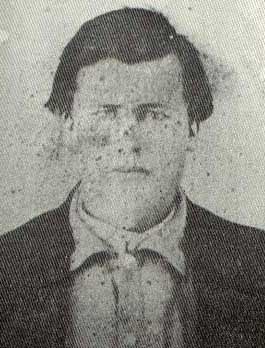 When the fight was over, the citizens took the back trail to scalp the fallen Indians. Only about two scalps, however, were recovered. One or two other Indians who had been wounded, were gone. M.Y. (Roe) Littlefield recovered, but approximately eighteen years later his death was largely attributed to his old wound received in this fight.

Note: Author personally interviewed Dave and F.S. Littlefield, James and Sam Newberry, R. Bradford, Henry Blue, and others who lived in Palo Pinto and Parker Counties at the time.

In the running fight mentioned by McConnell, the following story is from the book, A Cry Unheard, by Doyle Marshall:

Twenty-five-year-old Monroe Littlefield rode in advance of the other settlers, firing at the band. After the raiders had passed the Millsaps double log cabin and were east of the home of a widow living about one-quarter mile north of the Millsaps place, the fleeing band began to split an age-old maneuver commonly employed by the Indians to confuse their pursuers. As one of the Indians turned his horse off the trail to the right and up a steep hill, Roe Littlefield followed. When he saw another Indian aim a six-shooter at him and, at the same time, found that his own pistol was empty, Littlefield quickly reversed his direction, reduced the target by lowering himself close to his horse's body, and spurred his steed in an attempt to escape the field of battle. However, a well-aimed shot from the Indian's gun struck Littlefield in the back at the point of the shoulder blade. This ended the fight at a location just northeast of the widow's cabin. Seriously injured, Littlefield was carefully moved to the nearby Millsaps home, where Fayette Ikard attempted to relieve the pain by applying wet cloths to the wound until the Weatherford doctor removed the ball from must above the collarbone. The doctor "sterilized" the wound by pushing a pure silk handkerchief through it. In spite of the seriousness of the injury, the crude operating procedures, and the absence of sanitary precautions against infection, Littlefield survived. The hospitable Millsaps family cared for Littlefield in their home for about six weeks, when the patient partially recovered enough to make the trip home to Littlefield Bend. Littlefield's neighbors did his farm chores during his extended convalescence.

...Some of the boys of the settlement found the two scalped Indian bodies, tied them to their horses' tails, and dragged them to Millsaps' home for viewing. One of the boys, Sam Newberry, from the Newberry Community, east of the Millsaps place, told that the Indians were so tough that dragging them over rocks and brush did nothing to their skin. It soon became necessary to dispose of the bodies. In order to avoid any appearance of honoring the enemy with a burial-the remains were removed to the widow's home north of the Millsaps place and were thrown to her ravenous hogs.

Because the North Texas settlers had seen the scalped and mutilated bodies of their friends and family members, viewing the scalps or bodies of the savage victims seemed to satisfy the settlers' curiosity and craving for vengeance. In addition to the public showing of the bodies at the Millsaps home, there were at least two other instances of such local public displays. In much the same sense that glory was conferred upon a savage by his people by means of a scalp dance, when he proudly displayed the scalp of a white settlers, the frontiersman who could prove his valor by taking an Indian's scalp, or if possible, the victim's body, achieved instant fame and honor from settlers all along the Texas frontier.

During the heat of the Indian forays in and around Parker County a party of frontier volunteers originating in Palo Pinto County scouted the countryside in search of depredating bands which continued to ravage the farms and ranches of the outlying settlers. Because they were seldom successful in trailing the marauders, the volunteers, on one occasion, were elated at their unusual success in dispatching one of the enemy. The victim's body was brought to an abandoned house near the village of Palo Pinto, where it was viewed by the impassioned settlers throughout the area. Also proudly displayed by the victors were the victim's scalp, bow, arrows, and feather headdress taken in the battle.

On a spring day in 1863, the alarm was given in the north Parker County communities of Erwin and Goshen that Indians were in the area. Several families gathered at the home of "Uncle' Steve Erwin. The men gathered their horses, turned them into a green wheat field, and selected a detail to guard them through the night. While the women and children spent the night in the house, the guards stood watch over the horses. As it began to rain some time after midnight, two of the guards, Steve Erwin and Henry Roberts, went to the house for protective clothing. Sam Stennett and Jack Fidler remained on guard in the fence corner. When Erwin and Roberts left, two Indians, unaware that the two guards remained on duty, quietly laid down the rail fence and began to round up the horses. Limited with only single-shot cap-and-ball weapons, the remaining two guards killed one of the Indians; the surviving Indian disappeared into the adjacent woods. The guards tied one end of a rope to the saddle horn and the other end around the victim's neck-then dragged the body to the house. On the following morning settlers came from miles around to view the spectacle while the scalp was still in place. "Uncle" Steve Erwin was selected to "lift" the scalp, and he proved capable of performing the task. After the excitement diminished, a log-chain was hitched around the Indian's neck, and the body was dragged by a team of oxen and rolled into a ravine about a mile away. Later, some of the youngsters of the settlement went to the ravine, took strips of skin from the victim's back, and used them for shoelaces. Sometime later, after the body decomposed, the Indian's arm and leg bones were used for making gun stocks and file handles. One unusually imaginative settler put a bail on the inverted skull and used it as a bucket for carrying fish bait.