While preparing and gathering the data for the present work, the author exerted every atom of energy to present each story as accurately as possible. In doing so, he used a checking system for the purpose of eliminating some differences, that necessarily arise from those interviewed, and did so in this case.

For it is sometimes surprising to see and hear the number of surviving old settlers who seem to think their own versions of the early history of the frontier are correct, and others wrong.

Alf Lane had been a member of Company G of the Frontier Regiment. This company was stationed at Fort Belknap, and was commanded by Capt. Newt. White. Some of his comrades in the above company, who still alive, are and were under the impression that Alf was going home from Fort Belknap on a furlough, at the time he was assaulted by Indians. But Martin Lane, a son, and several other early frontiersmen, contended he was not going home from Belknap, on a furlough, but had been helping Charles Goodnight, his brother-in-law, move a herd of cattle to Elm Creek, near the line of Young and Throckmorton Counties. Alf Lane, however, only went as far as old Fort Belknap. After hearing the evidence of both sides, the author became thoroughly satisfied that Martin Lane, and those who held his view, were correct. We did not stop there. The matter was presented to Chas. Goodnight himself, a brother-in-law of Alf Lane, and we have his written statement, corroborating the contentions of Martin Lane and others.

Alf Lane, a brother of James Lane who was mortally wounded in the Wolf Creek Fight, moved to Palo Pinto County in 1855. He settled near Keechi, about two miles southwest of Black Springs, and numbered among the very early settlers of that section. He later moved to the Salt Hill community, in Jack County. During the War, cowhands were exceedingly hard to get, so Alf Lane voluntarily assisted Chas. Goodnight, his brother-in-law, to move cattle being moved to the territory bordering on Elm Creek, near the Young and Throckmorton County line. Concerning the movement of these cattle, Col. Chas. Goodnight said:

"The War had hemmed our cattle in, until our herds on the Keechi, in Palo Alto and Jack County were suffering for grass. I was moving my third herd, about 100 head, to the Upper Elm. Being war time, help was almost impossible to get. Mr. Lane, knowing this, and that I was scarce-handed, overtook me just before we got to Rock Creek, going west, saying he would help me through. When we got to Fort Belknap, we camped for the night, just west of the town. Alf Lane went to stay all night with old friends, the Mills, who used to live in the Keechi Valley, in Palo Pinto County. That night the Indians came in and stole all of the horses, excepting those that we had on guard. When daylight came, and we discovered that our horses were gone, I went over to Mill's home, and told my brother-in-law to wait a day until I got the herd to the ranch, and I would go home with him. He said it was not necessary and he would go back that day."

Alf Lane took breakfast that morning with Uncle Dinney Murphey, at Old Murphey Station. After breakfast, he started on toward his home, and went down the old Fort Belknap and Ft. Worth military road. Mr. Lane, no doubt, felt secure, for he was riding an exceptionally good horse. This was the morning of July 15, 1864.

During the preceding night, Alf Lane had dreamed the Indians massacred some of his own people, so he drove rapidly on his fleet horse named "Driver." It was, no doubt, due to this dream that this frontiersman turned back at Belknap. If so, it ensnared him into his own grave. For when he reached the Cement Mountain, about eleven miles east of old Fort Belknap. Alf Lane was ambushed and killed by Indians. He wrapped his bridle reins around the horn of his saddle, ran five or six hundred yards, and fell from his horse, which was later found by the mail carrier. W.J. Wilson delivered this horse, and the sad news to Mrs. Lane and her children. A searching party soon found Mr. Lane where he fell, and where he was temporarily buried. But Alf Lane was later removed to the Thurman Graveyard about two miles west of old Black Springs. 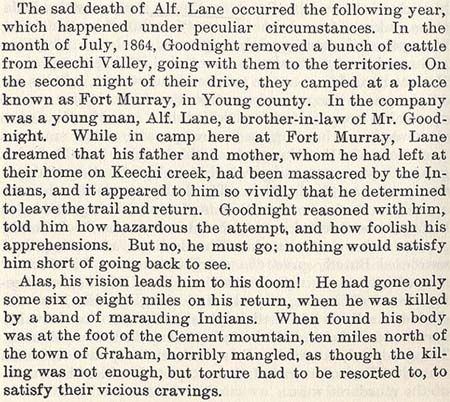