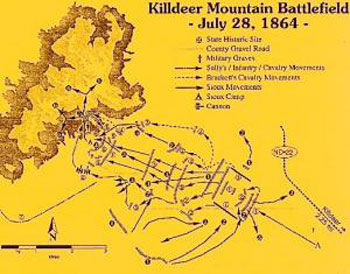 U.S. Major General John Pope's 1864 campaign against the Lakota (Sioux) was a response to the demands for protection by travelers to gold mines in the northern Rockies and by settlers claiming land as a result of the Homestead Act.

The Lakotas resisted the invasion of their lands with raids and killings that heightened the whites' fear of them. Pope sent U.S. Brigadier General Alfred Sully with 1,800 men from Nebraska and Iowa volunteer regiments to establish forts to protect the emigrants' northern overland routes and the Missouri River route. After three Lakotas killed the brigade's topographical engineer, the cavalry killed them. Sully ordered their heads hoisted on poles as a warning, but his action increased the Lakotas' resolve to oppose the army.

In July Sully established Fort Rice above the mouth of the Cannonball River, then moved up the Heart River, escorting a wagon train of emigrants to the Yellowstone River in Montana Territory. He left the emigrants with a strong guard and rode in 110-degree heat toward the Killdeer Mountains with 2,200 soldiers, including 1,500 from Minnesota volunteer regiments, to attack a large Lakota camp. There were about 1,600 warriors, including Tetons (Hunkpapa, Sans Arc, Blackfeet, and Miniconjou), as well as Yanktonais and Santee Dakota from eastern Dakota Territory and Minnesota. One of the Tetons was Sitting Bull.

Sully formed his troops into a mile-long square, with their horses, wagons, and artillery in the center and skirmishers out in front. As they advanced, there were charges and feints by both sides until artillery fire and a charge by the Minnesota cavalry forced the Lakotas into the woods and ravines, where the soldiers shelled them. The Lakotas had to abandon their camp, and Sully captured their food stores, including about 400,000 pounds of dried buffalo meat and berries. The cavalry broke off their pursuit the next morning when the Lakotas found refuge in the Badlands of the Little Missouri River.

Sully's force escorted the emigrants through the Dakota Badlands-where they were harassed by the survivors of the Killdeer battle, reminders that the Lakotas were not defeated.