Marker Title: Big Inch Pipeline
City: Longview
County: Gregg
Year Marker Erected: 1990
Marker Location: Martin Luther King at Pittman St.
Marker Text: Before the United States entry into World War II following the bombing of Pearl Harbor in December 1941, ninety-five percent of the crude oil delivered to East Coast refineries was transported by tanker ships. Ninety percent of that oil originated from Texas oil fields. Beginning in February 1942, many U.S. oil tankers en route from the Gulf of Mexico to the East Coast were sunk by German submarines. Recognizing the need to transport oil under safer circumstances, Secretary of the Interior Harold Ickes developed a plan for massive overland oil pipeline. Under the auspices of the War Emergency Pipelines, Inc., construction began on the largest pipeline in history up to that time. Measuring twenty-four inches in diameter, the Big Inch pipeline extended from Longview to Norris City, Illinois, and eventually to refineries in the East. The Big Inch pipeline's impact on the war effort was tremendous, enabling the safe and timely transport of oil products vital to the Allies. During the height of wartime service, over 300,000 barrels of oil were delivered each day over the 1,476-mile line. When the war ended, the Big Inch continued in service after conversion to a natural gas pipeline.

Marker Title: Lou Della Crim Home
Address: 201 N. Longview St.
City: Kilgore
County: Gregg
Year Marker Erected: 1981
Marker Text: This bungalow style residence was constructed in 1920 for Lou Della (Thompson) Crim (b. 1868), on the former site of the Hearne Hotel. The farm she owned at Laird Hill (4 mi. S) was part of an oil exploration project headed by her son Malcolm, later the first Kilgore mayor, and local financier Ed Bateman. Her property gained national attention on Dec. 28, 1930, when the Bateman-Crim Wildcat Well No. 1, the discovery well for this area of the significant East Texas oil field, blew in there. Area Rangers, including the celebrated Capt. M.T. (Lone Wolf) Gonzaullas, were housed here.

Marker Title: Dean-Keener-Crim House
Address: 101 E. Lantrip St.
City: Kilgore
County: Gregg
Year Marker Erected: 1975
Designations: Recorded Texas Historic Landmark |
Marker Text: The one-story east wing of this house, considered the oldest still standing in Kilgore, was built by S.G. Dean about 1876. After buying the structure in 1881, L.J. Keener (1840-88) attached the two-story west wing. Wiley N. Crim (1865-1937) a cotton ginner and grocer, added porches and enclosed the well when he purchased the house in 1902. His family still owns and occupies it. Oil was discovered on this and nearby Crim property during the boom of the 1930s. Recorded Texas Historic Landmark - 1975

Marker Title: World's Richest Acre
Address: Main and Commerce
City: Kilgore
County: Gregg
Year Marker Erected: 1966
Marker Text: Part of fabulous East Texas oil field discovered in 1930. This 1.195-acre tract had first production on June 17, 1937, when the Mrs. Bess Johnson-Adams & Hale No. 1 well was brought in. Developed before well-spacing rules, this block is the most densely drilled tract in the world, with 24 wells on 10 lots owned by six different operators. This acre has produced over two and a half million barrels of crude oil; selling at $1.10 to $3.25 a barrel, it has brought more than five and a half million dollars. A forest of steel derricks for many years stood over the more than 1,000 wells in downtown Kilgore, marking the greatest concentration of oil wells in the history of the world. Dozens of these derricks still dot city's internationally famous skyline. Since 1930, the East Texas oil field has produced nearly four billion barrels of oil. It now has more than 17,000 producing wells, and geologists predict a future of at least 45 years for this "granddaddy of oil fields." Its development has attracted to the area many diversified industries and a progressive citizenship with a high degree of civic pride. 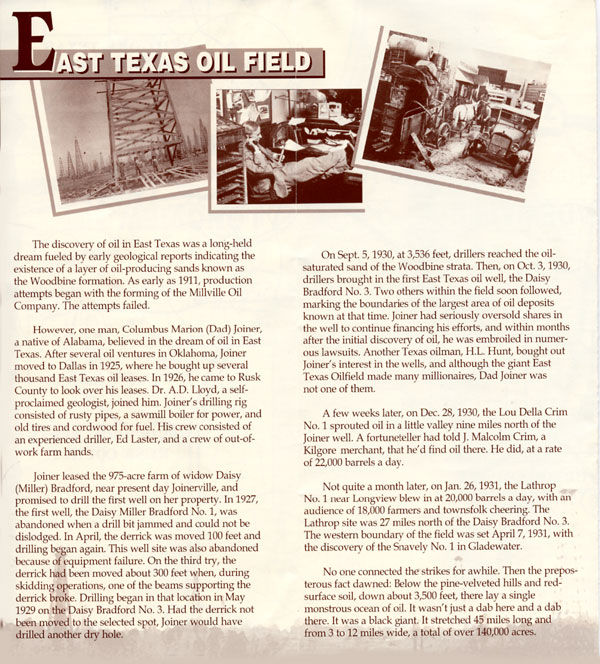 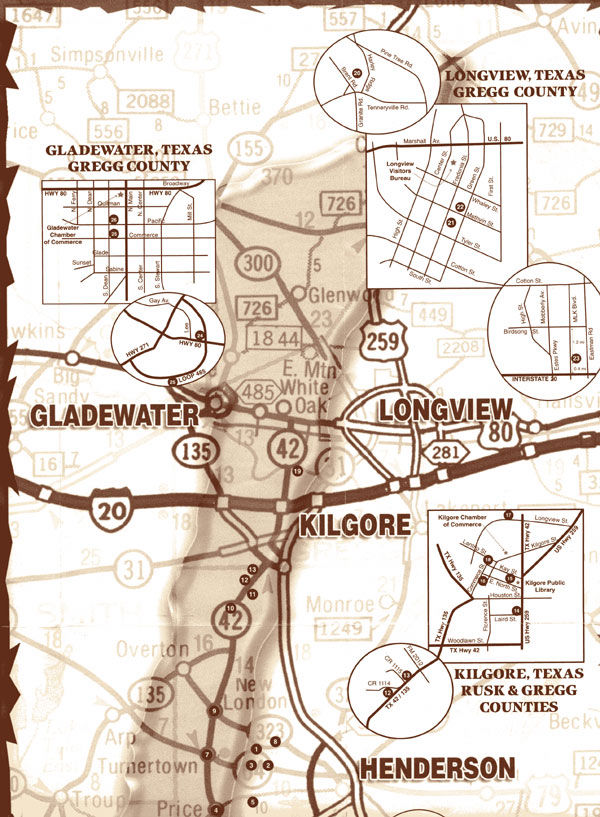 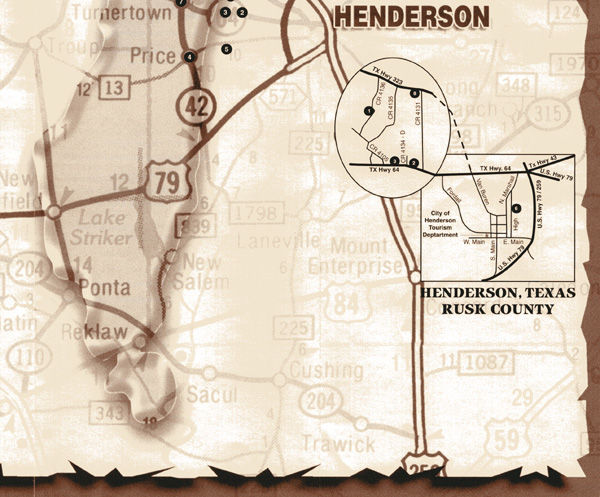 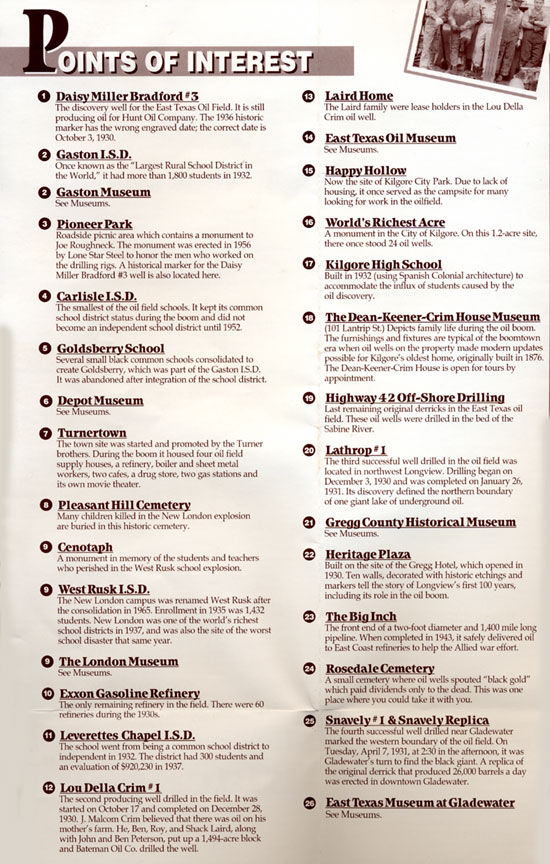 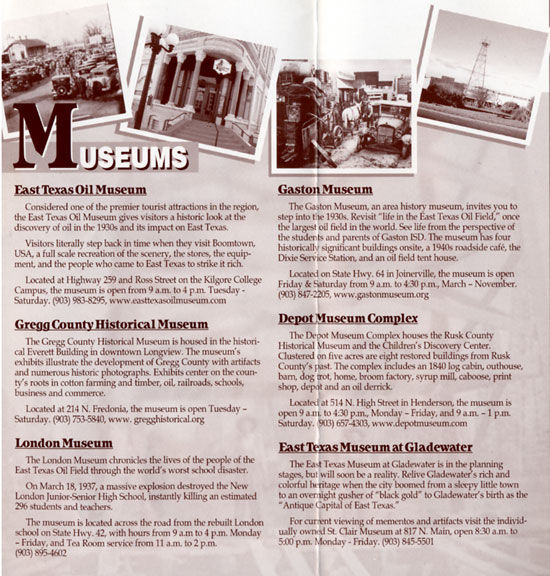 It was brought to our attention and confirmed that the New London School Explosion was on March 18, 1937 not the 19th as mentioned above.