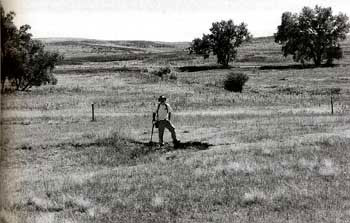 It was after dark when Kidder reached Custer's campsite at the forks. He found it abandoned. Unbeknownst to Fort Sedgwick, Custer had left the area and marched to the Platte River. In the moonlight, Kidder mistook the trail of the train Custer had sent to Fort Wallace for Custer's own trail. Kidder left, on the wrong road.

About midday on 2 July, 1867, a group of Lakotas discovered Kidder's party north of Beaver Creek. The warriors alerted 12 nearby Cheyennes, including the Dog Soldier Tobacco. At the Indians' approach, Kidder and his men veered off to the southeast, making for the valley of Beaver Creek, 12 miles north of present-day Edson, Kansas. Some of Kidder's men were shot down on a ridge above the creek, but the rest of them made it to a small gully 50 yards north of the creek. The Lakotas dismounted and crept up on foot while the Cheyennes circled around, shooting. Kidder's men fired from the gully, shooting Tobacco's and Good Bear's horses out from beneath them.

Hopelessly outnumbered, Kidder and his ten men were killed and mutilated, some of them tortured and burned. Red Bead was cut down with the soldiers. Two Lakotas were killed, among them the young chief Yellow Horse.