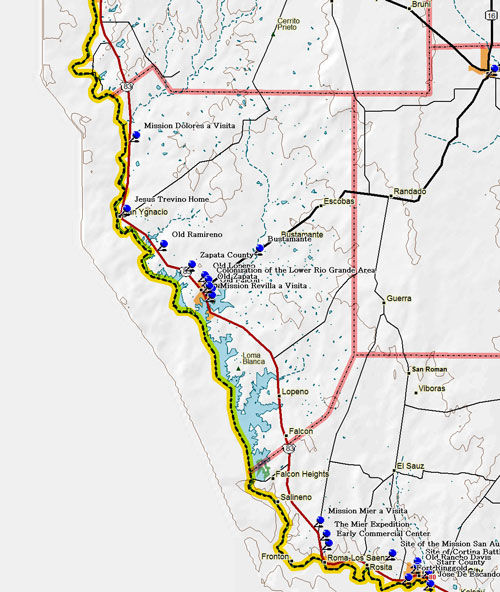 Marker Title: Bustamante (Rancho Las Comitas)
Address: SH 16, NE of Zapata
City: Zapata
County: Zapata
Year Marker Erected: 1991
Marker Location: From Zapata, take SH 16 NE about 12 miles.
Marker Text: The unincorporated village of Bustamante, settled by Don Pedro Jose Bustamante and his family in 1822, is located on a 22,142-acre land grant awarded by the Mexican government to Bustamante in 1835. He brought other settlers, horses, cattle, sheep, and goats to help open up the frontier. An early sandstone blockhouse built by the Bustamante family provided protection from Indian raids. During the 1870s the village became the headquarters of Rancho Las Comitas, named for the Comita tree which grew on the property. Las Comitas gave rise to a community of homes, a school and a store, making the ranch almost self-sufficient. Part of the land later was claimed by the State of Texas in a Supreme Court case. Numerous Bustamante family members are buried in three ranch cemeteries: the Bustamante Cemetery, the Cameron Cemetery, and the Gracia Cemetery. The community was officially named Bustamante in 1926 when a post office was established with Herlinda Bustamante as postmistress. Ranch life changed in the 1930s with the discovery of oil and gas in the area. Although much of the land was leased for exploration wells, the ranch is still in operation under the direction of Bustamante descendants.

Marker Title: Colonization of the Lower Rio Grande Area
Address: 7th Ave
City: Zapata
County: Zapata
Year Marker Erected: 1986
Marker Location: Courthouse grounds, 7th Avenue in front of courthouse, Zapata.
Marker Text: In 1746, Jose de Escandon was selected by Spanish officials to be chief colonizer for the lower Rio Grande Valley, then a part of Mexico's northern frontier. A native of Spain, Escandon (b. 1700) had proven himself a capable administrator and military leader as part of the Spanish forces in Mexico. Escandon took over 700 people, including missionaries, soldiers, and Indians, on his initial exploration of the area. His findings from this venture allowed him to complete his colonization plans. By 1748, thirteen settlements had begun in the area, which came to be called Nuevo Santander after Escandon's home province. A total of nineteen settlements, including Laredo, San Ygnacio, Falcon, and Lopeno, owe their foundings to Escandon. Escandon issued royal land grants in tracts known as "porciones," and in return the settlers were to fulfill certain requirements. The final inspection of the land grants, known as the General Visitation of 1767, marked the beginning of private and individual land ownership in this part of the state, as valid applicants were given possession of their "porciones." The colonization efforts also resulted in the farming and ranching settlements from which grew the immense cattle industry of South Texas.

Marker Title: Mission Dolores a Visita
Address: US 83, N of San Ygnacio
City: San Ygnacio
County: Zapata
Year Marker Erected: 1936
Marker Location: From San Ygnacio, take US 83 north about 11 miles. Site is just north of Dolores Arroyo.
Marker Text: In the vicinity of this site was Mission Dolores a Visita; established in 1750 as a part of Jose de Escandon's project to settle the region and civilize and Christianize the Indians.

Marker Title: Old Falcon
Address: US 83
City: Falcon
County: Zapata
Year Marker Erected: 1983
Marker Location: US 83, R.O.W., Falcon.
Marker Text: In 1746, Col. Jose de Escandon was commissioned by the Viceroy of New Spain to lead the colonization of this area. The first settlers arrived 3 years later and were assigned land on which to build their homes. A survey conducted in 1767 resulted in the allocation of individual land grants to the settlers, which marked the start of private property ownership in the area. About 1800, Jose Eugenio Ramirez established a ranch on the north bank of the Rio Grande and named his headquarters Ramireno. The settlement that grew up around his home was plagued throughout the 19th century with Indian raids, particularly when military protection was withdrawn during the years of the Mexican Revolution (1810-1821). In the early 1900s, Ildefonso Ramirez opened a general store, and, when a post office was established in 1915, the name of the village was changed to Falcon in honor of Jose Eugenio's wife, Maria Rita de la Garza Falcon. After Falcon Dam was completed in 1952, the town was flooded, and residents were forced to relocate to this site. The history of Old Falcon, however, with its ties to 18th-century Spanish colonialism, remains an important part of their heritage.

Marker Title: Old Lopeno
Address: US 83
City: Lopeno
County: Zapata
Year Marker Erected: 1984
Marker Location: US 83 R.O.W., Lopeno.
Marker Text: Development of this area began about 1749 when Col. Jose de Escandon began bringing colonists to establish permanent settlements along Mexico's northern frontier. When parcels of land were granted to the colonists by the Spanish government in 1767, Ysabel Maria Sanchez, widow of early settler and rancher Joseph Lopez, was allotted more than 6,000 acres. The village of Lopeno that later developed on part of the land was named in honor of the Lopez family. During the early 1800s, part of the Lopez land passed to the ownership of the Ramirez family, founders of the nearby village of Falcon. In 1821 Benito Ramirez built a combination home, fort, and chapel that later came to be called Fort Lopeno. Federal troops briefly occupied the fort during 1856 while in the area helping to ease border disturbances. The general store established in Lopeno in the early 1900s by Serafin Benavides served as the area's only supply point at the time. A post office was established in 1920, and in 1934 oil and gas wells were successfully drilled just outside the village. When Falcon Reservoir was created in 1952, residents relocated their village to this site.

Marker Title: Old Ramireno
Address: US 83, Se of San Ygnacio
City: San Ygnacio
County: Zapata
Year Marker Erected: 1988
Marker Location: From San Ygnacio, take US 83 SE about 5 miles.
Marker Text: Old Ramireno was located on land granted to Don Jose Luis Ramirez by the King of Spain in 1784. Part of the colonization effort of Col. Jose de Escandon, Ramirez' grant was designated as Porcion 5. A resident of Revilla (now Guerrero), Nuevo Santander (now Tamaulipas) in Mexico, Don Jose Luis Ramirez, his wife Maria Bacilia Martinez, and their children moved across the Rio Grande and established a home on their land in present Zapata County. Don Jose Luis and Maria Bacilia Martinez had ten children. Their families and descendants formed the nucleus of the community of Ramireno. The men of the ill-fated Mier Expedition of 1842 camped at Ramireno during their march to Mexico, and the settlement was also the site of United States military activity during the Mexican Revolution and border raids of 1916-17. The construction of Falcon Reservoir on the Rio Grande caused the relocation of several area communities, including Ramireno. The settlement founded by Don Jose Luis Ramirez was moved in 1953 to a site two miles from the original Ramirez Ranch. The hand-cut sandstone Ramirez ranch home was covered by the waters of Falcon Reservoir.

Marker Title: Old Zapata
Address: US 83, Courthouse Grounds
City: Zapata
County: Zapata
Year Marker Erected: 1979
Marker Location: Courthouse, US 83, Zapata.
Marker Text: In 1770 residents of Revilla, Mexico, established a village (4.5 mi. W) on land granted by Jose de Escandon. The same year the Spanish built a fort nearby. In 1842 the men on the ill-fated expedition to Mier occupied the village while they foraged for supplies. First named "Habitacion," the town grew to be second largest on the Rio Grande. It was named for friendly Indians living in "carrizo" (cane) huts. In 1858, after Zapata County was created, the name changed to "Bellville" and then back to "Carrizo." In 1898 "Zapata" was chosen for Col. Antonio Zapata, a rancher executed for his part in the 1839 fight to found the Republic of the Rio Grande. Henry Redmond, a well-known area rancher, was the first county judge. Another county judge was Jose Antonio George Navarro, son of Jose Antonio Navarro, one of the two native-born signers of the Texas Declaration of Independence. The elimination of duty free trade along the border in 1903 caused an economic decline. With the coming of irrigation, a rich agricultural area developed. After the construction of Falcon Dam and the flooding of Old Zapata by lake water, the county seat was relocated at this site on land originally granted to Bartolome Cuellar and Jacinto de Cuellar.

Marker Title: Site of Uribeño.
City: Zapata vicinity
County: Zapata
Year Marker Erected: 2001
Marker Location: 4 miles north of Zapata on US 83 right-of-way
Marker Text: One of five Zapata County settlements inundated by the waters of Falcon Reservoir in the 1950s, Uribeño traces its origin to 1803, when Porción 41 was granted to José Nicolás Clemente Gutiérrez de Lara (1770-1805) for his service in the Spanish army. As required by the terms of the grant, José Nicolás Clemente worked to establish a ranch on his property against the odds of Indian raids, scorching heat, drought and periodic river flooding. He returned to his hometown of Revilla in Mexico just prior to his death, leaving behind his widow, María Josefa Martínez, and six children. Development of the ranch on Porción 41 was delayed until after Mexico won its independence from Spain in 1821. After the war, some of José Nicolás Clemente's sons returned to the ranch; by 1826 all of his children had married and moved to the ranch, which was named Uribeño. By 1860, the population of the Uribeño community, which took its name from the Gutiérrez ranch, was 152. Located about two miles west of this site, it was a small, poor community, comprised primarily of farmers, herdsmen and laborers. Although no permanent church existed, visiting priests periodically held worship services. A cemetery, a schoolhouse and a small grocery store existed to serve the residents. When the United States government built Falcon Dam, Uribeño met the same fate as its neighboring towns, but its residents chose not to move the community to another site before the waters flooded the town. Only the cemetery was relocated to serve as a physical reminder of this early border community. (2001)