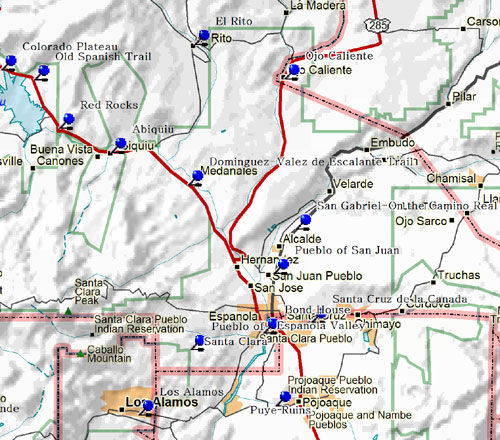 Established on the site of an abandoned Indian pueblo, Abiquiu in the mid-18 th century became a settlement of Spaniards and genizaros (Hispanicized Indians). In 1776, explorers Fray Francisco Atanacio Dominguez and Fray Silvestre Velez de Escalante visited here. In 1830, the settlement became one of the stops on the Spanish Trail which linked Santa Fe with Los Angeles, California.

Frank Bond (1863-1945), prominent Espanola merchant, came from Canada in 1882. In 1887 Bond married May Anna Caffal of Pueblo, Colorado and built their home. The house grew from a two-room adobe to this large structure. Acquired by the city in 1957, the building is used as a museum today.

From this point, the Colorado Plateau extends across northwestern New Mexico into northeastern Arizona, southeastern Utah, and southwestern Colorado. A colorful landscape of mesas, and canyons, it is underlain by natural mineral, oil, and gas resources locked within sedimentary strata deposited millions of year ago.

In order to open a trail between Santa Fe and Monterey, California, and to spread Christianity among the Indians, Fray Francisco Atanasio Dominguez and Fray Silvertre Velez de Escalante led a small party northwest in 1776. Abiquiu was the last Spanish settlement they saw in their five-month 2000-mile journey.

This village was settled in the 1830s by residents from the Abiquiu area. This Territorial Legislature of 1909 established the Spanish-American Normal School here to train teachers for northern New Mexico schools. After several changes in name and purpose, the institution is now the Northern New Mexico Community College.

When it was described by Gaspas Castano de Sosa in 1591, the Espanola Valley contained about ten Tewa-speaking pueblos, several of which are still occupied today. Juan de Onate established New Mexico's first colony here in 1598. Long on the northern frontier of Spanish settlement, the Valley has continuously reflected its Indian and Spanish heritage.

Located near the ancient Indian sites of the Pajarito Plateau, Los Alamos is one of New Mexico's newest towns. In 1942 a boys' ranch school became the headquarters of the Manhattan Project, which led to the development of the atomic bomb. Los Alamos National Laboratories continues to be a center for nuclear and other scientific research.

Ojo Caliente ("hot spring" in Spanish) was a strategic point for the defense of the Chama and upper Rio Grande Valleys. Colonization began in the early 18th century, but pressure from the Utes and Comanches delayed permanent settlement until 1793. In 1807, Lt. Zebulon Pike reported a population of 500.

In 1829-30, Antonio Armijo traveled from Abiquiu to California to trade for mules, thus extending the Old Spanish Trail and opening it to trade between Santa Fe and Los Angeles. His route turned west, near present-day Abiquiu Dam, to Largo Canyon, which led him to the San Juan River.

This spectacular site on the Parjaito Plateau is located in the reservation of Santa Clara Pueblo. It includes a pueblo on the mesa top and rooms cut from the volcanic rock. Puye, occupied from about 1250 to 1550, is considered the ancestral home of Santa Clara and other Tewa-speaking pueblos.

The first church in New Mexico was dedicated here in 1598 when Juan de Onate used the pueblo as his headquarters. Pope, leader of the Pueblo Revolt of 1680, was from San Juan. The unusual Gothic-style church was built in 1912-13 by Father Camilo Seux, a French priest.

Founded around the fourteenth century, Santa Clara traces its ancestry to Puye, an abandoned site of cave dwellings on the Pajarito Plateau. Increasing tensions with the Spanish led to its participation in the Pueblo Revolt of 1680. The mission church, once thought to be the narrowest of its kind, has been reconstructed several times since the 17th century.

Governor Juan de Onate set up his headquarters in San Juan Pueblo in 1598, but by 1601 he had moved the Spanish capital across the Rio Grande to Yuque-Yunque Pueblo. Named San Gabriel, it served as the seat of government until 1610, when Onate's successor founded a new capital at Santa Fe.

In 1695, Governor Diego de Vargas founded his first town, Santa Cruz de la Canada, designed to protect the Spanish frontier north of Santa Fe.   The church which still stands, was constructed in the 1730s. In 1837, residents revolted against Mexican authorities, resulting in the death of Governor Albino Perez.