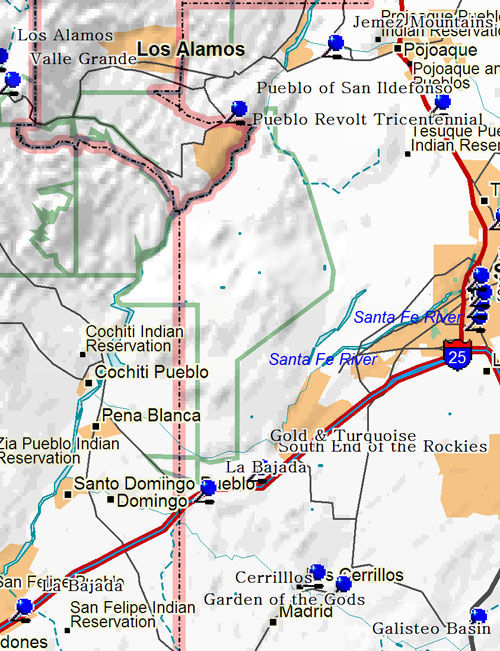 Before the arrival of the Spanish, the mineral-rich area around Cerrillos produced turquoise which was traded as far as the Valley of Mexico. An early settlement of Los Cerrillos harbored Spanish refugees from the 1680 Revolt, but the present community was not founded until the lead strike of 1879.

Garden of the Gods

Vertical beds of colorful sandstone and mudstone of the Galisteo Formation were deposited in streams 70 million years ago. Deposited as horizontal sheets, they have been tilted to their present vertical position by mountain building forces beneath the earth's surface.

Spanish explorers found several Tano-speaking pueblos in the Galisteo Basin in 1540. They were among the leaders of the Pueblo Revolt of 1680. 150 Tano families were eventually resettled in Galisteo Pueblo in 1706. Droughts, famine, Comanche raids, and disease led to its abandonment by 1788, with most of the survivors moving to Santo Dominto.

First gold placer mining west of the Mississippi began with the discovery of the precious metal in the rugged Ortiz Mountains south of here in 1828, 21 years before the California gold rush. Since then, the district has produced more than 99,000 ounces of placer gold. Gold is currently produced from lode deposits.

The prominent hills to the east and to the left are the Cerrillos Hills, site of ancient turquoise mines worked by the Indians centuries before the arrival of the Spanish. The Cerrillos ("little hills") are regarded as the oldest mining district in the United States, and New Mexico is a major turquoise producer.

On the skyline to the west are the Jemez Mountains where tremendous volcanic eruptions a million years ago created a huge caldera some 15 miles in diameter that now forms beautiful Valle Grande set amid a ring of volcanic peaks. Geothermal energy has been tapped from hot rock beneath the mountains.

Flow and ash-fall deposits surrounding the volcanic range form the Pajarito Plateau, site of numerous, ancient cliff dwellings and the atomic city of Los Alamos. The Jemez Mountains are part of the Southern Rockies and form one of the western ranges of the Rockies in New Mexico.

La Bajada, or "the descent," marks the division between the Rio Arriba, or "upper river," and the Rio Abajo, or "lower river," sections of New Mexico. This steep and dangerous grad was long an obstacle to caravan traffic going from the Rio Grande Valle to Santa Fe.

La Bajada Hill is a major break in topography situated along a geological fault zone that separates the downfaulted Rio Grande rift from the Santa Fe Plateau. The red formation tilted at various angles along the fault zone is the Galisteo Formation deposited in streams about 70 million years ago.

More recent volcanic lavas form the resistant caprock of the plateau above. Landslide deposits are prominent on the slopes below the lava cap. Total relief from the rim of the Santa Fe Plateau to Galisteo Creek at the foot of La Bajada is about 800 feet.

In the 1500s, migrants from the Pajarito Plateau joined their Tewa-speaking relatives at San Ildefonso. The pueblo is famous as the home of the late Maria Martinez and the other makers of polished black pottery. The modern church, a replica of that of 1711, was finished in 1968.

The Tewa pueblos of San Juan, San Ildefonso, Santa Clara, Pojoaque, Nambe and Tesuque were responsible for directing the 1680 Pueblo Revolt after the Spaniards captured two Indian runners at Tesuque on August 9. Joined by Taos and Picuris they formed into two divisions and on August 15 laid siege to Santa Fe.

South End of the Rockies

Divided by the Rio Grande, the volcanic Jemez Mountains are the western New Mexico Rockies, the Sangre de Cristo ("blood of Christ") Mountains are the eastern chain. Ice Age glaciers carved their summits including Santa Fe Baldy, the prominent peak in the Santa Fe Range which rises to 12,622 feet above sea level.