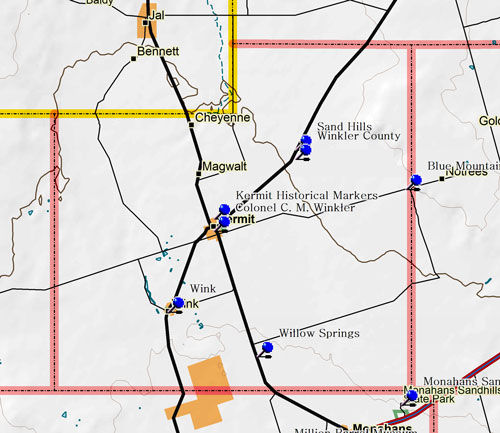 Marker Title: Blue Mountain
Address: SH 302, East of Kermit
City: Kermit
County: Winkler
Year Marker Erected: 1964
Marker Location: From Kermit, take SH 302 East about 17 miles.
Marker Text: Winkler County's highest point (3500 Ft.), Blue Mountain has long served as a lookout and landmark on the west Texas plains. Here Indians found fuel, sheltering caves, and water. They left artifacts in the caves and pictographs on the cave walls that boasted their prowess as horse wranglers, hunters, and fishermen. A directional sign told of a water hole nine days by trail to the northeast. Pictographs also told the story of a fight between two lizards. The pass is called Avary Gap for John Avary, who first settled the area in 1880. (1964)