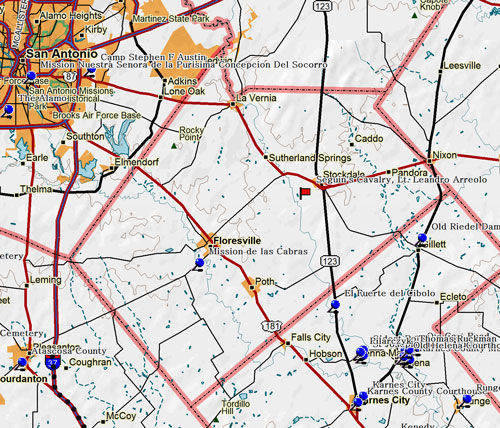 Marker Title: John Reagen Baker
Address: US 87
City: Stockdale
County: Wilson
Year Marker Erected: 1969
Marker Location: In Stockdale Cemetery, US 87 Bypass, Stockdale. Take main entrance to cemetery, drive to the right of the flagpole. Marker and grave located south of curve.
Marker Text: Adventurer-soldier of early Texas. Fought in Mexico to win freedom for the unsuccessful "Republic of Rio Grande" in 1840. Was elected sheriff of Refugio County and organized a company of minutemen. In 1842 he fought against three Mexican raids into Texas. Then participated in the disastrous Somervell and Mier expeditions into Mexico, during which he was wounded. Returned to Texas and entered mercantile business. Wife was Avis (Brown). Recorded -- 1969

Marker Title: Fairview
Address: FM 536 & 2505, Fairview
City: Fairview
County: Wilson
Year Marker Erected: 1988
Marker Location: From Floresville, take FM 536 west 12 miles to intersection with FM 2505.
Marker Text: Near this crossroads was once the flourishing community of Fairview. The village began shortly after the Civil War, when Henry Hudson opened a store on the Old Oakville Road. A post office was established in the store in 1868. Fairview grew to include homes, churches, doctors' offices, a blacksmith shop, cotton gin, public school, Masonic Lodge, and telephone exchange. The area's economy was based on agriculture, and the main crop was cotton. The advent of the boll weevil and other pests which attacked the cotton crop played a large part in the eventual decline of the town following World War I. Fairview was the hometown of twenty-seven Texas peace officers, including twenty Texas Rangers. Among the Rangers was Frank Hamer (1884-1955), who is best remembered for his role in pursuing notorious Depression-era outlaws Bonnie Parker and Clyde Barrow. Still remaining and in use in the area is the Fairview Cemetery, originally called the Rock Church Cemetery due to its position next to a Methodist church built in the 1870s. With grave markers dating from the 1860s, it is one of the few remaining physical reminders of the town. (1988)

Marker Title: The Flores de Abrego Family and Floresville
Address: 4th and B St.
City: Floresville
County: Wilson
Year Marker Erected: 1986
Marker Location: Intersection of 4th and B Streets at steps of courthouse, Floresville.
Marker Text: The Flores de Abrego family came to the New World from northern Spain before the time of the American Revolution. During the 18th century, members of this family brought their cattle northward and established ranches along the San Antonio River. The head of this family was Francisco Antonio Flores de Abrego II (d. 1757), who married Rosa Hermenegilda Hernandez. Their son, Jose Joaquin Flores de Abrego (1742-c. 1800), grew up on the San Bartolo Ranch in present Karnes County. Jose Joaquin's grandsons Manuel, Salvador, Nepomuceno, and Jose Maria later fought on the side of the Texians during the revolution for independence from Mexico. In 1854 Josefa Agustina Flores de Abrego, daughter of Jose Maria Flores de Abrego, married Samuel William Barker, who became Wilson County's first sheriff in 1860. In 1867 Josefa's donation of 200 acres of land was accepted by the County Commissioners Court as the site for the new county seat. As she requested, the new town was named Floresville in honor of her ancestor, Francisco Antonio Flores de Abrego II. As prominent ranchers, with cattle brands registered in Floresville, the Flores de Abrego family played an important role in the colonization of this area. Texas Sesquicentennial 1836-1986

Marker Title: La Vernia
Address: US 87
City: La Vernia
County: Wilson
Year Marker Erected: 1968
Marker Location: On US 87 in front of city hall, La Vernia.
Marker Text: Established about 1846 or 1847 by Claiborne Rector, who built a stage stop and blacksmith shop here to serve travelers on the Chihuahua Road, a major trail in early Texas. Main Street today follows route of the old road. Settlement was called "Post Oak" until mail service started, 1856. Name was then changed to Spanish "La Verdear" because of many green oaks in area. English speakers called it "La Vernia". Like much of Texas, this area was settled by southerners in search of fertile land. In Civil War, La Vernia was a recruiting and officer training center.

Marker Title: Site of Old Town: Lodi
Address: FM 536 & Goliad Road
City: Floresville
County: Wilson
Year Marker Erected: 1971
Marker Location: At junction of FM 536 and Goliad Road on the west edge of Floresville.
Marker Text: Community in an area known by 1720 as land of the Cayopines, a Coahuiltecan Indian tribe. The site was important to Spanish missions of San Antonio, since here along the river their herds were pastured. For the herdsmen, adobe huts were built. After the Apache Indians began to raid the area in 1731, the herdsmen took refuge across the river within the stronger walls of the Mission Cabras. The Pena brothers had Rancho San Eldifonzo Del Chayopin here from 1756 to 1787, and a nephew applied for title when mission lands were secularized in 1794. However, award was made to Simon and Juan Arocha. Their neighbors (descended from Canary Island colonists of 1731) included Jose Maria Flores and Erasmus Seguin. Stephen T. Cook settled here in 1858, putting in a store and securing office of postmaster. He may have named Lodi for a town in Mississippi, his old home state. Wilson County was organized in an election held Feb. 13, 1860. Samuel W. Barker (husband of local aristocrat Josefa Flores) became the first sheriff of the new county. Improved roads were built here. After the Civil War, Wilson County voters on Dec. 8, 1867, designated Lodi county seat--an honor lost to Floresville in 1872. Area then reverted to ranching. (1971)

Marker Title: Mission de las Cabras ("Mission of the Goats")
Address: SH 97, S of Floresville
City: Floresville
County: Wilson
Year Marker Erected: 1970
Marker Location: From Floresville take SH 97 approximately 2 miles south to marker.
Marker Text: A fortified visita of Mission Espada, founded 1731 in San Antonio. Situated near Paso de las Mujeres ("Crossing of the Women"), an important ford on the San Antonio River, known to most parties obliged to travel between Mexico and San Antonio. Meadowland along the river and near the crossing was used to pasture cattle owned by Mission Espada. Indians under Espada's protection were kept here to herd the cattle. For the care of souls of the herdsmen, a chapel was built. The 1895 guide, "San Antonio at a Glance," described the Old Cabras site as a 2-acre, diamond-shaped lot with bastions at each end. After secularization of the missions in 1794, lands here were owned by one of the descendants of Spain's colonists from the Canary Islands, Ignacio Calvillo. In turn, the Cabras site was inherited by Calvillo's flamboyant daughter, Dona Maria Del Carmen (born in 1765). Noted for her independent spirit, she forsook her husband, Gavino Delgado, and personally managed the ranch, her long black hair flying in the wind as she rode a great white horse. She kept down Indian troubles by paying tribute in beef. In her time and for a century afterward Old Mission Cabras remained in use for rites of the church. (1970)

The Site of the Mission of las Cabreras

Marker Title: The Site of the Mission of las Cabreras
County: Wilson
Year Marker Erected: 1936
Marker Text: A ranch chapel visited regularly and maintained by the Franciscan missionaries of San Antonio near the ancient settlement of Las Islitas (now Graytown); attended by the Canary Islanders, their descendants, Mexicans, natives and other living in this vicinity; established in the middle-eighteenth century.

Marker Title: Rector Chapel Cemetery
Address: FM 2772
City: La Vernia
County: Wilson
Year Marker Erected: 2002
Marker Location: From the intersection of Chihuahua St. & 775 N in downtown La Vernia go one mile to the intersection of FM 2772; go right on FM 2772 for 6/10 of a mile and turn right into a private drive and go about 400 ft. to the cemetery.
Marker Text: Rector Chapel Cemetery William Robert Wiseman (1816-1888) was a successful farmer and owned the first cotton gin in La Vernia. William Claiborne Rector (1805-1873), a hero of San Jacinto, farmed, served as postmaster and provided horses for the local stage line. The two men were close friends and together organized the Cibolo Presbyterian Church in 1852. Following Rector's death in 1873, a new chapel was built on Wiseman's farm; he named it after his good friend and, in 1877, set aside four acres "for church and burying purposes." The chapel was moved to La Vernia in 1891, but these gravestones remain, a record of La Vernia's rich heritage. Historic Texas Cemetery-2002

Seguin had one hundred thirty men and only ninety horses and mules combined. On April 17th, a party of Tonkawas made an early morning raid on the camp, stealing thirty-two of the horses. A party of sixteen under Lieutenant Leandro Arreolo were immediately ordered to pursue them. Seguin wrote:

"They did so and overtook them at a place called Las Cuevas, about 36 miles from our camp. They had a small skirmish with them without either party being injured, retook the horse and arrived in camp with them about 12 o'clock the same day. There were about one hundNative Americans."

Captain Seguin moved from Camp Vigilance and established Camp Houston in late March, 1837. Captain Seguin and six of his men were searching for wild horses when on the morning of March 21st they had a run-in with seven Tonkawa Indians near Cibolo Creek. Seguin wrote:

"In the encounter we killed two of them, took two of their horses and wounded another Indian, who escaped with the balance, without any loss on our side. From appearances I have good reason to believe that they had been in among the American settlements and have no doubt committed depredations there as they had American horses with them, no arrows left in the quivers, and from other certain signs on those whom we killed I drew this conclusion."