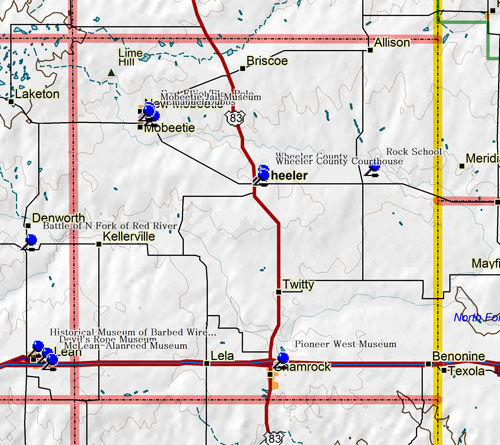 Drawing from the book, Panhandle Pilgrimage,
by Pauline Durrett and R.L. Robertson

Marker Title: Fort Elliot
Address: SH 152, W of FM 48
City: Mobeetie
County: Wheeler
Year Marker Erected: 1936
Marker Location: From Mobeetie, take S.H. 152 about .8 mile west of intersection with F.M. 48
Marker Text: Established June 5, 1875. One of the last forts established in Texas for purpose of clearing the region of Indians. Around it Mobeetie, rendezvous of buffalo hunters and traders, grew up. The post was abandoned in 1889.

Marker Title: Fort Elliot Flagpole
Address: SH 152
City: Mobeetie
County: Wheeler
Year Marker Erected: 1966
Marker Location: At flagpole of old jail in Old Mobeetie, south of S.H. 152.
Marker Text: First stood about a mile to the northwest, at Fort Elliott, established 1875 to protect the Texas Panhandle from Indians. J. J. Long, teamster-merchant, who arrived with the soldiers, was hired to provide a flagpole for the fort. In cedar breaks near Antelope Hills, 30 miles away, he cut two huge trees and hauled them here by wagon to build this 50-foot pole. After Fort Elliott closed in 1890, Long bought the pole and placed it in front of his store. Later, at Mobeetie school for 20 years; it was erected here 1949. (1966)

Marker Title: Wheeler County Courthouse
Address: 401 Main St.
City: Wheeler
County: Wheeler
Year Marker Erected: 2000
Marker Text: Named for Royal T. Wheeler, an early Texas jurist, Wheeler County was created by the Texas State Legislature in 1876. In 1879 the county was organized and Mobeetie (then known as Sweetwater), the only town in the county, became the county seat. A stone courthouse was erected from locally quarried materials in 1880. That structure was replaced with a wood frame building in 1888. As the area grew and its center changed, the town of Wheeler was officially designated the county seat in 1908. The wooden courthouse was moved to this site, but by 1913 it was too small to serve the county's needs. A separate building was erected on the southwest corner of the courthouse square that year to house the county clerk's office; it was enlarged in 1923. A bond election held in 1925 set aside funds for a new courthouse. The 1888 courthouse was sold to Sheriff Riley Price, who dismantled it and used the lumber to build barns on his ranch east of town. Designed by E. H. Eads of Shamrock, the edifice was built by local contractors Hughes and Campbell. Featuring Palladian windows and Corinthian columns characteristic of the Classical Revival style, the 1925 Wheeler County Courthouse typifies the favored style of American public buildings of its time. The 1913 county clerk's office was torn down in 1929; curbs and sidewalks were in place after the summer of 1930. Gas heat and a water system were installed in 1926. The streets on all four sides of the courthouse were paved in 1944 and the surrounding streets in the late 1970s. Standing prominently on the town square, the historic Wheeler County Courthouse continues to serve as the center of local government. Recorded Texas Historic Landmark-2000