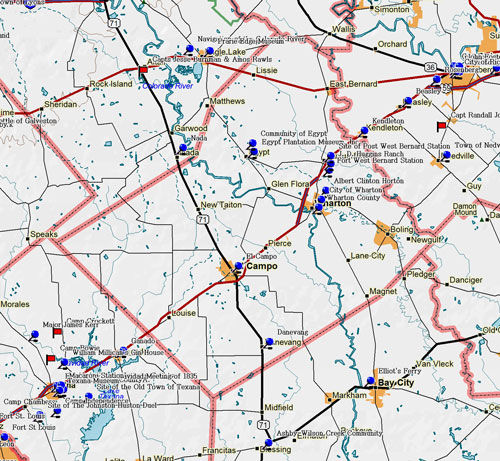 Marker Title: Community of Egypt
Address: FM 102
City: Egypt
County: Wharton
Year Marker Erected: 1970
Marker Location: FM 102 in Egypt
Marker Text: One of most historic towns in county. Named following the drouth of 1827, when pioneers of Stephen F. Austin's colony came to this fertile region to obtain corn. They called it "Goin down into Egypt for corn", after biblical passage. Noted patriots were among earliest settlers: Eli Mercer, one of first sugar producers in Texas; and W. J. E. Heard, leader of citizen soldiers. Others were dairy king Gail Borden; William Menefee, a signer of the Texas Declaration of Independence; and Maj. Andrew Northington, stagecoach operator and surveyor.

Marker Title: El Campo
Address: 315 E Jackson St.
City: El Campo
County: Wharton
Year Marker Erected: 1990
Marker Location: 315 E Jackson St., at El Campo City Hall
Marker Text: Begun as a camp on the New York, Texas, and Mexican Railroad in 1882, El Campo initially was known as Prairie Switch and served as a supply and shipping center for area ranchers. By the 1890s the town had grown to include a post office, homes, businesses, schools, and churches. An influx of European immigrants produced a strong ethnic heritage. Fires in 1896 and 1901 destroyed much of the downtown area, but the city rebuilt. Oil and gas discoveries in the 1930s provided an economic boom, although agriculture remains the primary local business.

Marker Title: Albert Clinton Horton
Address: 500 Park Drive
City: Wharton
County: Wharton
Marker Location: Albert C. Horton Mini Park, 500 Park Dr., (in City Park on Old Lane City Rd.), Wharton.
Marker Text: Georgia native Albert Clinton Horton came to Texas in 1834 from Alabama, where he had served in the state legislature. He established a plantation along Caney Creek in present Wharton County. In 1835, he returned to Alabama to recruit volunteers for the Texas army, and he served as colonel of a cavalry unit during the Texas revolution. Upon the establishment of the Republic of Texas in 1836, Horton was elected to Congress. He was chairman of the commission appointed by President M. B. Lamar, which selected Austin as the site for a permanent capitol for the Republic of Texas in 1839. When Texas became a state in December 1845, Horton was elected its first lt. governor. He served as acting governor for a year while Governor Henderson was leading Texas forces in the Mexican war. When Baylor University was founded in 1845, Horton was a charter trustee. By the 1850s, he had homes in both Wharton and Matagorda. His home near this site, "Sycamore Grove," was razed in 1960. A community leader, he helped found Wharton's First Baptist Church. He and his wife, Elias Holliday, had six children, only two of whom lived to maturity. Horton died in 1865, and is buried in Matagorda Cemetery.

Marker Title: J.D. Hudgins Ranch
Address: SH 60
City: Hungerford
County: Wharton
Year Marker Erected: 1985
Marker Location: On SH 60 in traffic triangle, surrounded by Colorado, railroad & Mckinney Sts., Hungerford.
Marker Text: Joel Hudgins (1800-1873) of North Carolina came to the Republic of Texas in 1839 and settled in the Hungerford area. He married Rachel Ann Northington McKenzie (d. 1903) in 1847. He was elected county commissioner in 1854. After Joel's death, Rachel and their four sons began to buy more land and expand the ranching operation. Josiah Dawson (J. D.) Hudgins (d. 1928) headed the family's interests. He also owned a store, cotton gin, sawmill, and grew rice. In 1897 the four brothers divided the family property and operated independently. In 1915 J. D. and his children purchased their first purebred Brahman cows, descendants of the herd brought from India by A. P. Borden in 1906. J. D.'s son Walter Hudgins (d. 1943) helped organize the American Brahman Breeders Association in 1924. The Hudgins Ranch acquired the bull "Manso" in 1933. Manso's descendants are the cornerstone stock from which the ranch's American Gray Brahman herd was developed, now one of the largest registered American Gray Brahman herds in the world. Cattle from this ranch have been exported to over 42 countries and 34 states in the U.S. In 1962 the ranching partnership was reorganized into five separate entities, with each division operated by descendants of J. D. Hudgins.

Marker Title: Site of Post West Bernard Station
Address: SH 60
City: Hungerford
County: Wharton
Year Marker Erected: 1985
Marker Location: On SH 60, in traffic triangle, Surrounded by Colorado, railroad, and McKinney St., Hungerford.
Marker Text: In the summer of 1837 Post West Bernard Station was established as an ordnance depot of the army of The Republic of Texas. Its location on the West Bernard River was strategic in protecting Houston, then capital of Texas, from possible invasion by Mexico. Cannons, rifles, muskets, powder, and shot were stored at the station. Troops under Lt. H. L. Grush and later Capt. Martin K. Snell maintained the post despite harsh living conditions. In 1838-39 this station transferred its inventory of ordnance to the newly completed Houston Arsenal.

Marker Title: City of Wharton
Address: 101 W. Burleson
City: Wharton
County: Wharton
Year Marker Erected: 1986
Marker Location: 101 W. Burleson, Wharton
Marker Text: The town of Wharton was founded as the seat of Wharton County in April 1846. Land for a courthouse, named Monterey Square, was given from the land grant of William Kincheloe, one of Stephen F. Austin's "Old Three Hundred" colonists who settled in this area in 1822. The townsite was surveyed by Virgel Stewart and William J. E. Heard, and the rich farmland attracted many settlers. The advent of railroads and irrigation brought increased settlement to the town, which remains a center of agricultural, educational, industrial, and medical services for a large area.