Following his exemplary service as scout for the Texas Army during the Revolution, Smith was given command of the San Antonio Ranger Company. Texas Secretary of War, William Fisher, ordered the company to occupy Laredo, asserting the Republic's authority on the Rio Grande. Mexican scouts discovered Smith's camp on the edge of the San Ygnacio Ranch on the Arroyo Chacon, just east of Laredo. Smith writes:

Early the next morning, taking one man with me, I went out to view the road and, if possible, to take a prisoner in order to ascertain the force of the enemy station in the town. I then found the trail of the cavalry sent out to intercept us and returned to camp and prepared for their reception.

A force of forty Mexican cavalry dropped onto his company. He later reported:

We had scarcely prepared for battle when the enemy commenced firing on my right and left, at about 150 yards distant-a portion of their force advancing with great rapidity to my rear-keeping up a brisk firing on my right, left and rear.

When they were about 50 yards distant, I returned their fire, giving strict orders that not a piece should be discharged until every man was sure of his aim. The engagement had continued about forty-five minutes when the enemy retreated, leaving ten killed and taking off about as many wounded.

Smith's men were successful at capturing twenty horses and returned to San Antonio, aware of the strong military presence awaiting them in Laredo. He credited "cool action under fire" to nineteen year old Private Jack Hays as well as Sergeant N. M. Dawson, to whom he turned over command of the company. Smith, stung by criticism by President Houston for losing a horse herd a few weeks before the battle as well as engaging the Mexican cavalry, thus jeopardizing the Republic of Texas' tentative agreements of it's former enemy to the south, chose to resign his commission at Fort Bend in Richmond where he died in November of the next year. Telegraph and Texas Register had a different opinion of Smith's Laredo fight stating that the Mexican military didn't stand a chance "against even half their number of the sturdy backwoodsmen of the west." His reputaiton remained intact and in 1876, Deaf Smith County was created from Bexar Territory.

Marker Title: Benavides Brothers
Address: St. Augustin Plaza
City: Laredo
County: Webb
Year Marker Erected: 1976
Marker Location: On St. Augustin Plaza, east side of lawn.
Marker Text: Members of a prominent Laredo family, the three Benavides brothers were the descendants of Tomas Sanchez, who founded the city in 1755. Santos (1823-1891) and Refugio Benavides (b. 1824) and their half-brother Cristobal (1839-1904) were best known for their service in the Confederate army during the Civil War (1861-1865). Santos commanded a regiment in the 33rd Texas Cavalry and rose to the rank of colonel, the highest rank achieved by a Mexican-American in the Confederate army. Both Refugio and Cristobal earned the rank of captain. Stationed along the Texas-Mexican border, the brothers encountered both bandits and Union forces. In May 1862, they defeated a large raiding party led by Juan Cortina at Carrizo (now Zapata). In March 1864, although their troops were badly outnumbered, they defended Laredo against an army of Texas unionists. Their victory helped insure continuation of the vital Confederate cotton trade between Texas and Mexico. The Benavides brothers also distinguished themselves as political, commercial, and social leaders in Laredo. Santos and Cristobal operated one of the city's most prosperous mercantile companies. Santos also served in the state legislature, 1879-1884. (1976)

Marker Title: Refugio Benavides
Address: Saunders St. in Catholic Cemetery
City: Laredo
County: Webb
Year Marker Erected: 1990
Marker Location: Catholic Cemetery, Saunders Street cemetery block 21 northeast section.
Marker Text: A native of Laredo, Jose Del Refugio Benavides was a descendant of Tomas Sanchez, who founded the city in 1755. As a member of one of Laredo's most celebrated families, he was instrumental in the city's development during the 19th century. He was elected to the office of alderman in 1850 and mayor in 1859. During the Civil War Benavides and his brothers were active in defenses along the Texas-Mexico border. Rising to the rank of Captain, Refugio Benavides commanded a company in the 3rd Texas cavalry. His actions in defending the border against invasions by union troops and Mexican raiders led by Juan Cortina helped retain the valley's important role as a vital cotton-exporting site for the Confederacy. In 1873, following Reconstruction, Refugio Benavides was again elected mayor of Laredo and served three successive terms. Among the accomplishments of his political career were improved public schools, city sewage systems, and the revision of the city charter. Married twice, Benavides was the father of six children. He died in 1899 and was buried in the old Catholic cemetery. He was reinterred here during World War II. (1990) 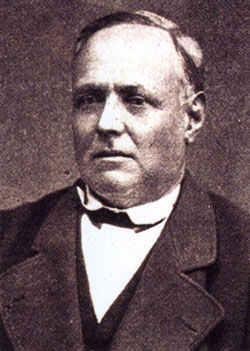 Marker Title: Santos Benavides
Address: Saunders Street, Catholic cemetery
City: Laredo
County: Webb
Year Marker Erected: 1995
Marker Location: Catholic Cemetery Block 8 (south central)
Marker Text: Santos Benavides, son of Jose Jesus and Marguerita Benavides and great-great grandson of Laredo founder Tomas Sanchez, was born in Laredo on November 1, 1823. He married Augustina Villareal in 1842. Benavides, appointed procurador (administrative agent) of Laredo in 1843, openly cooperated with the forces of Mirabeau B. Lamar which occupied Laredo during the Mexican War (1846-48) in an effort to pacify the region. He was elected mayor of Laredo in 1856 and 1857 and chief justice of Webb County in 1859. During the Civil War Benavides raised a company of cavalry at Laredo which defeated Juan Cortina in the Battle of Carrizo in 1861. He became a colonel in command of his own regiment known as Benavides' Regiment. On March 19, 1864, his regiment successfully defended Laredo with only 42 men against a Union force of more than 200 men. During the late 1860s and 1870' Benavides engaged in mercantile and ranching activities with his brother Cristobal. He served in the Texas Legislature during the 1880s and in 1884 was appointed Texas Commissioner to the world's Cotton Exposition. Benavides helped found the Guarache party, a faction of Laredo's Democratic Party. He died in Laredo on November 9, 1891. Sesquicentennial of Texas Statehood 1845-1995

Marker Title: Fort McIntosh
Address: Washington Street
City: Laredo
County: Webb
Year Marker Erected: 1974
Marker Location: Entrance to Laredo College, Washington Street entrance.
Marker Text: Established March 3, 1849, by troops of the 1st U.S. infantry from ringgold barracks under command of Lt. E. L. Viele. The star-shaped earthen fortress built on a bluff overlooking the Rio Grande (1/2 mile northwest), was first called Camp Crawford, in honor of Secretary of War George W. Crawford. On January 7, 1850, the name was changed to Fort McIntosh for Lt. Col. James S. McIntosh, who died Sept. 26, 1847, of wounds received two weeks earlier in the Mexican War Battle of Molino Del Rey. During the 1850s, Fort McIntosh served as a vital link in the defense system along the Rio Grande frontier. The post was abandoned in March 1859, reoccupied in January 1860, and abandoned again in April 1861, when the U.S. Army left Texas after secession. Soon after the Civil War, Fort McIntosh was reoccupied and moved to this location in 1869. Until the mid-1880s, soldiers were involved in escort duty and scouting for raiding Indians and bandits on both sides of the Rio Grande. After the turn of the century, the Fort McIntosh garrison was deployed along the border to prevent incursions by Mexican revolutionaries, and the post served as a training camp for soldiers who fought in both world wars. Fort McIntosh was discontinued as an army post on June 9, 1947, after 98 years of service. (1974)

Marker Title: Fort McIntosh Barracks
Address: Washington Street
City: Laredo
County: Webb
Year Marker Erected: 1974
Marker Location: On administration building
Marker Text: The last remaining of three brick barracks constructed in 1880 by the U.S. Army to quarter troops engaged in scouting and escort duty along the Rio Grande. The structure originally had four large rooms, divided by a central stairway. The exterior has not been altered. Soldiers who occupied the building served in the Spanish-American War and both world wars. Ownership of Fort McIntosh was transferred to Laredo Junior College in 1947. Recorded Texas Historic Landmark - 1962

29-Republic of the Rio Grande

Marker Title: Republic of the Rio Grande
Address: St. Augustin Square
City: Laredo
County: Webb
Year Marker Erected: 1976
Marker Location: East side St. Augustine Sq. on lawn
Marker Text: In January 1840 Senor Antonio Canales and other Federalists met near Guerrero to found the Republic of the Rio Grande. Canales and friends were loyal to the Mexican constitution of 1824, which had been set aside by Centralists in Mexico City. The Republic was to govern northern Mexico and the part of Texas south of the Nueces. Jesus Cardenas was president; Francisco Vidaurri y Villasenor, vice president; and Juan Francisco Farias, secretary. The capitol was established at 1000 Zaragoza Street, on this plaza in Laredo. Centralist General Manuel Arista brought an army here to crush the Republic. In March he took Laredo without a fight; then after a battle at Morelos, he captured and killed Federalist leader Antonio Zapata. Mexican and Anglo-Texan Federalists counterattacked, and recaptured Laredo and several other towns; but confronted by a large Centralist force at Saltillo, the Anglo-Texans found themselves and some Carrizo Indians making a lone stand. Many comrades had fled. After a bloody battle, the Indians and Texans escaped to the north of the Rio Grande. Canales, deserted by his army, surrendered to Arista near Camargo, and in a few days Cardenas gave up Laredo. The Republic of the Rio Grande had lasted 283 days. (1976, 1994)

29-Republic of the Rio Grande Museum

Part of our in-depth series exploring the Mountain Pacific Forts The following is from the book, Indian Wars, by Bill Yenne. On August 15, three...

Captured by the Indians (Frederick Drimmer): Capture, Torture, On the Trail, Escape

The below first-hand account is from the book, Captured by the Indians,
by Frederick Drimmer.