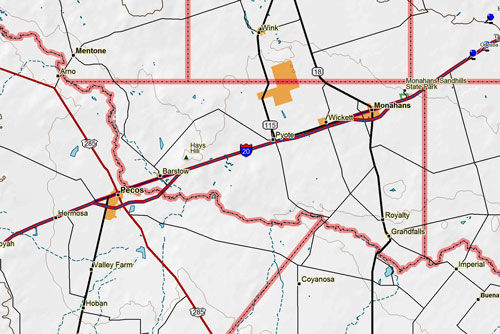 About the second of March, 1870, J. F. P. Kruse, and ten or eleven men, some of whom had their families, were returning from New Mexico to Texas. When the travelers reached the Dagger Bend of the Pecos, somewhere in the vicinity of the present Ward and Loving Counties, and when citizens saw a mysterious signal smoke in the distance, they camped for the night. The next morning the travelers moved on toward Menard. Late in the evening, another party returning from New Mexico camped at their camping place, and found campfires still burning. The next morning about the break of day, this second group was charged by Indians, and for some time, besieged by the savages, who went away.

Marker Title: Monahans Sandhills State Park and Museum
Address: US 80/IH-20
City: Monohans
County: Ward
Marker Location: About 6 miles E. of Monahans on US 80/I-20 at visitors center in Sandhills State Park.
Marker Text: In these shifting seas of sand, rich in stone evidences of primitive men, today's visitors find flint points, sandstone metates and manos of peoples who were here as early as 10,000 years ago and late as the 1870s. Bones of great mammoths and gigantic bison prove that this desert was in post-glacial times a land of lakes and tall grasses. Cabeza de Vaca in 1535 and Antonio de Espejo in 1583 encountered Jumanos, historic tribe which hunted here. In 1590 Castano de Sosa found a tribe he called Vaqueros because they lived by hunting cows (buffalo)--the tribe later called Apaches. For more than 100 years at this stop on great Comanche War Trail extending into Mexico. Apache fought Comanche for pools of water and acorns of dwarf Shinnery oak. The California or Emigrant Trail through the Sand Hills started with the gold rush. Was first mapped in September 1849 by Capt. Randolph B. Marcy, U.S. topographical engineers, and in 1854 by Capt. John Pope, who explored a railroad route toward the Pacific Ocean. 3,000 acres of Sand Hills were designated in 1957 as a state park, after acquisition and construction of museum by Ward County. Has picnic facilities.

The Big Raid in Young County, During October of 1864

Young County, Texas To describe a gigantic Indian raid, when a large number of blood-thirsty warriors break into smaller bands and each division...