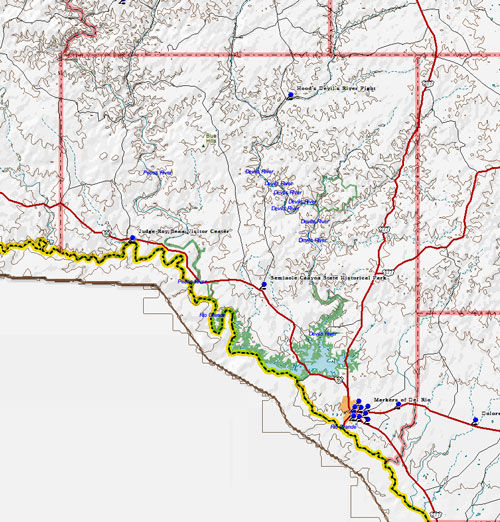 Marker Title: Roy Bean C.S.A.
City: Del Rio
County: Val Verde
Year Marker Erected: 1965
Marker Location: Next to seminole - African Scouts Marker (at Whitehead Museum), Del Rio.
Marker Text: Born in Kentucky. A trader in Mexico, 1848. Mining in New Mexico when Civil War broke out. As spy and scout, joined Texans in the Command of Gen. John R. Baylor during the 1861-1862 Arizona-New Mexico Campaign. Organized irregular company called "Free Rovers". In a narrow canyon, took part in capture of 800 federals by 250 Confederates. After 1862 was a Confederate freighter, hauling cotton to Matamoros from San antonio and bringing into Texas wartime goods: guns, ammunition, medicines, cloth, shoes, food. In 1882, began following with a tent saloon crews building railroad along the Rio Grande. Cooperating with Texas Rangers, was appointed justice of peace-- "Law West of the Pecos". Tamed rough frontier town of Langtry, where he spent rest of his life. Won fame in unique court decisions, as in trial and fining of a dead man for carrying a concealed wapon. Most widely celebrated show he staged was Fitzsimmons-Maher world championship boxing match, on a Rio Grande sand bar near his saloon in 1896. Court was held in the saloon, where he displayed pictures of "The Jersey Lily"--British actress Lily Langtry, whom he never met. She visited town at his invitation, but only after Judge Bean's death.

Marker Title: Site of Camp Del Rio
Address: De La Rosa St.
City: Del Rio
County: Val Verde
Year Marker Erected: 1980
Marker Location: Just West of 277 South intersection with De La Rosa Street, Del Rio.
Marker Text: A United State Army post was established in this area on September 6, 1876. Originally known as Camp San Felipe, it was an outpost of Fort Clark (28 mile E), one of a chain of military fortifications constructed to defend isolated settlements of the Southwest Texas frontier. General E.O.C. Ord, Commander of the department of Texas, created the camp to protect the border area from raiding parties of Indians in Mexico who entered Texas to secure horses along the Pecos and Devil's Rivers. In 1880 the San Felipe Agricultural, Manufacturing and Irrigation Company donated land at this site to the United State Government for use as a military reservation. Since the original shareholders of the firm had founded the town of Del Rio, the camp name was changed. The grounds here included officers' quarters, a hospital, bakery, quartermaster's storehouse, and barracks. Later, when it was discovered some of the structures had been built on private property, additional land was leased from the owners. Indians raids in the area had ended by 1890 and the troops were moved to other posts. Camp Del Rio was officially abandoned the next year and the land was later transferred back to the original owners. (1980)

Marker Title: Site of Chihuahua Road (Crossing at West end of Bridge)
Address: US 90, W of Del Rio
City: Del Rio
County: Val Verde
Year Marker Erected: 1968
Marker Location: From Hwy 90 W 8 miles East of Del Rio.
Marker Text: In the 19th Centery, a life line that connected Chihuahua, Mexico, with the Texas port of Indianola. Opened to exploit rich trade in Mexican silver and gold, the road eventually carried every type of goods (including, in 1860, 27 camels), adventurers, settlers, soldiers, and "forty-niners" bound for the California gold rush. All sorts of vehicles used the Chihuahua Road: stagecoaches, wagons, ox-carts, and traveling ambulances, which were light carriages with 4-foot wheels. Not until the railroad came to San Antonio, 1877, did this road lose its commercial importance. 1968

Marker Title: Hood's Devil's River Fight
Address: FM 163 and 189
City: Del Rio
County: Val Verde
Year Marker Erected: 1987
Marker Location: At intersection of 163 N and 189 E at 40 miles N of 90 W.
Marker Text: The men of Company G, a small unit of the U. S. 2nd cavalry, left Fort Mason on July 5, 1857, under the command of Lt. John Bell Hood (1831-1879), in pursuit of Comanche Indians in the vicinity. Traveling northwest, they discovered a fresh Indian trail leading southward toward Mexico. Crossing bluffs near the Devil's River on July 20, the men encountered an Indian camp on a ridge about two miles from the steam, marked by a white flag. Suspecting an ambush, Hood proceeded cautiously toward the ridge. A small band of Indians advanced to meet Hood's party. Then, throwing down the flag to signal their concealed allies, the Indians attacked. Outnumbered, and hampered by brush fires set by Indian women, the soldiers were forced into fierce hand-to-hand combat. They heard the loud cries of Comanche women through the smoke and dust, indicating an Indian retreat. Two cavalrymen, William Barry and Thomas Ryan, were killed, and five others, including Hood, were wounded. Later reports revealed that nineteen Indians were killed, and many more wounded. Hood and his men were later cited for valor in army reports. 1987)

Marker Title: Seminole-African Scouts
Address: S. Main St.
City: Del Rio
County: Val Verde
Year Marker Erected: 1968
Marker Location: S. Main at Whitehead Memorial Museum.
Marker Text: Serving with the U.S. Army at Forts Duncan and Clark and Camp Del Rio (1870-1881). The Scouts were key figures in ridding Texas of hostile Indians. The 100 Scouts were mainly descendants of runaway slaves who had intermarried with the Florida Seminoles, later moved to Oklahoma Indian Territory. They were invaluable because of their uncanny trailing skill, bravery, and ability to survive on meager rations (including rattlesnakes) during months of tracking. During an 8-year span of fighting under Lt. J.L. Bullis, not one scout was killed. (1968)

Marker Title: Val Verde County Courthouse Square
Address: 400 block of Pecan St.
City: Del Rio
County: Val Verde
Year Marker Erected: 1980
Marker Location: 400 block of Pecan, Del Rio
Marker Text: Organized in 1885 from sections of Crockett, Kinney, and Pecos Counties, Val Verde County was named for a Civil War battle in New Mexico which involved Texas Confederate Forces. The growing railroad town of Del Rio was chosen as the seat of Government and Commissioners set up offices in a commercial building on Perry Street, now South Main. Soon after formation of the county, the Limestone Jail was built here on a corner of the public square. During construction of the courthouse, it provided additional office space. A three-story annex to the building was completed later. The Limestone Courthouse was constructed at this site in 1887. Architects were A.O. Watson and Jacob Larmour of Austin, designers of Courthouses in Milam and Comanche Counties. Built by the contracting firm of Hood and McLeod, it features classical revival detailing and octagonal corner turrets. As the area population increased, the buildings were modified to provide for the expansion of services. A separate facility for the Sheriff's office and county prisoners was completed in 1956, and the old jail was remodeled for use by other departments. (1980)