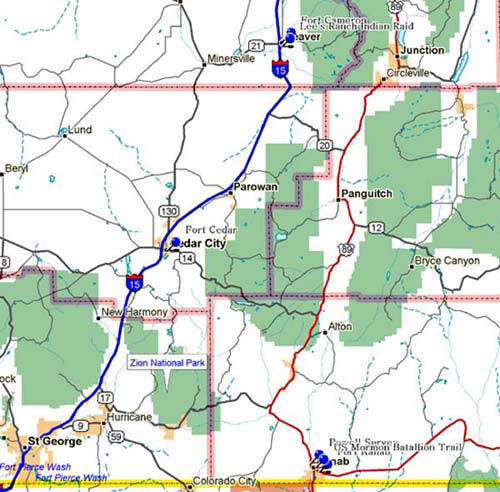 Marker Topic: Fort Cameron
Address: 200 E. Main Street
City: Beaver
County: Beaver
Marker Text: Established as a post of Beaver, May 15, 1872 by the 8th US Infantry, Major John D. Wilkins commanding, the military reservation declared May 12, 1873. Comprised two and two-thirds square miles. The name was changed July 1, 1874 to Fort Cameron in honor of Colonel James Cameron who fell at Bull Run July 21, 1861. The post was abandoned May 1, 1883 and the improvements sold to John R. Murdock and Philo T. Farnsworth. The L.D.S. Church conducted there the Beaver Branch of the Brigham Young Academy (later University) from 1898 to 1922.

Marker Topic: Fort Cedar
Address: 600 W. Old Fort Indus Rd.
City: Cedar City
County: Iron
Marker Text: In November 1851, thirty-five men from Parowan settled Cedar City. A unique temporary encampment composed of their wagon boxes and sage brush walls sheltered them through the first winter. In 1853 a fort 100 rods square was built on this site. Its walls were 3 feet wide at the base, nine feet high and one foot wide on top. It covered 63 acres of ground. A city plat of 120 lots was laid out inside the walls.

Marker Topic: change
Address: Near S. Hwy 89
City: Kanab
County: Kane
Marker Text: The earliest outpost established in this area was Fort Kanab, built in 1864, just west of the present town on the east bank of Kanab Creek. The fort was erected as a protection against Indians, and as a base for exploring the region extending south into the Moqui Indian Country, in what is now Arizona, and east to the “Ute” fork of the Colorado River, now commonly known as “The Crossing of the Fathers.”

Severe and frequent Indian attacks developing into a general war, made it impracticable to maintain the fort, and it was abandoned in 1866. However, it was reoccupied in 1870 by Jacob Hamblin and others sent to do missionary work among the “Lamanites” - the Book of Mormon name for the American Indian.

Soon after the resettlement, nearly 100 Navajo Indians armed with guns and lariats approached the fort and demanded 70 horses and 17 beef cattle. The settlers refused the demand, and the battle followed in which 20 Indians were killed and the others driven off. Shortly after this incident, permanent peace was established.

Marker Topic: Lee's Ranch Indian Raid
Address: 1300 S. Main Street
City: Beaver
County: Beaver
Marker Text: Hostile Indians raided a small settlement in this vicinity on October 27, 1866, centering their attack on the house where Mr. and Mrs. J.P. Lee, their two daughters, and eight-year-old son, a young Mill Hall and Joseph Lillywhite were barricaded, fighting desperately. During the day-long battle, Lillywhite was seriously wounded. Lee killed three Indians and the house was badly damaged, partly by fire brands. Miss Hall and the eight-year-old son escaped and secretly journeyed by separate trails to Beaver to give the alarm. Posses of militiamen were organized and sent to the rescue. When they arrived, the Indians had departed.

Marker Topic: Powell Survey
Address: 200 W. 100 North
City: Kanab
County: Kane
Marker Text: From 1870 to 1876 Major Wesley Powell and assistant Almon H. Thompson of the U.S. Colorado River Explorations, established headquarters at Kanab. On this spot they erected a stone foundation and raised a tent which housed a telescope by this means the meridian was established. During the winter of 1872 and 1873 the first map of Grand Canyon was made and Major Powell gave the canyon its name. Frederick S. Dellanbough wrote the name on the first map. The men on Kanab helped in the work and were faithful, agreeable and competent.