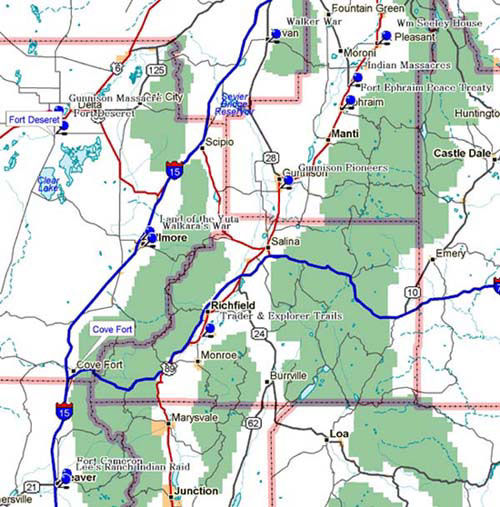 On August 1, 1866, U.S. Indian Supt. Col. H.F. Head and Stake Pres. Orson Hyde obtained promise of peace from Chief Black Hawk. By August 18, 1968, they had accomplished the hazardous feat of assembling a peace parley in Fort Ephraim on Hans Hansen’s lawn by a red cedar tree. Black Hawk calmed the defiant braves, a pipe of peace was passed, the treaty was signed and later ratified by U.S. Pres. Andrew Jackson. Black Hawk continued to help arrange peace parleys until other hostile chiefs had signed.

Marker Topic: Gunnison Pioneers
Address: 200 N. Main Street
City: Gunnison
County: Sanpete
Marker Text: Gunnison, Utah, was settled in 1859. As a precinct, Gunnison was granted weekly U.S. mail service in 1862. The Black Hawk War began in 1865. A bastion was erected in 1865, 362 feet southeast of here. It was used by General Pace and 1500 militiamen to help protect people and property of Gunnison and the surrounding settlements from warring Indians. The old fort surrounded a four block square running west and south from the Gunnison Ward chapel and Washington School block.

Marker Topic: Indian Massacre
Address: N. Hwy 132
City: Ephraim
County: Sanpete
Marker Text: Near this spot on Tuesday, October 17, 1865, Black Hawk, a Ute chief, led his warriors out of Cottonwood Canyon foraging for cattle. They stole the entire Ephraim herd. The men killed as the Indians came down the canyon were Benjamin J. Black, William T. Hite, William W. Thorpe, Soren N. Jespersen, and Martin P. Kurhe. William Thorpe was killed near Guard Knoll; Soren N. Jespersen, badly mutilated, died at Wire Grass Flat. Hansine J. Kurhe and a 17-year-old girl, Elizabeth Petersen, who were in the field west of town where they were gathering potatoes, were massacred. Jens Sorensen was killed April 12, 1865. The Indians left Kuhre’s 2-year-old son on the field unharmed. The seven were all placed side by side in one grave.

Land of the Yuta

Marker Topic: Land of the Yuta
Address: 50 W. Capitol Avenue
City: Fillmore
County: Millard
Marker Text: The role of the woman was to plant, provide meals, and to move camp. The role of the men, in contrast, was that of hunter and warrior. The greatest warrior and chief during the early pioneer period was the tall, handsome men named Walkara, the “Hawk of the Mountains.”

Born somewhere between 1808 and 1815 on the Spanish Fork River near what is now Provo, Walkara rose to power when he assumed the role of war chief in his father’s band, the Tim-pan-ah-gos Utes. The Hawk quickly increased his prominence as a leader by his skill and prowess as a “procurer” of horse flesh. Raiding as far away as the coast of California near San Luis Obispo, Walkara terrorized western ranches for over a quarter of a century until his death in 1855.

According to fragmentary accounts, his raids were conducted between 1825 and 1854. The largest number of horses stolen on any one raid was 3000 with several raids netting at least 1000 head. Horses could be sold at a mountain rendezvous for as much as $50 per animal or traded to other tribes for Indian children who were exchanged for ammunition, blankets, pots and pans, and trinkets at the Santa Fe slave market.

Inevitably the differences in culture, customs and economics brought the Utes and Mormon Pioneers into armed conflict. The Utes found their hunting and camping grounds increasingly crowded with settlements while the Christian values of the pioneers prevented them from ignoring the issue of slavery.

In 1853-54 and again in 1865-67, smoldering hostilities were fanned into open warfare. In 1872, with their ranks decimated by both war and disease, 1500 Utes were removed by treaty to the Uintah Indian Reservation in northeastern Utah. Today headquarters for the Ute Tribe of Utah or the “Northern Ute Tribe” as it is now called is located near the center of the reservation at Ft. Duchesne.

Marker Topic: William Stewart Seeley House
City: Mt. Pleasant
County: Sanpete
Marker Text: Built circa 1861, this house is significant as the reported site of the signing in September 1872 of the final peace treaty that ended the Black Hawk War between Mormon settlers and the Indians in the area. William S. Seeley was prominent in the establishment and subsequent growth of the City of Mt. Pleasant, serving for nearly 30 years as the Latter Day Saint Bishop in the community and concurrently as mayor to a total of seven years. Seeley lived in this house, reportedly the first built outside the walls of the pioneer fort, until his death in 1895.

The house is also significant as a well-preserved example of the central passage plan, a house type common in Utah from 1847 to 1900 but relatively rare in Mt. Pleasant. The rear additions were built circa 1880 and circa 1910. While the house has been covered with stucco, as was common with many adobe buildings, it is significant as one of the oldest and best preserved pioneer era structures in Mt. Pleasant.

Marker Topic: change
Address: Hwy. 89
City: Central
County: Sevier
Marker Text: The Old Spanish Trail supposedly the “largest, crookedest, most arduous pack mule route in the history of America,” passed through this valley. Launched in the late 18th century, the trail was used by caravans from New Mexico, carrying blankets to trade for horses and mules in California.

In 1826 the famous fur trader and explorer, Jedediah Smith, led a band of trappers through this region. Seeing good beaver hunting grounds and attempting to learn more about the geography of the area, the party continued west to California and made the first overland crossing of the continent from the American frontier.

This valley and much of southern Utah were explored for settlement in 1849 by a company of 50 men led by the Mormon Apostle Parley P. Pratt. The party made systematic observations of land, mineral and water resources. Following their recommendations, Mormon colonies were established in Juab, Pahvant, Utah. Sanpete and Little Salt Lake Valleys (sic).

Marker Topic: Walkara's War
Address: 50 W. Capitol Avenue
City: Fillmore
County: Millard
Marker Text: When the Utes welcomed Brigham Young and his party of 143 pioneers in 1847, they offered the Mormons the use of the land but had not given them their streams with their fish and beaver. They had also not reckoned with the fact that the white man would fence the land into little squares and tell them to keep out and they had not known that the ever-increasing streams of newcomers would build forts as strongholds among them.

In 1853, relations between the pioneers and the Utes were strained to the limits. In July of that year, three Indians from Chief Walkara’s camp on Hobble Creek appeared at the cabin door of James Ivie near Springville to trade fish for flour. An argument followed and Ivie killed one of the Indians in a hand-to-hand fight with a broken rifle stock.

Walkara, upset with this incident and the Mormons recent policy opposing his lucrative slave trade, grasped the situation and unleashed a hit-and-run reign of terror that plagued the settlements in Utah, Juab, Sanpete, Millard and Iron Counties for the better part of the next year. Ironically, the largest “engagement” of the war was not fought by Walkara but by Pahvant Utes camped at Meadow Creek just at the mouth of Fillmore.

In the fall of 1853, a wagon train of Missourians en route to California camped near the Indian village. When a group of Pahvants approached with bundles of buckskin and offered to trade for tobacco and other goods, settlers surrounded the party and they attempted to disarm them. A fight ensued and the father of the Pahvant War Chief Mosnoquap was mortally wounded by a gunshot to his side.

In retaliation, Mosnoquap ambushed a United States Army Survey Team in bivouac near Servier Lake some 35 miles northwest of Fillmore. Captain John W. Gunnison and 8 of his men died as the Pahvants attacked with a barrage of arrows and bullets as the morning sun rose on the army camp.

When word of the battle reached Fillmore several days later, White officials traveled to the site with Kanosh, Chief of the Pahvant Utes. Kanosh, long considered a friend of the pioneers, was sickened at the sight of the mutilated remains of Gunnison’s men. After ordering the appearance of Mosnoquap, Kanosh admonished the war chief for his actions. Although reproved for his role in the battle, the war chief was never surrendered by Kanosh to either Brigham Young or a U.S. Army detachment which had been sent to the Utah Territory to keep peace.

With the approach of spring of 1854, the Utes had grown tired of the fighting, and Walkara found the ranks of supporters growing ever thinner. Governor Young, recognizing the opportunity of the moment, arrived at Walkara’s camp on Chicken Creek near Nephi on May 22, with a contingent of 50 mounted militiamen and 100 wagons filled with gentlemen, their wives and families. The chief was presented with 16 head of oxen, blankets, clothing, tobacco, whiskey, trinkets, arms and ammunition. During negotiations that lasted into the night, the Utes agreed to cease all hostilities against the white man.

Marker Topic: change
Address: 400 N. 100 East
City: Levan
County: Juab
Marker Text: In July 1853 a trade of fish and flour between an Indian and Mrs. James Ivie ended in a skirmish when one Indian died. Chief Walker refused a peace offer of ponies, beef, flour and blankets unless Mr. Ivie stood trial by Indians and raids began. Colonel George A. Smith supervised the defense. War cost the lives of many Indians, 19 settlers, and the massacre of Captain Gunnison’s military exploring party. In May 1854 Pres. Brigham Young and Chief Walker signed a peace treaty at Chicken Creek.