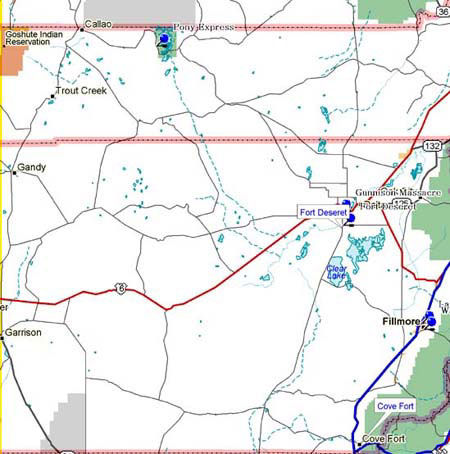 Marker Topic: Fort Deseret
Address: S. Hwy 257
City: S. Hwy 257
County: Millard
Marker Text: Erected in 1866 of adobe mud in 18 days by two teams of 98 men as a defense against Pahvant Indians in the Black Hawk Indian War. Wm. S. Hawley and Isaac W. Pierce, foremen; John W. Radford, Supt. Opening celebration July 25, 1865, The fort was 550 feet square, bastions at Northeast and Southwest corners and gates in the middle of each wall. Made of adobe mud and straw mixed by the feet of  oxen, when completed were 10 feet high, 3 feet wide at base and 1 1/2 feet at top, resting only on a stone foundation.

Marker Topic: Gunnison Massacre
Address: W. Hwy 6 and 50
City: Hinckley
County: Millard
Marker Text: In 1853, Captain John W. Gunnison was selected to lead an expedition to find a trans-continental railroad route. He followed the Old Spanish Trail through Salina Canyon, over the mountains to Pahvant Valley, and upon reaching Fillmore, visited his friend, Bishop Anson V. Call. Gunnison made friends in Utah while serving with Howard Stansbury’s mapping expedition in 1851.

Bishop Call warned him of Indians near the Sevier River because an old Indian brave in the Kanosh Tribe had been killed by members of a California-bound wagon train. Moshoquop, son of the dead brave, had vowed to avenge his father. Gunnison knew Kanosh and Moshoquop as friends, but they did not know of his return to Utah.

On the evening of October 28, 1853, Gunnison and his party made camp on the bank of the river. They took a few shots at migrating wildfowl. Two Indians heard the shots and crept near enough to see the military uniforms and army equipment, but no close enough to recognize the men. The Indians reported the news, and during the night plans were made and the camp was surrounded.

At daylight the cook made a fire, Gunnison went to the river to wash up, and men began working with the horses. As the sun appeared over the mountain the first shot was fired. Three men escaped on horses, although one fell and had to hide in the brush. One man swam the river and hid in the willows. Eight men were killed by guns and arrows. The survivors made their way to Fillmore and reported the tragedy. Gunnison’s body was taken to Fillmore for burial. William Potter, a Mormon guide, was buried at his home in Manti. Six men rest in a common grave at this site.

Marker Topic: Boyd Springs Pony Express Station Here He Comes
Address: Fish Springs, near Pony Express Trail
City: Fish Springs
County: Juab
Marker Text: “Every neck is stretched further, and every eye strained wider, away across the endless dead level of the prairie a black speck appears against the sky, and it is plain that it moves well, I should think so! In a second or two it becomes a horse and rider, rising and falling, rising and falling - sweeping toward us nearer and nearer -  growing more and more distinct, more and more sharply defined - near and still nearer, and the flutter of the hooves comes faintly to the ear - another instant a whoop and a hurrah from our upper deck a wave of the rider’s hand but no reply and man and horse burst past our excited faces, and go winging away like a belated fragment of a storm. So sudden is it all and so like a flash of unreal fancy, that but for the flake of white foam left quivering and perishing on a mail sack after the vision had flashed by and disappeared, we might have doubted whether he had seen any actual horse and man at all, maybe.”
- Mark Twain, “Roughing It”

April 6, 1860-October 1861
Competing with time, distance, harsh climate, and hostile Indians, the Pony Express carried important communications from the east to the west across 2000 miles in only 10 days. The Pony as it was called is an outstanding example of American courage, endurance and determination in the westward expansion of the nation. Speeding mail and news across the country, the Pony was then a vital lifeline of the nation. It is credited with playing an important part in preserving our nation by keeping California in the Union at the outbreak of the Civil War.

Completion of the transcontinental telegraph line in 1861 put an end to the Pony Express. The “Talking Wire met the need for urgent communications and the overland stage served for general letters. Despite its high prices (up to $5 an ounce at its peak) the Pony Express was a losing enterprise from its beginning. Receipts were often high, but expenses were enormous. In spite of its contributions to the Union and the westward expansion, the Pony never received any financial assistance from the government. Yet its founders, William H. Russell, Alexander Majors, and William B. Waddell, felt the need was important, and the Pony Express operated in the red until it went out of business on October 28, 1861, four days after the first coast to coast telegraph message.

Pony Express relay stations were from 10 to 35 miles apart along the route and each had 2 to 4 men and extra horses. About 500 of the heartiest western horses were bought at prices up to $200 each. There were about 80 riders in all and they were recruited from the most daring, determined, and toughest “wirey young fellows” in the west. Lightly equipped and armed with a Navy Colt revolver, each man rode at least 35 miles in each direction, changing horses at three relay stations along the way. Over his saddle the rider carried the mochila, a leather cover with four mail pouches for letters. He wasted no time at the relay stations, stopping only for water and to transfer the precious mochila onto a waiting horse. Day and night, good weather and bad, winter and summer, the Pony riders covered 10 to 15 miles an hour on their routes.

Surprisingly, over the 18 months the Pony operated, only one mail pouch was lost. Service was held up for only one month during the Indian wars. Historic sites like these along the Pony Express route have been interpreted for your enjoyment as part of the nation’s bicentennial observance of the American Revolution. To aid in following the Pony Express route, concrete and wooden posts mark the actual trail.

Known as Butte or Desert Station in the days of the Pony Express, this Pony Station gets its present name from Bit Boyd, a station keeper who continued to live here in the early years of this century. Life at the station was isolated and lonely. The daily routine of the station keeper, spare rider and blacksmith centered on caring for the horses and almost immediate departure of 2 riders each day. Living conditions were extremely crude.