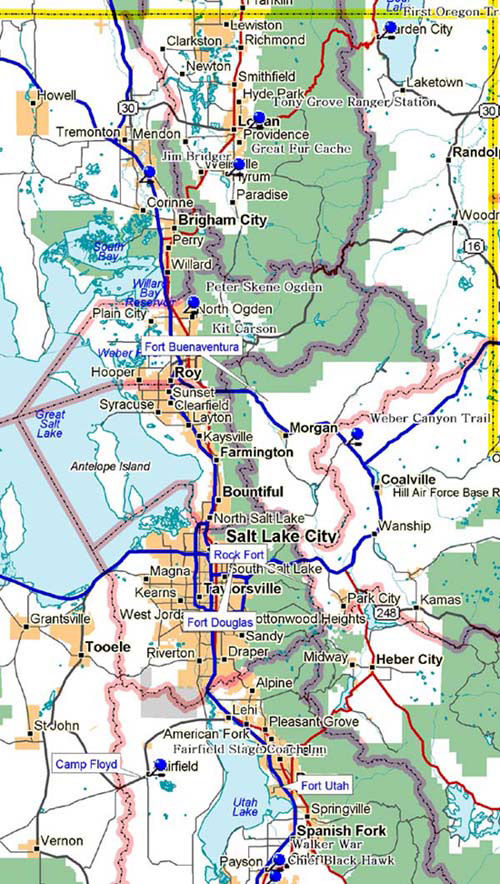 Marker Topic: In honor of Jim Bridger, 1804-1881
Address: Near N. Hwy 13
City: Bear River City
County: Box Elder
Marker Text: Early western fur trapper, frontiersman, scout and guide. To settle a wager among the trappers who were making their first winter rendezvous at Cache Valley, Bridger floated alone in a bull boat down Bear River to its outlet to determine the river’s course in the late autumn or early winter of 1824, thus making the original discovery of Great Salt Lake but believing he had discovered a salty arm of the Pacific Ocean, he halted at such viewpoints as this en route to reconnoiter.

Marker Topic: Black Hawk - Ute Indian Chief
City: Spring Lake
County: Utah
Marker Text: When the Ute Indian Chief, Black Hawk, died on September 27, 1870 near Spring Lake and was buried by his tribe in a nearby ravine, there was laid to rest a man designated by Brigham Young as “The most formidable foe amongst the Redman” that the pioneers had encountered in many years. These words were prompted by the memory of Chief Black Hawk’s part in Utah’s worst Indian war which ended in 1867.

The war commenced in April 1865 at Manti, Sanpete County. Three years later when the Indians were finally brought to term, 51 settlers had been killed and 25 settlements abandoned in five counties. The seriousness of the Indian depredations was such that during the three-year war over 2700 men of the Territorial Militia were called into service. Expenses incurred during the war were in excess of 1.5 million dollars. Although scatteNative American raids continued into the summer of 1868m the Black Hawk War was regarded as officially closed in 1867.

Marker Topic: First Oregon Trail
City: Garden City
County: Rich
Marker Text: The first covered wagons came into the Rocky Mountains in 1830; they made their way as far west as Fort Washakie in Wyoming. Efforts were made to find passable wagon trails through the mountains to the Pacific Coast, which goal was finally reached. At that time, the entire northwest mountain area was known as Oregon Country and western travel was either to the “Oregon” or the “California” regions.

While early maps give the probable location of the first Oregon Trail north of here, well marked wagon ruts and stories of Indians and settlers indicate that the first wagon migration to “Oregon” followed the southwesterly shores of Bear Lake, leaving this valley through a canyon to the Northwest, then to the upper reaches of the Bear River. Additional color is given this belief because this was the site of an important trappers’ rendezvous as early as 1827 and well marked trails were followed for many years in and out of this valley.

Marker Topic: Great Fur Cache
Address: 33 W. Main Street
City: Hyrum
County: Cache
Marker Text: This was an important episode in the early history of the west and to honor the scouts and explorers of earlier days. In this vicinity in the winter of 1825-26 a cache containing 75 bales of furs, mostly beaver, with a value estimated at $150,000 was made by Jim Bridger, Jedediah Strong Smith, William L. Subletter, and others who had come west with General W.H. Ashley. Later most of the furs were taken by pack train and water to the fur makers at St. Louis.

Kit Carson carved a cross (still visible) in the rocks on the highest point on the island which the party named “Disappointment,” but now bears the name of Fremont Island. In 1845, a Fremont party guided by Carson explored central Utah and Great Salt Lake. Their greatest feat was crossing the Great Salt Lake desert en route to California, the trail followed in 1846 by the Donner Party. Carson became an Indian Agent and Army Officer. He died at Fort Lyon, Colorado, May 23, 1868.

Marker Topic: Peter Skene Ogden, Trapper, Trader, Explorer
City: Pleasant View
County: Weber
Marker Text: Peter Skene Ogden, son of a loyalist of the Revolutionary War days who fled to Canada as a British sympathizer, was one of the most courageous and gallant of the fur trappers, traders and explorers of the early west. In the struggle between the United States and Great Britain for supremacy in the Rocky Mountains, Ogden was chief field captain for the powerful British-owned Hudson Bay Fur Company. He was charged with over-trapping the Rocky Mountains to discourage the westward advancing Americans.

In May of 1825, a party of American trappers confronted Ogden at nearby Mountain Green, informing him (falsely) that he was on American soil, and ordered him to leave. Ogden staunchly defended his rights in this yet nonceded territory, but was forced to withdraw when 23 of his men deserted with approximately 800 beaver pelts. Unusual among trappers, Ogden was literate and left an excellent journal of his struggles in Utah where Ogden City, Ogden Canyon and Ogden Valley now honor his name.

Marker Topic: Tony Grove Ranger Station
City: Logan Canyon
County: Cache
Marker Text: “We pass through a region of the wild desolation”
On May 24, 1869 ten men led by Major John Wesley Powell launched four wooden boats at Green River, Wyoming. The voyage explored the last unknown region of the United States, the Green and Colorado Rivers. When they passed this point on July 7, 1869, one boat had been wrecked and one mad had quit the expedition. Powell named the canyons Flaming Gorge, Lodore, Split Mountain, Labyrinth, Cataract, Glen and the Grand.

To commemorate the centennial of the Powell exploration, Desolation Canyon was dedicated a National Historical Landmark. This canyon was selected as the landmark because it is the least changed from Powell’s time. There is no physical evidence that Powell’s party was ever here. No structures, no writing on the rocks. Expedition notes and journals remark favorably on the natural beauty and traces of past civilizations found here.

Marker Topic: Walker War
City: Payson
County: Utah
Marker Text: “You are a fool for fighting your best friends, for we are the best and only friends that you have in the world,” wrote Brigham Young to the Ute Indian Chief Walkara in 1853 after the latter had engaged the settlers of Utah in their first major Indian war. Angered because the whites had put an end to the Indian slave trade in the territory and had encroached upon their lands, the red men found a pretext for beginning hostilities at Springville, July 17, 1853, when an Indian, while beating his female tribesperson, was killed by a white man.

The following day Alexander Keele, a guard at Payson, was shot by Indians and the war was on. The policy of the white defenders was one of vigilant watch and limited offensive warfare. However, before Governor Brigham Young led a peace mission into Walkara’s camp in May 1854 that ended the conflict, 20 whites had been killed, including the U.S. Government surveyor Captain John W. Gunnison, who was massacred with 7 of his men hear the present site of Hinckley, Utah.

Marker Topic: Weber Canyon Explorer's Trail
City: Henefer
County: Summit
Marker Text: Weber Canyon has always been the most important gateway into the valley of the Great Salt Lake. Through its portals passed many important persons of early Utah history, including John Weber, a trapper who is supposed to have been killed by Indians in the winter of 1828-29, Etienne Provost, who in 1824 reported one of the first explorations of the river, and Osborne Russell, who reported explorations in 1841.

In 1846 California emigrants took the first wagons down the Canyon, encountering great hardship and suffering severe losses. They included the Hudspeth, Bryant-Russell, and Young and Harlan parties. In this vicinity, the Donner-Reed party of 1846, which later met a tragic fate on the east slope of the Sierras in California, turned southwest and blazed a trail through the mountains to the Salt Lake Valley. This trail was followed by the Mormon Pioneers (1847), the California “Gold Rush” Emigrants (1849-50), the Mormon Handcart Pioneers (1856), Overland Stage (1856), and the Pony Express (1860-61).