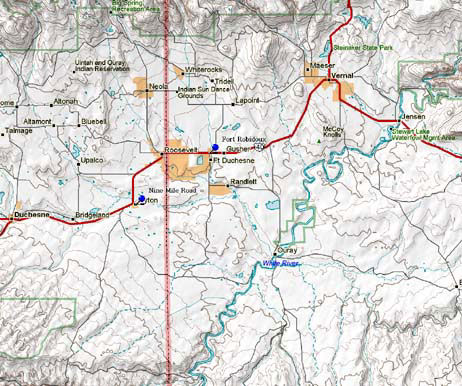 Marker Topic: Fort Robidoux
Address: 5750 W. Hwy 40
City: Fort Duchesne
County: Uintah
Marker Text: The first yearlong abode of white men in what is now Utah was Antoine Robidoux Indian and fur trading post (Fort Whitney or Uintah) which was about 8 miles north of here in 1832. It was on the trail from Taos, New Mexico to the Pacific Northwest and from Utah Lake to the Platte River region. Many trappers traded and wintered here. Several distinguished traders sojourned here including Kit Carson, Joseph Williams, Rufus B. Sage, Marcus Whitman, A.L. Lovejoy and John C. Fremont. All prior to the burning of the fort by Indians in 1844.

Marker Topic: Nine Mile Road
Address: 6000 W. 9450 South
City: Myton
County: Duchesne
Marker Text: The Nine Mile Road was built by the all black 9th U.S. Cavalry under the command of Major F. W. Between in 1886-87. With altitudes less than 7400 feet it was considered “all season” and linked Fort Duchesne, Utah with the nearest railhead, Price, Utah. Referred to in official army records as the “Nine Mile Road,” it was named after the largest and most beautiful canyons through which it meanders.

Rich in history and legend it as been proclaimed the greatest contribution the army made in the Uintah Basin. When the Uintah-Ouray Indian Reservation was opened to non-Indian settlement in 1905, this was the main route taken by over 15,000 homesteaders. It was traveled by such famous names as Roosevelt, Sheridan, Randlett, and Benjamin O. Davis, Sr., the first black to rise to the rank of general in the U.S. Armed Forces.

Such infamous characters as Butch Cassidy, Sundance Kid, and other members of the “Wild Bunch” also rode its path. For almost 35 years it was the route of the telegraph line and served the stage coach lines, freighters and the U.S. Mail. By 1920 the Nine Mile Road ceased to be the main artery into the Great Uintah Basin Utah.