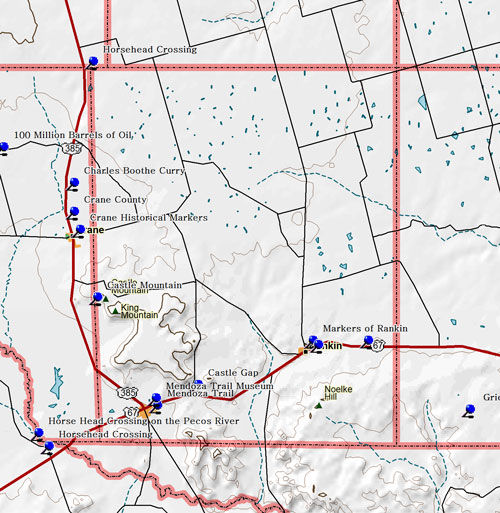 Marker Title: Castle Gap
Address: US 67, E of McCamey
City: McCamey
County: Upton
Year Marker Erected: 1962
Marker Location: On US 67 about 5 miles E of McCamey
Marker Text: Castle Gap, famous early pass for southwestern trails, lies 14 miles northwest along the Upton-Crane County line. Through this mile-long gap between Castle and King mountains flowed the full panorama of Texas history-- Indian, Spaniard, Stage and Trail Herd Driver, Settler, '49er. In prehistoric time Castle Gap was a landmark for nomadic Indian tribes and later guided the Commanches on their war trail into Mexico. The first white man to discover the pass was probably the Spanish explorer Felipe Rabago y Teran in 1761. Then came the '49ers in their frenzied rush to the California gold fields, to be followed by other, more permanent settlers. From 1858 to 1861 the famed Butterfield Overland Mail coaches rumbled through the pass on their 24-day journey from St. Louis to San Francisco, pausing briefly at the adobe-walled Castle Gap station for fresh teams. Then they were off again, fording into the sunset. By 1866 the Goodnight-Loving cattle trail was firmly established at the gap, funneling tens of thousands of brawling longhorn cattle to the northern markets. During this same period, legend holds that a treasure-laden aide of Emperor Maximilian of Mexico, fleeing the country when the regime collapsed, buried gold and jewels in the area. Dust of the pioneers settled long ago. Today Castle Gap slumbers peacefully, disturbed only by visitors, occasional treasure hunters and those who probe for ruins of the Butterfield station and the rapidly fading ruts of coach and wagon.