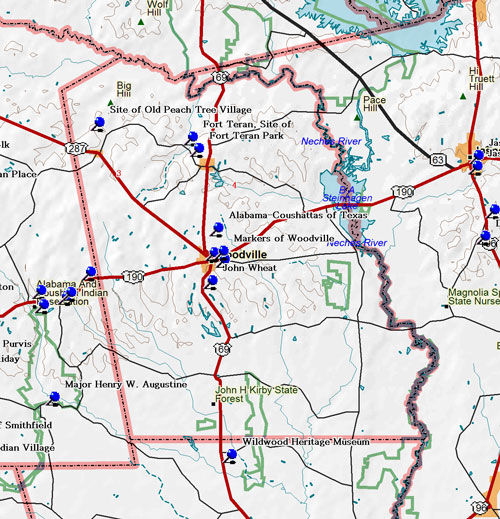 Marker Title: Alabama-Coushattas of Texas
County: Tyler
Year Marker Erected: 1964
Marker Text: Two tribes, welded into one in their wanderings. Visited Texas briefly in 1816, at Peach Tree Village, Tyler County, before swinging back into Louisiana. Seeking land to call their own, however, returned and made first home in Texas on this site, from 1836 to 1844, under leadership of First Chief Colabe Sylestine and Second Chief Antone Sylestine. Tribe built log cabins for chiefs and lean-tos of bark and wood for rest of the people. Settlement locations had to be carefully selected. As place for important tribal gatherings, an open field of deep sand had to be situated at center of every village. Here were held tribal pow-wows and ceremonial dancing, but the field's really popular function was as the ball park. Ball playing among the Alabama-Coushattas was a form of lacrosse, in which a long-handled racquet was used to catch, carry or throw a hard ball past the goalee. Women of the tribe, when they played, used no racquet-- only their hands. Known as migrants, rather than agricultural Indians, the Alabama-Coushattas nevertheless were Texas settlers who contributed to the culture of the state.

Marker Title: Fort Teran, Site of
City: Chester
County: Tyler
Year Marker Erected: 1936
Marker Location: This marker is only accessible w/4 wheel drive but has been reported as in good shape and is located on TDOT map. 11 mi NE of Chester FM 1745.

Marker Title: Site of Old Peach Tree Village
City: Chester
County: Tyler
Year Marker Erected: 1966
Marker Location: FM 2097 2.5 mi N of US 287
Marker Text: In the early 19th century, the Alabama Indians -- then a large tribe -- made their headquarters on this site, and called their village "Ta-Ku-La," which meant "Peach Tree." Two trails blazed by early pioneers crossed here. A north-south trail came from Anahuac on the Gulf of Mexico, over the Neches River, leading onward to Nacogdoches; The other ran east-west from Opelousas, Louisiana, through what is now Moscow, to present Huntsville, then west to San Antonio. Other trails diverged from this: to the Galveston Bay area, San Felipe de Austin, and Goliad. The crossing of the trails made this a trading center of importance. With the coming of white settlers, the Alabama Indians withdrew, and the remnant of that tribe is now located about 15 miles south -- occupying the only Indian reservation in Texas. In Old Peach Tree village, some historic homes are marked. It is also site of the Kirby museum, founded by John Henry Kirby (1860-1940), who was born here, and whose career included service as a legislator, as well as leadership in lumbering, banking, oil development and railroad building.

Marker Title: Tyler County Courthouse
Address: 100 W. Bluff St.
City: Woodville
County: Tyler
Year Marker Erected: 2000
Marker Text: After the creation of Tyler County in 1846 and the subsequent selection of Woodville as county seat, this block was set aside for use as the courthouse square and the first courthouse was completed by February 1849. In November 1890, the Tyler County commissioners court, with county judge Henry West presiding, elected to build a new center of county government and authorized the sale of bonds to finance the construction. The Corpus Christi architectural firm of Glover and Hodges designed the new courthouse in typically eclectic Victorian-era fashion, incorporating elements of the Second Empire, Gothic and Mediterranean styles. Despite problems during construction in 1891, contractors M. A. McKnight and McKnight completed the courthouse in early 1892. In 1935-1937 the county undertook a massive courthouse remodeling project with Works Progress Administration funds. Efforts to modernize the building at this time resulted in the removal of its more high style elements and the construction of a rear addition. Character-defining features from the original design, such as the windows and central tower remain, however. The Tyler County courthouse stands as a symbol of county government and a center of public and governmental activities. Its evolution from original design to current appearance is a part of the county's history and the building's service to the people of Tyler County. Recorded Texas Historic Landmark - 2000

Marker Title: John Wheat
City: Woodville
County: Tyler
Year Marker Erected: 1974
Marker Location: Mt. Pisgah Cemetery on US 69, 3 mi. south of Woodville.
Marker Text: (August 7, 1813 - April 24, 1889) A native of Lawrence County, Ala. Migrating to Texas in 1835, Wheat located his headright and bounty lands here, and named many Tyler County creeks while hunting bear and other game. A soldier in Texas War for Independence, he guarded a Mexican officer prisoner after Battle of San Jacinto. He donated land for this cemetery, and served as county commissioner in 1852-54. Married four times, he had several children, and left to descendants many legends of the early days.