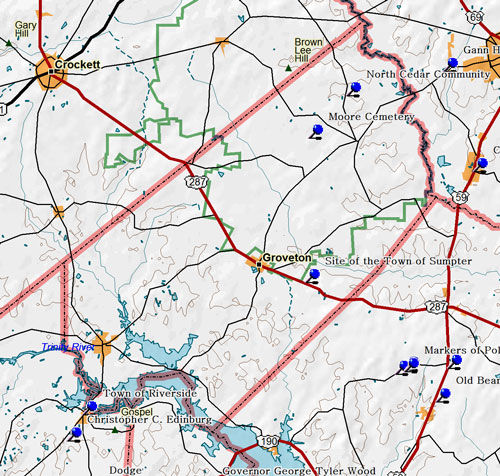 Marker Title: Moore Cemetery
County: Trinity
Year Marker Erected: 1996
Marker Location: 12 miles northeast of Groveton on SH 94, then 4 miles on FM 358, right 3 miles on Moore Cemetery Road
Marker Text: South Carolina native John W. Moore (1810-1898), his wife Rosella Meredith (1811-1878), and their family migrated to East Texas in the 1850s. From their initial 320-acre land grant on Mossy Creek, the Moores donated nearly six acres of land for a community cemetery. The earliest recorded burial was that of Sidney Craddock in 1860. Among the first burials in the Moore Cemetery were those of Preston W. Moore and William Moore. It is believed that these brothers, sons of John and Rosella Moore, were hanged for refusing to become Confederate soldiers in the Civil War, and are buried here. Trinity County citizens were strongly in favor of the Confederate cause, and many of the County's young men had marched off to serve the Confederacy. Many infant burials in this cemetery are the result of disease epidemics occurring in surrounding communities. Although more than 120 graves are recorded here, many unmarked graves also exist. Among the burials are veterans of the Civil War, World War I, World War II, the Korean War, and the Vietnam War. Maintained by the Moore Cemetery Association, the graveyard continues to serve Groveton and the surrounding communities.

Marker Title: North Cedar Community
City: Groveton vicinity
County: Trinity
Year Marker Erected: 2000
Marker Location: 18 miles east of Groveton on SH 94, then 4.5 miles north on FM 2501 (North Cedar Road) to New Church Road
Marker Text: Among the first pioneers to settle the area that became North Cedar Community was Abner Womack, who arrived here with his family in 1856. Benjamin and Susan Burke and their children reportedly slept in tree houses for fear of animal attacks while slaves built their log house. The widowed Mary (Boon) Roach arrived with four of her sons in 1865. Another son, William, rejoined the family after serving in the Confederate Army during the Civil War. North Cedar Community soon became a small enclave of Confederate supporters. Many had left the ravaged southern states, particularly Mississippi, in search of new beginnings. Many in the area were destitute after the war, but the community continued to grow. In 1875 the nondenominational Williamson Cemetery Church was organized on the grounds of the existing Williamson Cemetery. Womack School, established in 1884, was first taught by Marion Jefferson "Jeff" roach. Though most residents continued to farm, Southern Pine Lumber Company provided jobs for many in North Cedar Community from 1900 to 1912. The Civilian Conservation Corps built and maintained roads, fire lanes and bridges during the Depression era, making the North Cedar Community more accessible in any weather. Few area farms were more than 100 acres, making them too small to bear the expense of modern agricultural machinery. The school was consolidated with Apple Springs Schools in 1939, and most young people moved to the cities to support the World War II homefront effort. Farms were consolidated into larger parcels more suited to cattle raising, and paper companies bought much of the former lumber lands. In the early 21st century, all that remained of North Cedar Community were a few scattered houses. (2000)

Marker Title: Site of the Town of Sumpter
County: Trinity
Year Marker Erected: 1985
Marker Location: 4.6 miles east of Groveton on US 287
Marker Text: The legislature of the State of Texas created Trinity County out of Houston County in 1850. A group of seven commissioners was appointed to locate and survey a site for the seat of government. The town of Sumpter was founded in this area, near the geographic center of the county. Trinity County's first seat of justice grew slowly. Early settler Solomon Adams operated a small general store, and his log home also served as a hotel. The courthouse was a small frame building located on the plaza, near which a log schoolhouse was erected. When Goodwin Woodson and R.D. Crow opened a saw and grist mill four miles south of Sumpter in 1857, the town began to develop rapidly and was incorporated five years later. As the population increased, a larger courthouse was built. An influx of businesses, such as drugstores and saloons, appeared on around the courthouse square. A number of plantations flourished in the area until the coming of the Civil War. In 1872, the courthouse at Sumpter burned, and a rail line was built through the town of Trinity. Sumpter was gradually abandoned, and the nearby cemetery is all that remains of the once-thriving community.