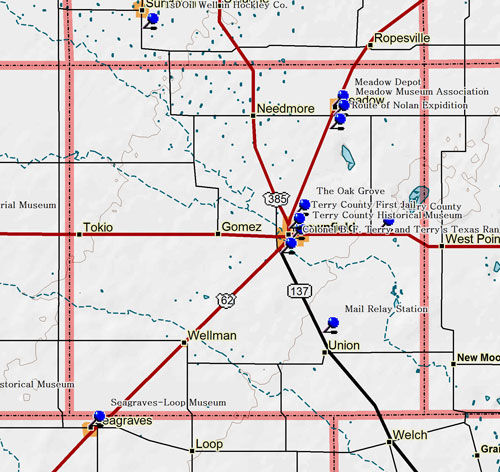 Marker Title: Meadow Depot
Address: Meadow Park
City: Meadow
County: Terry
Year Marker Erected: 1975
Marker Location: Meadow Park, Meadow.
Marker Text: Meadow was founded in 1904 on public land grazed by L-7 Ranch herds; village moved to this site on the Santa Fe Railway line in 1917. Soon settlers were arriving with livestock in one end of a boxcar, furniture in the other. A boxcar was used as a station. This depot was built in 1911 at White Deer (200 mi. NE), moved here in 1923, used until 1965, then given to the community and relocated in the park (1967) as a relic of the town's early development. Recorded Texas Historic Landmark, 1975.

Marker Title: Terry County's First Jail
Address: 608 E. Cardwell
City: Brownfield
County: Terry
Year Marker Erected: 1975
Marker Location: 608 East Cardwell, Brownfield.
Marker Text: Terry County, organized in 1904, had no jail facility until this frame structure was erected in 1916 on the southeast corner of the courthouse square. The one-room building with two steel cells was replaced in 1926 by a jail located on the top floor of the new courthouse. This small structure then became property of A. T. Fowler, who moved it to his farm in the 1940s. The outside walls were plastered and the interior used for storage. Given to Terry County Heritage Museum in 1974 by A. T. and Terrell Fowler, the old jail was transferred to this site and restored.