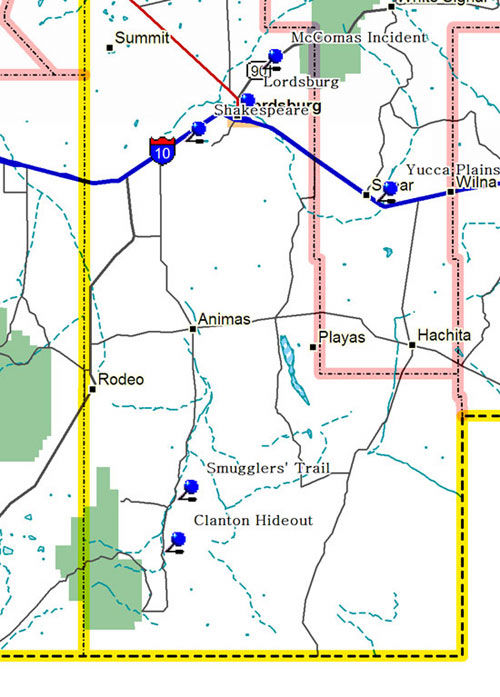 The infamous Clanton Gang had two crude dugouts here in the 1880s that served as hideouts and a base for wide-ranging outlaw activities, particularly in connection with the Curly Bill Gang's depredations along the Smuggler's Trail that passed by here. Old Man Clanton was ambushed below the border in revenge for a Skeleton Canyon massacre.

Lordsburg was founded in 1880 on the route of the Southern Pacific Railroad, near that used by the Butterfield Overland Mail Co., in 1858-1861. It eventually absorbed most of the population of Shakespeare, a now-deserted mining town three miles south.

In March 1883, Jude and Mrs. H.C. McComas were killed in this vicinity by a group of Chiricahua Apaches led by Chatto. An extensive manhunt failed to rescue their six-year-old son, who had been taken captive. This incident was part of a violent outbreak toward the end of the Apache wars.

After a silver strike in 1869, a townsite was laid out at the old stage stop of Mexican Springs. Named Ralston City, a diamond swindle caused its collapse in 1874. The town was revived as Shakespeare in 1879, but the depression of 1893 closed the mines and made it a ghost town.

Smugglers once crossed this area with mule trains of contraband from Mexico, to be traded for merchandise n Arizona. In the summer of 1881, a group of Mexican smugglers was killed in Skeleton Canyon by members of the Clanton gang, including Old Man Clanton, Ike and Billy Clanton and Curly Bill.

Wide alluvial plains of southwestern New Mexico are feature of Basin and Range province with isolated fault block mountains scattered like islands from a sandy sea. Volcanic rocks form most of Cedar Mountains to south and Pyramid Mountains to west but Burro Mountains to northwest are mainly ancient granites.