Back to Southeastern New Mexico Maps 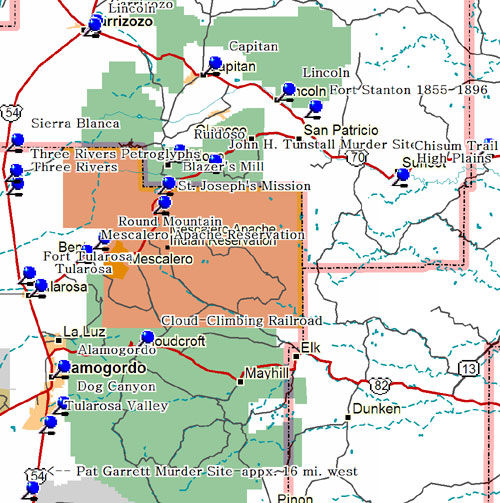 In 1898 the brothers Charles B. and John A. Eddy, promoters of the El Paso and Northeastern Railroad, laid out and platted a town here. Alamogordo served as a junction with a railroad line to the lumbering operation in the Sacramento Mountains. The first atomic bomb was exploded 60 miles northwest of here on July 16, 1945.

An early fight in the Lincoln County War occurred near this sawmill on April 5, 1878, when several men of the McSween faction, including Dick Brewer and Billy the Kid, attempted to arrest Buckshot Roberts. Roberts and Brewer were killed, and two others wounded, in the battle that followed.

Many incidents in the Lincoln County War, 1876-79, occurred in the area around Capitan. The promoters Charles B. and John A. Eddy platted the townsite in 1900, after building a spur of the El Paso & Northeastern Railroad from Carrizozo in order to open the Salado coal fields. The mines were abandoned in 1901.

In 1950, a little bear cub, his feet badly burned, was rescued from a forest fire near here. The cub was nursed back to health and flown to Washington, D.C. to become the living symbol of "Smokey Bear" in the U.S. Forest Service's fire prevention program.

Sometimes confused with the Chisum Trail from Texas to Kansas, the Chisum Trail was used by New Mexico rancher John S. Chisum to supply cattle to the Indian agencies in Arizona. In 1875, Chisum sent 11,000 head over this route, which winds from Roswell to Las Cruces, then roughly follows modern I-10 west to Arizona.

In order to provide timber for the construction of his El Paso and Northeastern Railroad north of Alamogordo, Charles B. Eddy in 1898 built a spur into the Sacramento Mountains. The line operated as far as Cloudcroft until 1947. The Cloudcroft Trestle is all that remains.

For the Mescalero Apaches, Dog Canyon was a favorite camping area and trail through the Sacramento Mountains. It was the scene of several battles in the 19 th century. In 1863, a group of Mescaleros was attacked by soldiers, and the survivors were sent to the Bosque Redondo Reservation.

Fort Stanton, named for Captain Henry Stanton, was established to control the Mescalero Apaches. It was burned and evacuated by Union troops in 1861, held briefly by the Confederates, and then reoccupied by Colonel Kit Carson for the Union in 1862. Since it abandonment as a military post, it has been used as a hospital.

Fort Tularosa was established in 1872 south of present-day Aragon. Two companies of infantry were stationed here to guard the Apaches placed at the Tularosa Southern Apache Reservation. The post was deactivated in 1874 when the Apaches were transferred to another reservation. The fort's garrison was then transferred to Fort Craig, south of Socorro.

You are on the west edge of High Plains, here sloping eastward to Pecos Valley. Foothills of Capitan Mountains are to northwest and Sierra Blanca to west, an ancient 12,003-foot complex volcano. Canyon of Rio Hondo to southwest exposes Permian limestone aquifers that nourish Pecos Valley crops.

In one of the Lincoln County War's earliest violent encounters, John H. Tunstall was shot and killed at a nearby site on February 18, 1878. Tunstall's death set off a series of violent reprisals between his friends, among whom was William "Billy the Kid" Bonney, and forces of the Murphy/Dolan faction of this tragic conflict. Tunstall, an English businessman, came to New Mexico in 1876.

Lincoln was the focal point of the notorious Lincoln County War of 1876-79, a complex struggle for political and economic power. Sheriff William Brady, outlaw Billy the Kid, Governor Samuel B. Axtell and cattle baron John S. Chisum were some of the people involved in this violent episode.

Spanish-speaking settlers established a town here in the 1850s, after the U.S. Army began to control the Mescalero Apaches. First known as Las Placitas del Rio Bonito, the name of the community was changed to Lincoln when Lincoln County was created in 1869.

Center of the turbulent Lincoln County War, 1876-79, a land and cattle feud marked by violence on both sides. Lincoln's historic landmarks include the Murphy-Dolan store, which later became the Lincoln County Courthouse, the store of John Henry Tunstall, whose murder set off the hostilities, and the house of Alexander McSween, where the final battle was fought.

The Mescalero Apaches were named for their use of mescal for food. Their economy, based primarily on hunting, gathering and raiding and trading, the Mescaleros occupied much of south-central New Mexico in the 18th and 19th centuries. Since 1871, the Mescaleros have lived on a reservation of about half a million acres, located on part of their ancient homeland.

Pat Garrett, the Lincoln County Sheriff who shot and killed William "Billy the Kid" Bonney at Fort Sumner in 1881, was himself murdered at a remote site nearby on February 29, 1908. Wayne Brazel, a local cowboy, confessed to shooting Garrett but was acquitted of all charges. The motive and circumstances surrounding Garrett's death are still being debated.

This cone-shaped landmark about 10 miles from Tularosa was once known as Dead Man's Hill, and has been the backdrop for several military encounters. In April 1868 a small group of soldiers and Tularosa settlers engaged in battle with about 200 Mescalero Apaches.

Originally known as Dowlin's Mill, the town was located on the Chisum Trail which ran from the Pecos River to Arizona. By 1885 it had attracted a store, a blacksmith shop, and a post office which was named Ruidoso after the local stream. Several incidents of the Lincoln County War occurred here, including the murder of Paul Dowlin in May 1877.

Sierra Blanca, a complex ancient volcano, rises more that 7,300 feet above Tularosa Basin to peak at 12,003 feet. Vertical geologic movement between ranges and basin is about 2 miles. San Andres Mountains on west side of Tularosa Basin are uplifted on east side and tilted westward.

Father Albert Braun, who directed the construction of the remarkable mission church of St. Joseph, served as chaplain in both World Wars. He first came to Mescalero in 1916, and later built this stone church in memory of Americans killed in World War I. It took him almost twenty years to complete, and was dedicated in 1939.

Located in the Tularosa Basin east of the great lava flows known as the malpais, Three Rivers was one prominent in the cattle empires of Albert Bacon Fall, John S. Chisum, and Susie McSween Barber, "the cattle queen of New Mexico." Charles B. Eddy's El Paso & Northeastern Railroad reached here in 1899.

Three miles to the east is a mile-long array of pictures pecked into the solid rock walls of a volcanic ridge. They include both geometric and animal forms. They were likely made by prehistoric Mogollon Indians between ca. A.D. 1000 and 1400.

The first successful European settlement in the Tularosa Basin dates from 1862, when 50 or 60 Hispanic farmers moved from the Rio Grande Valley. Heavy Anglo settlement began in the 1880s as settlers and cattlemen from farther east began moving into New Mexico. Tularosa appears as "Oasis" in the novels of western writer Eugene Manlove Rhodes.

Spectacular escarpment of Sacramento Mountains to east is of Paleozoic sedimentary rocks, well exposed along Dog Canyon. Tularosa Valley is downdropped about 2 miles relative to Sacramentos and San Andres Mountains on west side of basin Gypsum dunes of White Sands to west occur only in arid climates.

Part of our in-depth series exploring the forts of Northern Early America The Wyoming Valley "massacre" was a military battle in the...