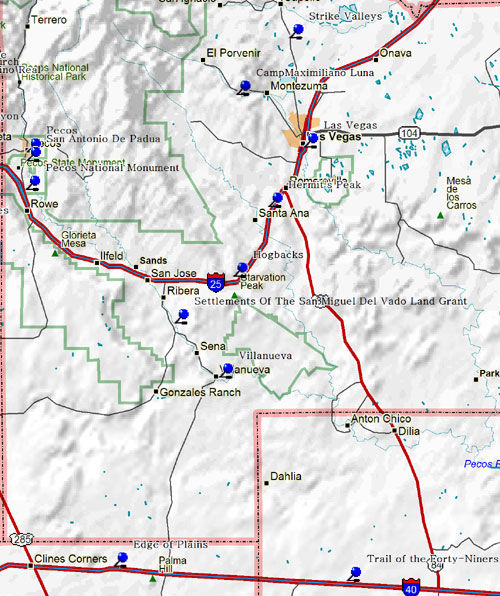 The 200th Coast Artillery, Anti-Aircraft, formerly the 111th Calvary of the New Mexico National Guard, trained here before going to the Philippines in World War II. About half of the men died either on the infamous Bataan Death March of 1942, or in Japanese prison camps afterwards.

From 1863 to 1867 this mountain was the home of Juan Maria Agostini, an Italian penitent who lived there as a hermit, carving crucifixes and religious emblems which he traded for food. Leaving this area, he moved to the Organ Mountains, in southern New Mexico, where he was found murdered in 1869.

Interstate 25 cuts through dipping strata that form hogback ridges between the Great Plains and the south end of the Rocky Mountains. The Santa Fe Trail from here to Santa Fe, followed a natural valley eroded in less resistant strata between the mountains to the north and Glorieta Mesa to the south.

Las Vegas served as an important stop on the Santa Fe Trail and later as a major railroad center. Here General Kearny announced the annexation of New Mexico by the U.S. in 1846. In 1862, during the Confederate occupation of Santa Fe, Las Vegas served as a Territorial capital. New Mexico Highlands University was established here in 1893.

The upper Pecos River Valley was on the frontier of Pueblo Indian civilization from at least the 13th to the 19th centuries, when the nearby Pueblo of Pecos was abandoned. Despite raids by various Plains Indian groups, Spanish-speaking settlers around 1825 founded what is today the village of Pecos.

In 1540-41, this pueblo stood 5 stores high and accommodated a population of 500. Four churches and an additional pueblo were built here in the 1600s and 1700s. Disease and Comanche raids in the late 1700s significantly reduced the size of the community. In 1838, the remaining 17 people moved to the Pueblo of Jemez.

The name Pecos is derived from the name given it by its Keres Indian neighbors, though the Towa-speaking inhabitants called it Cicuye. Excavations in the early 1900s and 1940 provided much information on the history of the pueblo. It has been a National Monument since 1965.

This is one of the fines surviving examples of Bishop Lamy's French-inspired gothic architecture in New Mexico. Completed in 1906, it is constructed of locally quarried stone instead of traditional adobe. Among its adornments is a painting of Nuestra Senora de Los Angels (Our Lady of the Angles), given to the nearby Pueblo of Pecos by the King of Spain in the early eighteenth century.

Between Sapello and Mora, State Road 3 follows a narrow strike valley eroded into soft shale between ridges of resistant sandstone called hogbacks, both the result of uplift of the Rocky Mountains. To the east stretch the Great Plains and to the west, the Sangre de Cristo Mountains rise to elevations exceeding 13,000 feet.

Trail of the Forty-Niners

To give gold-seekers another route to California, Capt. Randolph B. Marcy and Lt. James H. Simpson opened a wagon road from Arkansas to New Mexico in 1849. Marcy's Road, although very popular with the Forty-Niners, still was never as well-traveled as the Santa Fe Trail. Here the route parallels I-40 to Albuquerque.

Originally named La Cuesta by its founders, this village was renamed Villanueva in the late 19th century. It was one of the earliest settlements established along the Pecos River when the San Miguel del Vado Land Grant was approved by the Spanish Government in 1794. The village church, completed by 1830, is an excellent example of 19th century New Mexico religious architecture.