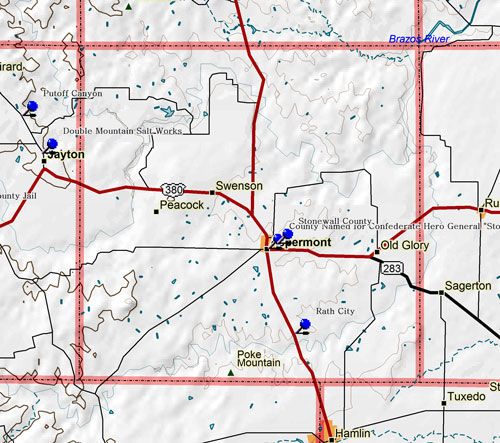 Marker Title: County Named for Confederate Hero General "Stonewall" Jackson 1824-1863.
Address: US 83
City: Aspermont
County: Stonewall
Year Marker Erected: 1963
Marker Location: Northeast corner of courthouse, US 83, Aspermont.
Marker Text: Gen. Barnard E. Bee, a Texan, gave him the famous sobriquet in first Battle of Manassas. Jackson was rallying his men for a charge as other units retreated. Bee, seeing him cried to his men, "There is Jackson standing like a stone wall. Let us determine to die here, and we will conquer." In Battles of Gaines Mill and Malvern Hill, Hood's famous Texas Brigade fought under his command. After Gaines Mill when Jackson saw the strong Union fortified position which the Texans had overrun, he - not known to give praise-said, "The men that took this position were soldiers indeed." Texas in the Civil War Texas made an all-out effort for the Confederacy after a 3 to 1 popular vote for secession. 90,000 troops, famed for mobility and daring, fought on every battlefront. A 2,000-mile frontier and coast were successfully defended from Union troop invasion and savage Indians. Texas was the storehouse of Western Confederacy. Wagon trains laden with cotton - life blood of the South - crossed the state to Mexico to trade for medical supplies, clothing, military supplies. State and private industry produced guns, ammunition, wagons, pots, kettles, leather goods, salt, hospital supplies. Wives, sons, daughters, slaves provided corn, cotton, cattle, hogs, cured meats to the Army, giving much, keeping little for themselves. Erected by The State of Texas 1963.

Marker Title: Rath City
County: Stonewall
Year Marker Erected: 1979
Marker Location: From Aspermont take US 83 about 10 miles south to roadside park, just north of Brazos River Bridge.
Marker Text: In 1876 during an international demand for buffalo hides, Charles Rath (1836-1902) founded this town. He opened the Rath, Lee & Reynolds Mercantile Store. He sold supplies and bought the hides from the buffalo hunters. On one occasion in 1877 there were 1,100,000 hides at his trading post. The town, also known as "Reynolds City", boasted a corral, hide yard, saloon and restaurant. Skins stretched across poles sheltered the hunters. A tower beside the corral was used as a lookout to ward off Indian attacks. By 1879, the buffalo disappeared and the town vanished. (1979)