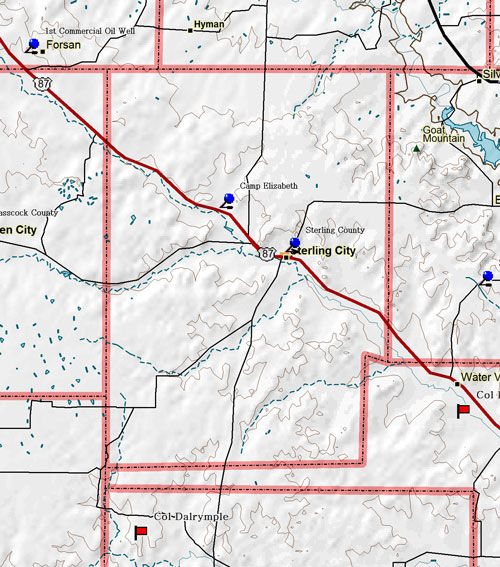 Marker Title: Sterling County
Address: 4th & Elm St.
City: Sterling City
County: Sterling
Year Marker Erected: 1976
Marker Location: Corner of 4th and Elm, Sterling City
Marker Text: This prairie region split by the north Concho River is old Comanche, Kickapoo, Kiowa, Lipan, and Wichita hunting ground. Possibly it was crossed by six or so Spanish explorations between 1540 and 1654. In the 1860s and 70s, Anglo-Americans hunted buffalo commercially in this area. An 1860s hunter, Capt. W.S. Sterling, had a dugout home on the creek that bears his name. In the 1870s, bandits Frank and Jesse James kept horse herds on a tributary of Sterling Creek. In 1874 the United States Army occupied Camp Elizabeth, a Fort Concho outpost hospital, about ten miles west of here. Ranchers from other counties began to bring in large cattle herds in the 1870s, to capitalize on free grass. After keeping out small herds for a time, they permitted actual settlers to share the range. Family men staked land claims, grew crops in the valleys, and opened stores, schools, and post offices. On March 4, 1891, on the petition of 150 citizens, the county was created out of part of Tom Green County, and named for its first regular resident. Sterling City became the county seat. Petroleum production has been important to the economy since the 1950s; yet the land essentially remains range country, grazed by cattle and sheep.