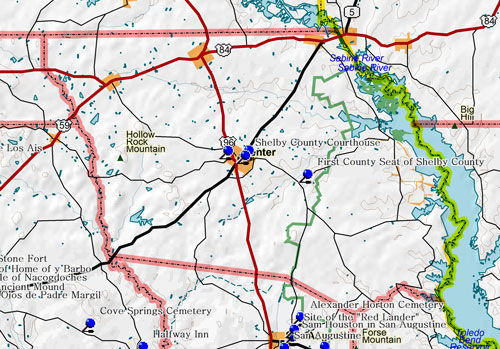 Marker Title: First County Seat of Shelby County
Address: SH 87 and FM 417
City: Shelbyville
County: Shelby
Year Marker Erected: 1973
Marker Text: Shelbyville, once known as Nashville, was the first county seat of government of the District of Tenaha, or Shelby County. The first courthouse stood on this site. The settlement began before 1825. It became headquarters for the "Regulator-Moderator War"; troops were raised here to fight the Indians; for the Texas army; and Confederate forces were organized here.

Marker Title: Milton Irish
City: Center
County: Shelby
Year Marker Erected: 2000
Marker Location: New Hope Cemetery, 2 mi. W of Center on Fm 2974.
Marker Text: (May 7, 1812 - July 15, 1869) Born in Maine in 1812, Milton Irish came to East Texas in 1835 at age 23. His service in the Texas Army in 1835 and 1836 included action with Capt. John English's Company of Shelby County Volunteers and Ben Milam's assault during the Siege of Bexar, as well as Col. James Fannin's command at the Battle of Coleto Creek. Taken prisoner at Goliad, Irish barely escaped the massacre. In 1838 he was granted a headright of 1/3 league in Shelby County and a bounty grant of 640 acres in San Augustine County. He married Emily Eaves in 1845. Irish left to search for gold in California and is believed to have died there in 1869. Emily settled on the Shelby County headright in 1864. She later supported herself and her children with a widow's pension and lands due her as a veteran's wife. Irish descendants became part of Shelby County history. (2000)

Marker Title: C.S.A. Texas Muster
Address: Courthouse Grounds
City: Center
County: Shelby
Year Marker Erected: 1965
Marker Text: Held on this spot April 4, 1964, to honor Texans who made up the greater part of forces fighting in the Civil War Red River Campaign of 1864-1865, that prevented a Federal invasion of Texas. Descendants answering to roll call for soldiers of 100 years ago included 37 sons and daughters of those fighters. Grandchildren, great-grandchildren and other kinsmen represented such leaders as the Trans-Mississippi commander, Gen. E. Kirby Smith, and Gens. A. P. Bagby, John R. Baylor, August Buchel, X. B. deBray, Tom Green, Walter P. Lane, Henry E. McCulloch, Jas. Major, Horace Randal, Wm. R. Scurry, Wm. Steele, John G. Walker, and Thos. Waul; and Cols. Henry Gray, Philip N. Luckett and P. C. Wood. Friends and descendants of the Val Verde Battery restored one century-old gun and brought it from Freestone County to ride in the 8-mile-long parade that moved 36 miles northeastward from here to the Mansfield Battleground. There the cannon shook the earth as it did April 8, 1864, and the assemblage unveiled the first out-of-state marker of the Texas Civil War Centennial, commemorating the Battle of Mansfield.