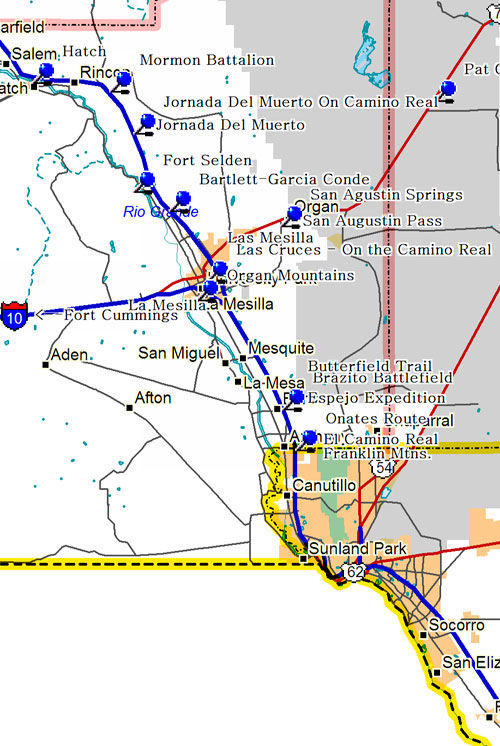 On April 24, 1851, John Russell Bartlett, for the United States, and Pedro Garcia Conde, for the Republic of Mexico, erected near here a monument designating 32 22 north latitude on the Rio Grande as the initial point for the official survey of the U.S.-Mexico boundary. After the Gadsden Purchase, the boundary was moved south.

Stagecoaches of the Butterfield Overland Mail Co. began carrying passengers and mail from St. Louis to San Francisco, across southern New Mexico, in 1858. The 2,795 mile journey took 21-22 days. In 1861 the service was re-routed through Salt Lake City. Here the trail followed the Rio Grande northward to La Mesilla.

The oldest historical road in the United States running over 2000 miles from Mexico City to Taos. Parts of the Camino Real were used by Spanish explorers in the 1580s, but it was formally established in 1598 by Juan de Onate, New Mexico's first colonizer and governor. It was later referred to as the Chihuahua Trail.

Trying to locate two Franciscan friars, Antonio de Espejo in 1582 led an expedition up the Rio Grande near here.   The two friars had remained among the Tiwa Indians near Bernalillo after the Rodriguez-Sanchez Chamuscado expedition returned to Mexico in 1581. When he reached the Tiwas in 1583, Espejo learned that the missionaries were dead.

This small and isolated post was built on the Mesilla-Tucson road to protect the Butterfield Trail against Apaches. Notorious Cooke's Canyon, located nearby, was a particularly dangerous point on the trail. Only ruins now remain of the ten-foot adobe walls which once surrounded it.

Fort Selden was established to protect settlers and railroad construction crews in the Mesilla Valley and the Jornada del Muerto from Apaches. The first regular army troops to garrison it were four companies of the black 125 th Infantry. General Douglas MacArthur spent two years of his childhood here. The fort was finally abandoned in 1891.

Franklin Mountains to east are tilted uplifted block of Paleozoic limestones. Spectacular Organ Mountains to north are mainly igneous rocks, mineralized in places. Paleozoic rocks encountered in oil test to northwest in the Rio Grande trench are 5 miles lower than in mountains, illustrating the Basin and Range geologic structure.

Originally established as Santa Barbara in 1851, Apache raids drove the settlers away until 1853 when nearby Fort Thorn was established. Abandoned again in 1860 after the fort closed, it was re-occupied in 1875 and re-named for General Edward Hatch, then Commander of the New Mexico Military District.

This stretch of the Camino Real leaves the Rio Grande and cuts across 90 miles of desert with little water or shelter. Despite its difficulty, the dreaded "Journey of the Dead Man" was heavily used by Spanish, Mexican, and Anglo travelers between El Paso and the northern New Mexico settlements.

After the Treaty of Guadalupe Hidalgo, which concluded the Mexican War in 1848, the Mexican government commissioned Cura Ramon Ortiz to settle Mesilla. He brought families from New Mexico and from Paso del Norte (modern Ciudad Juarez) to populate the Mesilla Civil Colony Grant, which by 1850 had over 800 inhabitants.

On November 16, 1854, a detachment from nearby Fort Fillmore raised the U.S. flag here confirming the Gadsden Purchase; thus the Gadsden territory was officially recognized as part of the United States. In 1858, the Butterfield stage began its run through Mesilla. During the Civil War, Mesilla was the capital of the Confederate Arizona Territory.

In 1849, following the Mexican War, fields were first broken in Las Cruces. The town became a flourishing stop on the Camino Real, deriving its name, "The Crosses," from the marking of graves of victims of an Apache attack. Las Cruces since 1881 has been the county seat of Dona Ana County.

The Mormon Battalion, composed of 500 volunteers, left Council Bluffs, Iowa, June 5, 1846, as part of the expeditionary force of Brigadier General Kearny. The battalion followed the Santa Fe Trail to Santa Fe and down the Rio Grande near here, where it turned west. The 2000 mile march ended in San Diego, California, January 30, 1847.

Onate's Route On the Camino Real

Juan de Onate, first governor of New Mexico, passed near here with his colonizing expedition in May 1598. Traveling north, he designated official campsites (called parajes) on the Camino Real, used by expeditions that followed. In Onate's caravan were 129 men, many with their families and servants.

Here on July 27, 1861 less that 300 Confederate troops intercepted 500 Union soldiers retreating from Fort Fillmore to Fort Stanton. Exhausted from the heat and famished for water, the Union troops straggled across the desert in a five-mile evacuation train. Unable to fight, Major Isaac Lynde surrendered his command without firing a single shot.