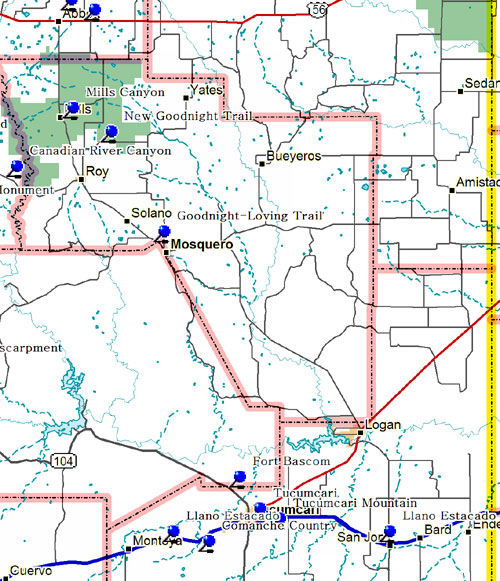 Flowing out of the Rockies, The Canadian River has cut a gorge 600 feet deep through sedimentary strata of the High Plains.

By 1700 the Comanches had acquired the horse and began moving into this area. They drove out the Jicarilla Apaches, and their raids on New Mexico's eastern frontier posed a threat to Indian, Spanish, and Anglo settlements for over a century. The Comanches were finally defeated by the U.S. Army in 1874.

After leaving Fort Sumner, the Goodnight-Loving Trail forked in two directions. This branch, developed by Oliver Loving in 1866, followed the Pecos River to Las Vegas, and the Santa Fe Trail to Raton Pass. The great Texas cattle drives followed this and other routes to Colorado and Wyoming until 1880.

Rising above these red-earth lowlands to the south is the Llano Estacado or Stockaded Plain, a high plateau covering some 32,000 square miles in eastern New Mexico and adjacent areas in Texas. Topographically, it is one of the flattest areas in the United States, and rises to 450 feet above the surrounding Great Plains.

Sediments shed from the rising mountains to the west formed the Llano Estacado, later to be bypassed by streams such as the Pecos and Canadian Rivers and left standing in bold relief with a relatively level, uneroded caprock surface. Croplands on the plain are irrigated using "fossil" water pumped from underground aquifers.

The site of one of New Mexico's most spectacular horticultural enterprises, the Orchard Ranch, established by Melvin W. Mills of Springer and notable for its skillfully engineered irrigation system. The ranch cultivated 12 miles of land along the Canadian River. Vegetable gardens and several thousand fruit trees flourished in the 1880s and later. A destructive flood wiped out orchards, irrigation system, buildings, and other improvements in 1904. There were never replaced.

Charles Goodnight, the great Texas cattleman, used the Trinchera Pass branch of the Goodnight-Loving Trail until 1875. In that year, he blazed this trail northward from Fort Sumner, passing near Tucumcari and Clayton. This was the last trail created by Goodnight, marking the end of his operations in New Mexico.

This area was troubled by both, Comanches and Comancheros, New Mexicans who traded illegally with the Indians, until the military campaigns of 1874. With the coming of the railroad in 1898, the small community of Liberty, eight miles to the north, moved here to form the nucleus of Tucumcari, which was incorporated in 1908.

Tucumcari Mountain has long been a landmark for travelers along the Canadian River. Pedro Vial mentioned it in 1793, while opening a trail between Santa Fe and St. Louis. In order to find the best route from Arkansas to California, Capt. Randolph B. Marcy led an expedition past here in 1849.