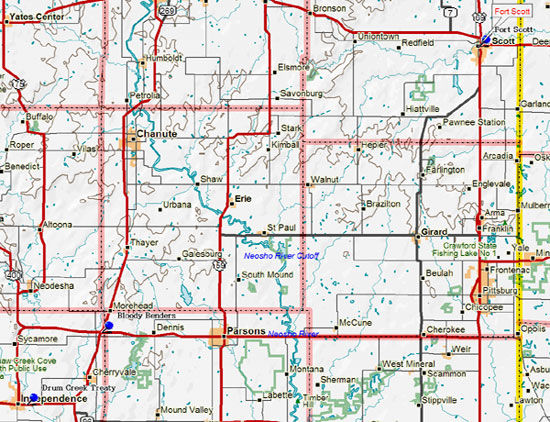 Marker Topic: Bloody Benders
Address: US-400 and US-169 interchange, Rest area, north of Cherryvale
City: Cherryvale
County: Montgomery
Marker Text: Near here are the Bender Mounds, named for the infamous Bender family--John, his wife, son and daughter Kate who settled here in 1871. Kate soon gained notoriety as a self-proclaimed healer and spiritualist. Secretly, the four made a living through murder and robbery.

Marker Topic: Civil War Battle Drum Creek Treaty
Address: US-160, Roadside turnout, one mile east of Independence
City: Independence
County: Montgomery
Marker Text: In May 1863, a mounted party of about twenty confederates, nearly all commissioned officers, set out from Missouri to recruit troops in the West. Several miles east of here they were challenged by loyal Osage Indians. In a running fight two Confederates were killed and the others were surrounded on a gravel bar in the Verdigris River about three miles north of this marker.

Marker Topic: Fort Scott
Address: National Avenue across from Fort Scott National Historic Site
City: Scott
County: Bourbon
Marker Text: This western outpost, named for General Winfield Scott, was established by U.S. Dragoons in 1842. The fort was located on the military road that marked the "permanent Indian frontier" stretching from Minnesota to Louisiana and stood midway between Fort Leavenworth and Fort Gibson. By 1853 the Indian frontier had moved west and troops were withdrawn. Two years later the buildings were sold at auction, and the city of Fort Scott grew up around them.