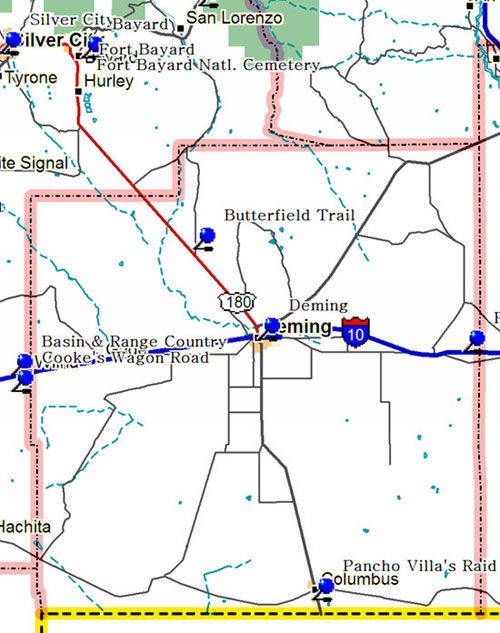 Sites in the surrounding hills indicate that Indians of the Mogollon culture (A.D. 300-1450) lived here long before the Europeans. In the late 19th century, this was a stronghold of Apaches led by Victorio and Geronimo. Today Bayard, which was incorporated in 1925, lies in a great commercial mining region.

Stagecoaches of the Butterfield Overland Mail Co. began carrying passengers and mail from St. Louis to San Francisco, across southern New Mexico, in 1858. The 2,795-mile journey took 21-22 days. In 1861 the service was re-routed through Salt Lake City. From La Mesilla west, the trail paralleled I-10.

In 1846, while leading the Mormon Battalion to California during the Mexican War, Lt. Col. Philip St. George Cooke blazed the first wagon road from New Mexico to the West Coast. The potential of the route for railroad construction was one of the reasons for the Gadsden Purchase in 1854. Cooke entered Arizona through Guadalupe Pass.

In 1780, Governor Juan Bautista de Anza passed near here while searching for a trade route between Santa Fe and the mines of Sonora, Mexico. Deming was founded in 1881 when the Santa Fe and Southern Pacific Railroads were connected to both the Atlantic and the Pacific.

One of the several posts created on the Apache frontier, Fort Bayard protected the Pinos Altos mining district. Company B of the black 125 th Infantry served here, as did Lt. John J. Pershing. In 1900 the fort became a military hospital, and today serves as Fort Bayard Medical Center.

Originally established in 1866 as the military cemetery for Fort Bayard, many troopers, veterans, and civilians are buried here. It became a national cemetery, one of two in New Mexico in 1973.

Silver City is located in the midst of rich mineral deposits. The Santa Rita Copper Mines, opened in 1805, were the second such mines operating in what is now the U.S. A silver strike in 1870 began the commercial mining for which the area is still known. The Apache chiefs Victorio, Geronimo, and Mangas Coloradas figure in its history.